This afternoon Mother of the Child took Pas de Chat, her cat of 23 years (that is not a typo) to the vet to be put to sleep. After about four years of kitty Alzheimer’s and growing completely deaf, Pas de Chat’s quality of life had dropped precipitously over the past few weeks, with no food or water intake for the past several days.

I went to say good-bye (I’ve known Pas de Chat since 1992) and found myself in tears. I suppose death and dying has become a far more immediate and personal topic than it used to be for me. Mother of the Child and the_child will have a Buddhist ceremony later in the back yard.

Pas de Chat’s final portrait, just before they headed out the door… 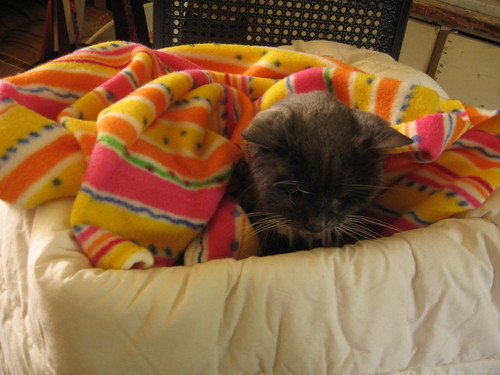