[photos] (Sort of) The Vedauwoo Hike

Sunday morning the Launch Pad crew, or at least most of us, went for a hike at the Vedauwoo rocks outside of Laramie. We hiked around this rock feature (which fills most of the center of that aerial view), which is about a three mile trail a bit above 8,000 feet, with moderate elevation changes.

Having already walked half an hour that morning, I charged right into this hike like nothing had ever been wrong with me. A little less than a mile in, Steven Gould, Paul Witcover and Deanna Hoak decided to do a non-technical ascent of one of the rock faces. I followed them up perhaps a hundred, hundred and fifty feet. We hung around, took pictures, had our pictures took, scrambled down again and resumed the hike.

I haven’t done anything like that since long before I got sick. And it felt amazing. The energy from that hike has buoyed me mentally and emotionally through the day since, even as my body is bitching a bit about the effort expended. Amazing stuff. I feel better than I have since the excellent cancer adventure began.

Unfortunately, I only got a few of the photos loaded before some combination of weirdness between Flickr and the campus network here made uploading impossible. So I will give you this one photo of the area, and with luck post many more tomorrow: 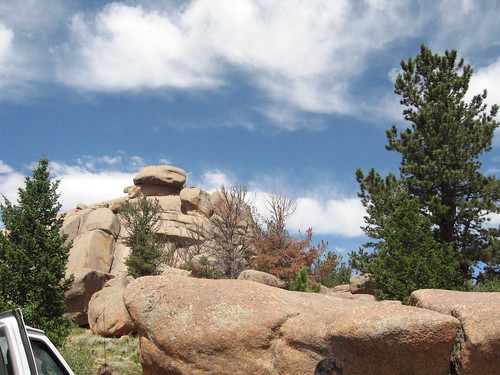