Recent Arrivals - Jay Lake, John Scalzi, Isaac Asimov — Wow is that some company to be mentioned in...

My story prompt is live at Daily Cabal — The first installment. Man, that went a far different way than where I would have gone. Tuesday's story has me laughing fit to pee.

Green on green disputes — A lawsuit over trees and solar panels.

Interpreting ancient meteor strikes — This is a pretty cool article.

Can anyone in the greater Portland metropolitan area recommend a good piano tuner?

the_child is starting to play my ancestral piano in earnest, and has been complaining of how out of tune it is. 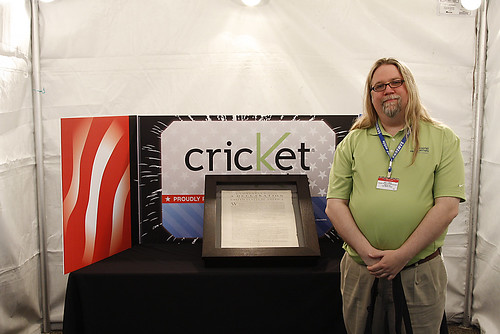 The Angry Black Woman gets very angry. As well she should. Go read. She needs to know how many of us have her back.

The first review of Escapement [ Amazon ] — I've been Klausnered!

The clubhouse question — In which many answers are revealed, including yet another True Account of My Secret Origins.

frankwu, a reminder that the 2008 Locus poll closes 4/15 — You don't have to be a subscriber to vote. And if you liked my stuff, go vote for it!

Several items of a political nature:

I mailed off my updated voter registration today, to declare myself a Democrat. I've been a(n un)registered Independent all my voting life, but I really want to vote for Obama in the upcoming Oregon primary. This is kind of a big step for me — the Democrats are my party of default, not preference, but Barack Obama has become my candidate of preference.

Last week I mentioned going to see Senators Edward and Thompson speak at the CTIA Wireless 2008 show in Las Vegas. It occurs to me that I neglected to report on that experience. Both Senators spoke much better live than I ever saw them do as candidates. (Much like Gore during and after his 2000 concession speech, frankly.) I suppose the stakes are lower now. Both gave relatively political speeches, while touching on the subject of the conference. I thought Edwards was more interesting, and taking a bigger picture stance than Thompson, but both were engaging and entertaining. Both were also more than a little bitter about their campaign experiences. Nothing revelatory, but entertaining and interesting. I'd have been happy to see Edwards be the Democratic nominee, though he was never my favorite in the primary. I never did understand Thompson's candidacy.

I'm still being very frustrated by Hillary's candidacy. So far as I can tell, her strategy is "game the hell out of the superdelegates despite losing the popular vote." That's roughly the Bush 2000 strategy. Yep, it worked for him. Look what that got us. Her increasingly erratic attacks on Obama, not to mention outbreaks of foot-shooting, are mostly serving to strengthen McCain's bid for the White House. Until recently, I thought Democrats had this virtually in the bag. Hillary running a scorched earth campaign is alienating Democrats from each other and driving off independents. If McCain takes the general despite the Republican performance of the last eight years, she's going be a long time living down her role in creating that situation. I'm tired of this.

March was something of a quiet month for writing. I had one short story rejection, two short story acceptances (one not yet announced, if you are counting), and no new submissions. I spent virtually the entire month revising Green, which I managed to turn in on the last day of the month. That was incidentally the tail end of about 18 weeks of continuous, heavy effort on novels, commencing with the first draft of Green, revisions to Madness of Flowers and revisions to Green. I am officially on downtime now, messing about with incidental projects, writing-related program activities, and short fiction.

Later this year I expect to revise Green to editorial direction and first reader input, then revise it again to copy edit. I'll also be revising Madness of Flowers to copy edit. I owe a couple of novellas and several short stories, and I'd like to write at least one more new book this year. Also,

casacorona, but as a practical matter we can't imagine actually writing them until about 2010, given both of our current contract commitments. (Especially his, Mr. Named Lands.)

I had a friend ask me whether I knew of any agents or other professionals who represented work by children into the market. I've never heard of such a thing, though it makes a certain amount of sense. Any of you folks know anything about this.

Lifted from my own comments here (with slight edits for clarity):

The universe is there whether or not we're looking for it. Gravity, thermodynamics, evolution, they all exist in and of themselves. Natural phenomena don't care what we think of them.

God, on the other hand, is an observer effect. He only exists if you're looking for Him. If you don't go looking for God, you'll never stumble over Him. Unlike thermodynamics or evolution.

To my thinking, there's a closed loop to faith that stands outside the physical universe.

I was listening to the Petraeus-Crocker hearings at several points today. Such theater. I'm not sure where the substance lies, but it wasn't in those Senate chambers. One my favorite moments was when Senator Biden asked General Petraeus whether reasonable people could have different opinions about how to prosecute the war. Petraeus told him, "I don't know that I would go that far."

Yep, that's the Bush administration in a nutshell. Nobody else has the answers -- basically, "We're right, you're wrong, fuck off."

I also liked the remark — I did not catch the attribution, but I think it was Ambassador Crocker — that if we withdrew we would endanger our goals in Iraq. It was delivered in a more-in-sorrow-than-in-anger tone that definitely put us woolly headed liberals in our place.

Speaking as a WHL, I feel compelled to point out that if we're staying in Iraq until our goals are fulfilled, it might be nice if we had a consistent set of goals in the first place.

Best as I can recall, this war was officially about WMDs and the possibility that Saddam might supply them to terrorists. Saddam's long dead, and there were no WMDs.

The war was semi-officially about the connection between 9/11 and Iraq. Well, al-Qaeda is in Iraq now, thanks to us.

In these days of Mission Accomplished and troops being killed daily, the war seems to be about stabilizing Iraq. We're the ones who destabilized it.

Next goalpost, please! Good thing they're so movable, if you're a Republican. But what do I know, I'm just a dirty fucking hippie. Wise conservative patriots will doubtless sort this out eventually. They've done so well this far.
Collapse