the_child, age 11, recently expressed her fondest Christmas wish to me.

Sheet music for the piano.

I think back on my greed-riddled dreams of betoyed avarice at that age, and find that I am deeply impressed with her.

Jonathan Strahan on World Fantasy — What he said.

Vintagraph with the world’s best BBQ stand — I want one of these in my neighborhood.

Exploring Old Rome Without Air (or Time) Travel — Google Earth access to Constantine’s Rome. (Thanks to my Dad.)

How rocks evolve — Or how rocks were intelligently designed, if you have a room temperature IQ and an unduly credulous nature. (Thanks to lt260.)

Viewpoint: Bad case of Baghdadophobia — An Iraqi employee of BBC talks about life in Baghdad. I wish every conservative in America would read this, except I don’t suppose they would believe it anyway.

Question of the Day: How much wood would a woodchuck chuck if a woodchuck could operate a Madill model 1800 log loader?

Editorial note: This blog is now open to suggestions for Question of the Day. Prizes may be forthcoming.

Got a letter from American Airlines yesterday. Apparently in the course of my traveling life as an Aadvantage member I’ve flown a million miles with them. (Note these are airline loyalty program miles, which bear roughly the same relationship to statute miles as Internet years bear to sidereal years.) Still, that’s a lot of airplane time.

And it comes with a few interesting perks, including lifetime elite flier status.

There is a very significant difference between Julian days and Julian dates.

That is all. You may shop as usual. No need to return to your homes.

Bar art at the Lamp, a place where I eat fairly often. By Mark, the day barback. Photographed with his permission. 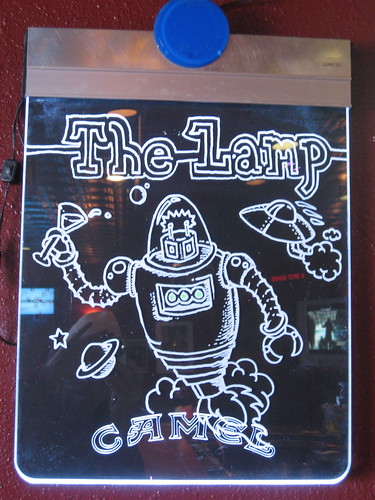 I took a bit of time from the synopsis of Sunspin to photograph some commissioned art just completed by Mother of the Child. It’s very pretty.

It’s the holiday season, and I’m trying to pay for a big present to give to the science fiction world. With the the kind and supportive sponsorship of OSFCI and Springtime Creations, and extremely generous support from davidelevine and frankwu, I am announcing the fundraiser to pay for the Campbell Nominee award pins.

This came about because, as Cheryl Morgan says here, “…nominees for the Hugo Awards, World Fantasy Awards and Nebula Awards have long been given lapel pins to recognize their nominations. No such pin [has] existed for the John W. Campbell Award for Best New Writer.” A year or so ago I decided that creating such a pin would be a terrific way to raise the profile of the Campbell Award, generate additional interest, and celebrate all the past, present and future nominees.

The goal at the time was to develop a design which could be crafted in sufficient numbers that every nominee in the history of the Campbell Award could receive a pin (or pins) to celebrate their achievement. Through 2007 and early 2008, Spring Schoenhuth of Springtime Creations worked to develop a design which would symbolize the historical importance of John W. Campbell himself, the meaning of the award within the field, while also recognizing the five nominees each year.

Spring and I settled on a design of five fountain pen nibs in the form of a star. 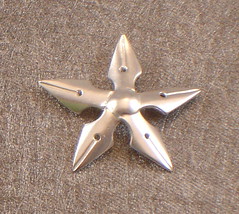 This was to provide a similar visual read with the Hugo, Nebula and World Fantasy Award pins without creating any likely confusion with the other designs and related service marks. WSFS was very kind to review the design to avoid future confusion with the Hugo, while Dr. Stanley Schmidt of Analog, the award sponsor, was also generous in offering his approval.

All of this was ramping up to a fundraiser during the late spring to provide the needed $7,000 budget to mold, cast and finish the 400 pins needed for the past nominees and approximately 10 years of future demand.

Unfortunately, I was diagnosed with cancer, and thoroughly derailed from this effort. Springtime Creations generously proceeded with design and preliminary production so we could deliver the first batch of pins at Denvention, but there is now a substantial financial commitment to meet. Uncharacteristically for me, due to illness I allowed the cart to get very much before the horse here. About $5,500 has yet to be raised to defray the production expenses and allow a mailing budget to deliver the balance of the pins.

I am officially launching the Campbell Fundraiser. This is being sponsored by OSFCI, which is a 501(c)(3) organization, and will provide full tax-qualified documentation of the donation. We’d like to raise the needed $5,500. Any excess to budget will be held against unexpected expenses, then eventually released to the Clayton Memorial Medical fund after the books have been closed on this project.

Please let me know in comments here or via email if you’d like to contribute. I’ll provide donation information (including check “pay to” or other needed funds transfer detail). In additional, everyone who donates will be eligible for an end-of-fund-raiser prize drawing including a selection of my books. If you’re interested in donating to the drawing, that would be fabulous as well.

This Campbell Award pin project is part of my ongoing effort to raise the profile of the John W. Campbell Award for Best New Writer, and help celebrate the newest professionals in our field year after year. I hope you can join me in it.

ETA: PayPal is now available. Contact me at jlake(a)jlake.com for the payment address.