I went walking this morning before dawn. The gibbous waning moon was thoughtful behind a thin veil of clouds. A finger of mist hurried by me, seven feet off the ground and not much larger than a family car, but it was on a mission. I took one of my longer routes, but widdershins in lieu of my usual deosil path, then left the path anyway to follow a side trail along the Springwater Corridor. Hiking in the deep dark on an unknown track is always interesting.

In time, dawn began to steal westward on a wider bed of mist. Salmon streaked the sky a while, before a deep, aching blue which had stolen its cobalt from Hephaestian mine. The fields near my house gave up their moisture as the heavens gave up their dark. I stopped amid scolding crows to look at a herd of Deere, then made my way home again. 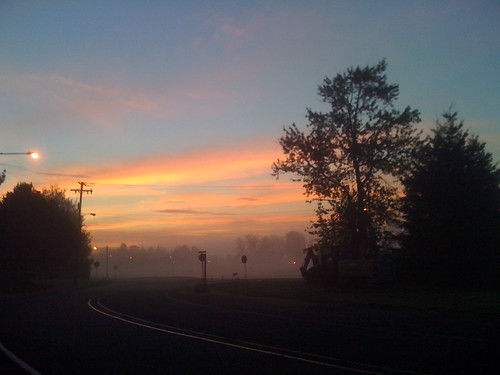 The Campbell Award Pin fundraiser is now underway. [ jlake.com | LiveJournal ] — And yes, I’ll be adding a PayPal link today, thanks to OSFCI.

A Backlash Grows in Bangalore Over Tech Revolution — Interesting take on the costs of globalization.

Blowback is a bitch — More on the politics of Proposition 8 donors. Money shot: You don’t get to heaven above by trampling someone else’s heaven on earth.

After Obama victory, an outbreak of racial anger — Conservative values in action. ‘Cause I’m pretty damned sure it’s not liberals starting dead pools on Obama and burning crosses.

Ted Stevens may face ouster from GOP Senate caucus — “It’s important for Republicans to show that we are going to demand a high standard of ethics,” Denton said. Nice sentiment, but after the years of the Bush administration, the Permanent Majority and the K Street Project, why bother to start now?

Question of the day: What’s the frequency, Kenneth?

the_child has been playing with Club Penguin for a while — an online social environment for pre-teens, basically. She’s wondering about similar sites or games which are age-appropriate for her. Any suggestions?

Sundry remarks by the_child in various contexts over the past few days:

“I wish everybody was rich. Or maybe for world peace. But it wouldn’t be peaceful unless everybody had the same amount.”

“I ate so much popcorn at the movies that I couldn’t feel my lips any more.”

Plus yesterday we had a startlingly insightful discussion about the construction of bridges, materials loading, and the principles of engineering design.

I’m getting up at 0:stupid:30 to head for the airport and vault my way through the morning sky to Omaha. On my return, I will be attending OryCon, beginning with a Sekrit Projekt for jeffsoesbe. Expect continued light blogging with intermittent wit and erudition through next Sunday.