jeffsoesbe is funny in one of my comment threads

What Do the iPhone and Jonathan Franzen Have in Common?

Language Log on translating games — I think I understood less than half this post, but what I did grok was pretty cool. This will bear careful re-reading.

The Edge of the American West on naval tacticis in the Pacific Theatre of WWII — Some interesting stuff there if you write political or military sf/f.

Been a while since I've done one of these updates. Wednesday afternoon (ie, tomorrow),

kenscholes and I depart for San Francisco via car. We will be using the drive time to brainstorm various projects, record a few podcasts, and plot our eventual domination of genre.

Saturday evening in San Francisco, I will be onstage at Writers With Drinks, along with

catrambo and several other folks. Sunday afternoon I will be doing writer-in-the-window at Borderlands Books, exact time TBD, but I should be in the store when they open at noon and writing through much of the afternoon. (I intend to be working on the steampunk astronaut novella, in case you want to pre-plan your heckling.) Then Monday I'm off to Omaha for the week.

January has me as Guest of Honor at Rustycon in the Seattle area. February has me as Toastmaster at Radcon in the tri-cities region of eastern Washington state. I plan to attend Potlatch at the end of that month as well, down in Sunnyvale, CA.

Hope to see some, all or none of you at these various events!

In the department of places you won't see me, I have regretfully been forced to withdraw as writer-in-residence at Rainforest Writers Village, and will not be attending this year. Likewise, I will miss Norwescon this year due to being in China with

the_child over her spring break from school.

A couple of miscellaneous items worthy of note. This morning I weighed in below 220 for the first time in over two decades. Also, the galleys of Green are going out in the mail today back to Tor, with humongous thanks to

It's not even 6 am and I already feel accomplished... In the mean time, Day Jobbery beckons.

Well, this morning I sent off the completed galley edits of Green.

This afternoon, the ARCs arrived: 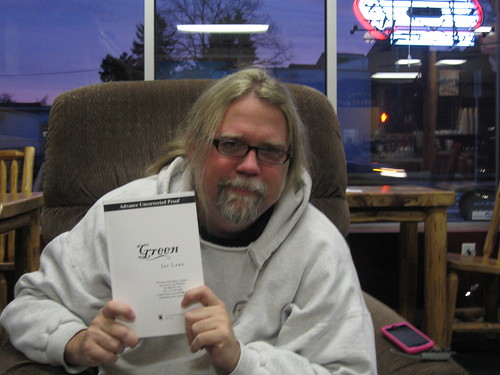 I guess it's a Green day in my world!

ARC contest number two is now open. Tell me in comments why you should win an ARC for your own reading pleasure. Voting poll next week.