Dark Roasted Blend with unusual books — Including old favorites such as the Voynich Manuscript, not to mention Codex seraphinianus; which, if I were made of a lot more money than I am, I'd be buying right this instant.

Semantic sense for the desktop — More ways of thinking about data and querying.

APOD with a photo of solstice at Newgrange — Wow. Just wow.

Fags, Mags and Bags — BBC radio comedy. (Thanks to

The Direct Approach — Obama disintermediating the press? (Thanks to my Dad.)

In Private Memo, RNC Chief Concedes That GOP Is Bereft Of Ideas, Vows Change Of Direction — Huh. A faint note of reality intrudes on the GOPsphere. I'm suspecting alien abduction is playing a role here. Also, I am sure that Mike Duncan will be mau-maued from the Right within a day or two.

?otD: Have you accepted cheese's price into your heart?

I'm not a big fan of taking pictures from the inside of an airplane, this image notwithstanding. But on yesterday's flight from Phoenix to Portland, I saw a couple of amazing things ( Collapse )

Since I've been discussing my journey through health so much this year, I thought I'd mention that I've come back from a ten-day road trip with a net gain of less than a pound. This includes significant social eating in San Francisco, business meals and more social eating in Omaha, travel stress, work stress and the general derangement of life lately. In truth, I'm amazed. I'll end the year down 65+ pounds from January, and down 10 inches in my waist size.

Next year: I plan to grow taller! Time to eat long foods.

kenscholes: "Of course he thinks like you do. You're brothers! Except he doesn't have wavy blonde hair like a girl." 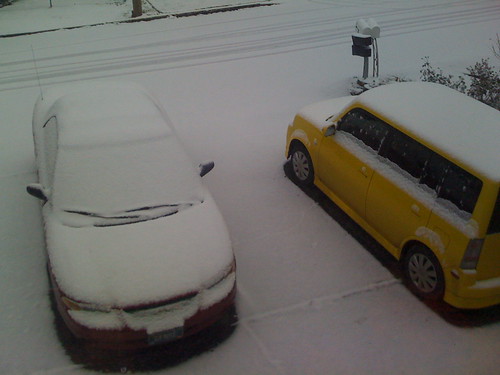 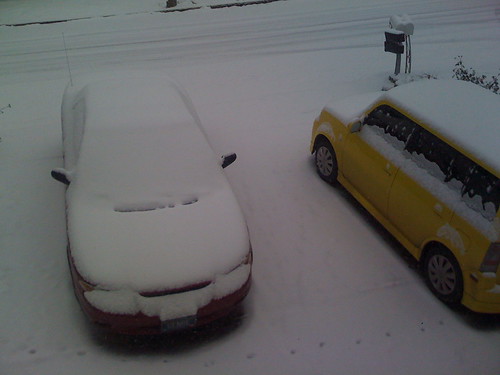 Dinner this afternoon at my parents' place, with

the_child, Mother of the Child,

lillypond, the Niece, and Boyfriend of

the_child and I went over early in the afternoon to make the momos [ jlake.com | Livejournal ]. This involved putting chains on the Genre car, something I have literally never had to do in my life. Luckily my neighbor was out, and very helpful.

A fine cooking was had, all assembled for dinner, and we watched it snow on the empty river in lieu of the cancelled boat parade, which was the original point of getting together tonight. (The folks have a very nice riverfront view from their condo.) Coming back, however... It took about forty minutes to make the less than two mile trip.

Mother of the Child and I were in two cars, because we'd come over separately. We caravanned back. ODOT is requiring chains on all state highways this evening, which includes most of the major through streets around here. In the five hours my car had been parked, it picked up about another four inches of snow. I think maybe eight inches on the ground at this point — which is more snow than everything I've seen in my nine years here put together. No plows, no sand trucks, few people with the right equipment or experience for driving in it.

It was an idiotfest all the way back. I couldn't drive over 20 mph because the chains started banging. (I'd checked them twice earlier, nothing loose, just, well, chains.) Some pedestrians were having a party in the northbound lane of 17th just south of Ochoco. Basically, a roadblock on a dark snowbound stretch of road. Everybody with a 4WD was out to prove they're Mario Andretti, even now. Then Mother of the Child (who was leading me) stopped and picked up a hitchhiker.

the_child wanted me to call her. Which no way was I going to do under these conditions. MotC pulled into a gas station 1/4 mile down the road, so I pulled in. She'd picked up some kid who said he'd been mugged and needed a ride to Clackamas Town Center. (Maybe a mile and half the far side of Nuevo Rancho Lake from where we were at that moment.) No way I'm letting her ride around with some strange dude in the car, so we swapped passengers — she took

the_child, I took this dude.

This guy had had a hard day, that much was obvious, and I think he'd been drinking. I let him use my phone to call his dad, got him over to the mall. MotC followed me over, in case something bad happened. The extra driving was enough for the wipers to crust over so badly that running them only smeared the windshield even worse. By the time I finally got home I had an eight inch triangle of visibility in my windshield. My parents were getting twitchy because we'd never called in safe. And I'm exhausted. Another whiteknuckle night, in the name of Good Samaritanism, but, wow. What a night for it. And Ghu am I tired.

I am going nowhere tomorrow. Maybe not even getting out of bed.