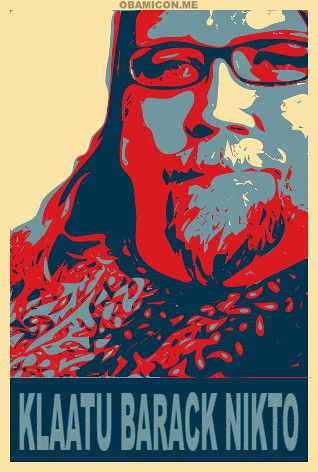 Created at Obamicon.Me. Snurched from The Edge of the American West

A reader reacts to "America, Such as She Is" — I think he liked it. Note my publisher's kind offer to allow me to send an electronic copy of the story to anyone considering their Hugo, Nebula or World Fantasy Award nominations, referenced here [ jlake.com | LiveJournal ].

The Rise and Fall of the Metal Airship — Some cool 'lost technology'. (Thanks to

Largest Moon of 2009 Over the Alps — More APOD awesomeness.

Gap in what we say vs. what we do about racism — This just in, dog bites man. (Thanks to

When the Education Bubble Finally Pops — Some interesting social analysis about the lifetime value of higher education vs. the costs. (Thanks to

Guantanamo agents 'used torture' — The Beeb on how the good guys (that's us) do it. My friends on the Right like to talk about 24 and ticking time bonbs, but mostly we're just hurting people real bad for years at a time.

Report: Schlozman Broke The Law, Then Tried To Hide It From Senate — Those liberals and their silly little ethics. The GOP showed us how it's really done, and the Bush DOJ declined to prosecute. If you're a conservative reading this, tell me, was Scholzman's conduct ok with you? If so, would it have been just as ok for a Democrat to do this?

The Way Back — In a rare moment of aberration, a Republican shows some sense. Too bad for the future of this country that Representative Davis didn't have some of these ideas when he was in office.

?otD: Hey Bungalow Bill, what did you kill?

1/14/2009
Body movement: 40 minute ride on the stationary bike
This morning's weigh-in: 222.4
Currently reading: The Confidence-Man: His Masquerade by Herman Melville

For months now I've been feeding my post-operative vitamin C addiction with a lot of lemonade and limeade. Recently I finally decided to try making my own. [ jlake.com | LiveJournal ]

This is most definitely dandy, but it puts a lot of refined sugar into my diet. If you deconstruct the basic recipe made the way I like to make it (tart and strong), a cup of lemonade is 7 parts water to 3 parts lemon juice to 2 parts refined sugar, or just under a quarter cup of refined sugar. And that's with a lot less simple syrup than most recipes call for.

So I've been considering alternatives to the basic simple syrup. My friend Andrea at Food Fascination suggested using Splenda baking mix, which is 50% sucralose and 50% refined sugar. I decided to try that, as well as dark brown sugar, just for the heck of it.

This episode of "As The Sugar Boils" has been brought to you by the Nuevo Rancho Lake Kitchen of Science.

In my continuing effort to remove myself from being dependent on LiveJournal's increasing issues, I've moved this contest poll over to my WordPress site. Let's try the voting here instead. Usual rules apply, all decisions of the judges are arbitrary and capricious, ties to be settled by