At what age were you first published? [ jlake.com | LiveJournal ] — Already some good responses there.

Nine Lives: 1910 — Shorpy with a bit of airship history. Read the comments.

Why do killer asteroids fascinate us? — Because we are a culture of twelve-year-old boys?

thirdworld, from whom I snurched this via Twitter: The subway systems of the world, presented on the same scale. Kind of vascular systems for civilization.

The Russian government rewrites history. Again. — (Thanks to

?otD: Do rainy days and automatic weapons get you down?

Presented without comment (for now), anent the age of first publication poll [ jlake.com | LiveJournal ]. 56 respondents in this snapshot of the data. 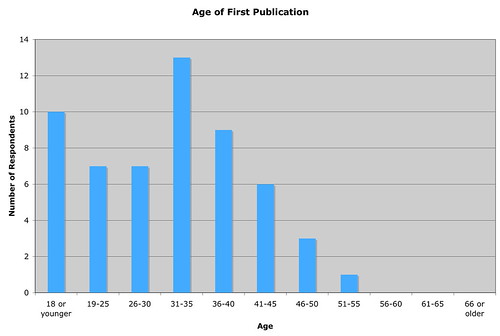 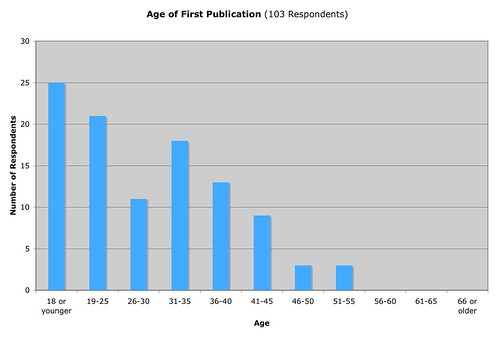 With 103 respondents, the curve stays fairly similar to its earlier version [ jlake.com | LiveJournal ]. There is certainly a polling artefact in place due my imprecision in crafting the question — judging from comments, some people cited their first appearance in a school paper etc., others cited their first professional publication.

At the same time, I suspect even with a much better crafted survey instrument we'd see a similar, if perhaps less dramatic curve. I'll generalize thusly: some people come to writing with enough raw talent to begin publishing early, and then grow into their craft. Those are the writers who started young. Some people (myself included) have to serve their decade+ of apprenticeship and write their million+ bad words, which explains the 31-35 bump.

There's no defensible methodology here, it's an amateur Internet survey with a self-selected response pool, but I still find this most interesting. Per a suggestion from

ruthannereid, I'll mount a poll in a few days on time-to-first-publication, measuring from the first serious effort. (In my case, 11 years; see above.)

Your thoughts? Other ways to look at this?

Tourbillon has acquired an official production title of Pinion. That makes the three book arc:

And so we rock on.

I have finally knuckled under and joined a health club. I am interested in a wider variety in my exercise routine, and in developing some strength training, especially in my abdominal core which is still weaker than it was before the cancer surgery. Happily, the gym I've joined has a trainer willing to work at 4:30 am, so tomorrow instead of walking or hitting the exercise bike, I'll be driving 5 minutes to the gym for my first session with a personal trainer.

This will be interesting.

Six more chapters revised on Pinion, f/k/a Tourbillon. If I had a bit more energy, I might close to the end of the line read tonight, but it will have to wait until tomorrow.

Once I get this done, it's back in for the heavy work. The big news today, of course, was the adoption of the publication title, Pinion.