Return of the caption contest. Now with pandas! [ jlake.com | LiveJournal ]

Me, on the Google Books settlement and your legislators: [ jlake.com | LiveJournal ]

Brewing with Synthetic Biology — Science! Plus I love the fact that "synthetic biologist" is a job title.

Reclaiming America's soul — Paul Krugman on torture. Having spent years as a liberal being told I was immoral, unethical and Godless, I'd sure like to see some moral and ethical accountability for the conservatives who made this mess. God will know His own, I guess.

tongodeon with more on Tea Parties — Not that conservatives make much sense to start with (intellectual consistency being pretty much a disqualification for aconservative), but the more you look at the nuts and bolts, the nuttier they seem.

Thought police muscle up in Britain — Liberal-progressives get as creepy as conservatives. (Thanks to

?otD: Which way to the egress?

4/25/2009
Body movement: hiking this morning!
This morning's weigh-in: n/a (forgot to weigh in)
Currently reading: The Confidence-Man: His Masquerade by Herman Melville; The Selected Works of T.S. Spivet by Reif Larsen

tillyjane and I change our mind and hike the Leif Ericsson Trail instead. In any case, photos later. Y'all play nice while I'm gone.

I'm going to start posting short photo series of the various places we visited in China. This may take a while, so perhaps it will just be a regular blog feature. Today's photos are from April 9th and our visit to Tiananmen Square, immediately prior to our entering the Forbidden City.

tillyjane and I set out to hike Dog Mountain, on the Washington side of the Columbia Gorge. The wildflowers are just starting to come in over there, and we hoped to see some nature.

Unfortunately, what we mostly saw was chilly overcast and winds of 30-40 mph howling through the trees. We walked about 90 minutes up, but the steep trail and lousy conditions were discouraging, so we turned back without summiting. Still, it was a great walk with some lovely scenery. 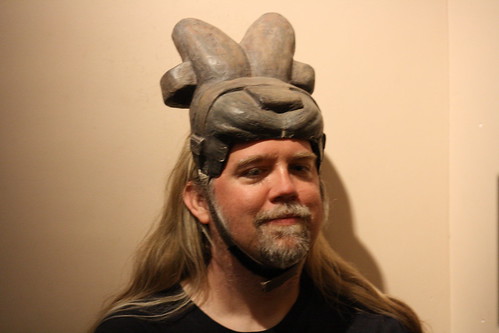