Somehow during all the chaos of yesterday [ jlake.com | LiveJournal ] I found the mental focus to work on Pinion for about an hour and half. Amazingly, I'm still on (or actually, head of) schedule, though i did not start the restitching as hope for.

This week's Publisher's Weekly reviews — Including both Green [ Powell's | Amazon

camille_alexa's Push of the Sky.

Renewed Challenge to the Dinosaur Killer — Centauri Dreams on the K-T extinction event.

'Swine flu' name won't be changed in Israel — Umm. I'm all for cultural relativism, but, um. (Thanks to

Its not that wingnuts are ignorant; its that they know so much that isnt so — The Edge of the American West on rampant historical illiteracy among conservatives. (Rep. Bachmann blaming Carter for the last outbreak of swine flu, when it happened during the Ford administration, for a trivial example.) I've long observed that in order to be a conservative in America today you have to cling tenaciously to some blatant counterfactuals. That's a very bad intellectual habit to get into. Once you've learned to ignore reality in favor of your "gut", it gets easier to keep making shit up and calling your crap "true facts."

?otD: If this is Thursday, this must be Nebraska, right?

calendula_witch gets her first cover mention! Her story "Eastlick" is in the current issue of Black Static, retrieved from the PO box this morning.

A nice way to restart things after yesterday's mess. 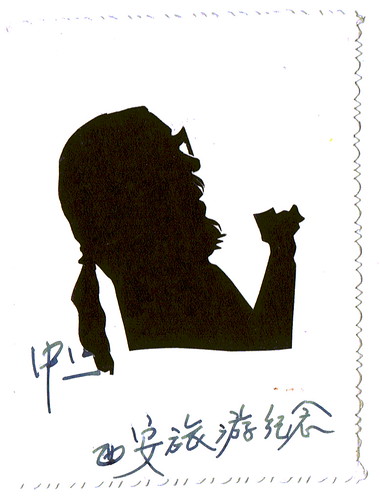 ETA: @hanov3r on Twitter provides the following translation of the Chinese text: "Souvenir for visiting Xi'An"

ETA2: Via tweetbrain.com, @fangchin suggests: "Souvenir for visiting Xi'An" is too literally translated. I would do "For a fond memory of your Xi'An trip".

On my way to Omaha at the beginning of the week, I finished reading The Selected Works of T. S. Spivet, by Reif Larsen (Penguin, May, 2009) [ Powell's | Amazon

This is sort of a mashup of Griffin & Sabine and The Lovely Bones. The book relies heavily on marginalia, illustrations and assorted extratextual material to advance the story. They are lovely, very well-executed, and a real pleasure to play around with.

Likewise the point of view character T.S. Spivet, a boy of (almost) 12 who is spectacularly unreliable as a narrator. He's got dreadful OCD, is driven by horrible guilt over a family tragedy which even he himself cannot acknowledge, and has an IQ off the Richter scale combined with an emotional naivete which is heart-breaking. A sort of uber-Mary Sue for f/sf fans, at the least. He's compulsively readable in a sort of train-wreck way, and many of T.S.'s (or Larsen's) insights are jaw dropping.

The narrative unfolds with an eerie, origami beauty. Bad things get worse, illustrations grow more arcane and complex, life happens to this poor kid. There are hints of the fantastic near the beginning, mere whiffs; then the book gets considerable more bizarre in the last chapters, sliding right off the rails of even the notional naturalisticism with which it began into some full blown fantasy. Which it then utterly fails to pay off.

This is why the book reminded me so much of The Lovely Bones. There's an editorial seam near the end of that book, readily visible to a reader with much experience in fantasy protocols, where the ending promised in both the title and much of the early foreshadowing vanishes in favor of a very popularized, Hollywood ending. I can hear the editorial board saying, "It's a great book, but cut that fantasy crap out and give us a real ending people can understand." (Which, given the underlying premise of The Lovely Bones, seems bizarre.)

Likewise with The Selected Works of T. S. Spivet. I don't know if Larsen wrote it with a more fantastic ending and had his mind changed for him editorially, or if he just swerved back to the middle of the road and chickened out on the promise of the book. The ending is emotionally satisfying, but essentially trivial and abandons much of the arc of the story to achieve its resolution.

I still say this one's worth the read, especially for confirmed bibliophiles — it's one of the most compelling books-as-artifacts to come across my desk since the first edition of City of Saints and Madmen — as well as for anyone who enjoys deeply interior narrative from the unreliable perspective. Rather like reading Little, Big, the joy of this book is the journey, because the destination is almost tragically disappointing. But what a journey this is. And what a book it could have been.