Genesis by R. Crumb — Now this is pretty damned interesting.

Get Fuzzy nails the conservative mindset — A view into neoconland for those of us in the reality-based community.

Something To Consider — Ta-Nehisi Coates on Sotomayor and why he is not a conservative.

?otD: Hump day? What the heck is hump day?

Yesterday was the release date for my latest novel, Green [ Powell's | Amazon

]. Had a lot of fun with the virtual release party online. You guys are terrific!

K— and I went by Powell's on Burnside so I could sign stock. 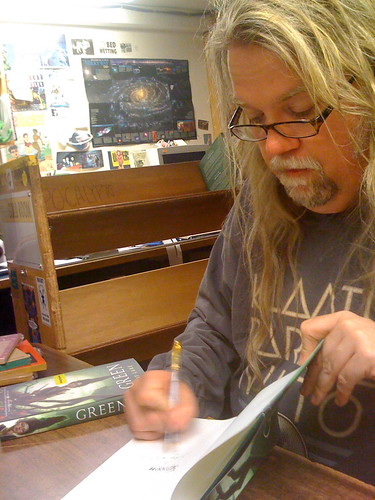 Me signing in the sekrit room in the back 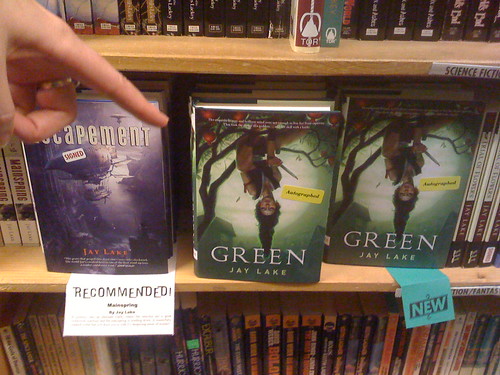 I also signed stock at the Burnside store. And Friday night at 7 pm, I'll be at the Powell's Cedar Hills store to do a reading. Dinner to precede at the Cedar Hill's McMenamin's from 5 to 6:30 if you're in the neighborhood, but do come to the reading if you can.

Some new Green links below, including a hilarious and insightful review from io9.com and an excerpt running at Tor.com.

io9 with a review of Green — My favorite review of my work, ever, I think. Hee.

Green cover art as free wallpaper from Tor.com — Released yesterday, with what I think was exquisite timing.

An excerpt from Green at Tor.com

The Success Trap — I am guest-blogging at Tor.com all month to celebrate the release of Green.

Apropos of none of the rest of the events in my life, I had a bizarre dream the other night which I've meant to recount.

I dreamt that the Charlotte, NC airport authority had bought out my employer, and we were all employees of the airport. I had to go there to meet with the HR director, who (for some reason) was Illinois Senator Roland Burris. He told me I would need to take a 50% pay cut and begin working as a courier for the airport authority.

I'm still giggling over this several days later, but, really, anxiety much?

Yesterday's consult did not go well. Further consideration of the scans divulged some new information (well, new to me at any rate). I've got the two masses on the liver, a suspected lung tumor, and we're back to assuming full lymphatic involvement. The lung information was new to me.

I have an oncologist appointment Friday to discuss assessments and treatment paths, and I'm still waiting for the second opinion response from UCSF. Next step is (likely) liver surgery either in early July or early August — the timing is under discussion based on further diagnostics of the lung site and the lymph sites. That surgery will be comparable to my surgery of last year, with me fully out of commission for two weeks or so, and on reduced duty for a while after.

Four to six weeks after liver surgery, otherwise commencing directly sometime this summer, I'll embark on a six month chemo course. (ie, Even if the surgery doesn't happen, the chemo will.) The details of this will become clearer after Friday's appointment. Midway through the chemo course, I'll have renewed medical imaging to check the progress of the tumors. Plans may change based on those outcomes.

This is not fully confirmed, as there has been no tissue diagnosis yet. There's a slim chance that some (or even all) of this is mistaken. For example, the spot on my lung may be an old pneumonia scar. However, given my personal history and that fact that we know the liver masses are novel, as they did not appear on last year's scan, everything has to be assumed high risk unless proven otherwise.

What this boils down to is that the cancer is migrating through my lymph system and metastasizing where it will. This was probably true last year, but it wasn't detectable on last year's scans.

Statistically, given our current understanding, optimistically I'm in the 30%/5-year survival rate group. That's statistical, not based on my personal health, etc., though it's still very real. As my doctor said, "You're either 0% or 100%. No one is 30% dead." I am likely a much better risk than that, but that's the bucket I'm in. I'm (relatively) young, I'm not particularly multifactorial, I'm highly motivated with excellent emotional and social support structures.

But still, you'd have much better odds at the craps table in Vegas than you would betting me to show up at WorldCon in 2014. (Hmm, maybe I should start making book. Would it be tacky to run my own dead pool?)

Once we know a little more about treatment paths, I'll start changing my convention and writing plans as needed. I'm not going to let this get me, and if it does, it will have to drag me kicking and screaming all the way.

kenscholes and my entire circle of family and friends are treating me magnificently. Like I said, if love could cure cancer, I'd be the healthiest son of a bitch in North America.

For a while, I'm going to spend some time being the sickest son of a bitch in North America. But first, I write. I'm going to start drafting Endurance this weekend. If I can't wrap the draft before surgery or the onset of chemo (whichever comes first), I'll finish the book once I've stabilized sufficiently on the chemo to work again.

Because I am a writer. A dad. A lover. A friend. But most of all I am alive.

And we all know statistics are damned lies anyway.