The Book of Dreams ToC announced — In which I am found in excellent company.

Shirts for writers — (Thanks to

Amazon goes Orwellian — Oh, the cheap, cheap irony. Just in case you missed it... (Thanks to

corwynofamber, my dad, and others.)

Verbing up in the trademark business — Language Log on trademarks and usage.

Light Repels Light — The repulsive side of an optical force could lead to ultra-fast telecommunications. Mmm, physics.

?otD: Do rainy days and Mondays always get you down?

I am in San Francisco this week for some more medical appointments in connection with my cancer. Since I'm finding it logistically impossible to schedule time with people, I thought I'd throw one of my group dinners.

calendula_witch and I will be at Kezar Bar & Grill, at the corner of Cole and Carl in Cole Valley. Exact address:

This is just off the N-Judah street car line, among other things.

This is an open dinner. That means if you're reading this, you're welcome to come, whether we're old friends, nodding acquaintances or total strangers. If you think you'll be there, please let us know. That way we can warn the restaurant. 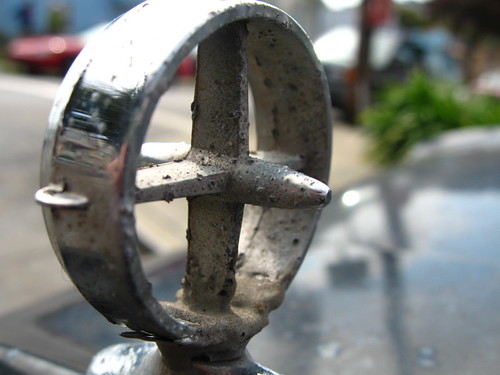 Photographed by me in San Francisco.

Leaving work early this afternoon to have another round of CT scans done. Expected result is to calibrate growth of lesions in liver and lymph. (Other results are possible but not likely.) Additional possible result is to uncover extent of potential lesions in lungs. (We're looking based on some evidence from prior scans, don't really know.) I've been dealing with my fears about this mostly by staying a few hundred yards ahead of their snapping teeth. Today, I feel the bite, though I won't get the scan results until Wednesday.

Today's adventures in cancer included a CT scan here at UCSF in San Francisco. That went in the usual manner, until it didn't.

calendula_witch and I arrived early, and they took me in early. The IV was put in my left arm for the contrast dye, then I sat around for a while. They took me into the little room with the big white donut and set me up on the scanning bed.

At that point a long, confusing conversation occurred about precisely what my scanning orders were. As I explained to the tech, they were doing me "neck to nuts", with a quad-phase scan of my liver. Several phone calls later, they announced that the radiologist wanted to handle it differently, and was that ok with me? Like, what am I supposed to say?

When the contrast dye went into my IV, ( Collapse )

I controlled myself, on all counts, but it was very strange.

As usual, the CT scan itself took about three minutes. We got me dressed and de-needled, then

calendula_witch and I went across the street to the film library, where we retrieved the scan data for me to take back to OHSU, my hospital in Oregon. The scan disc they gave me is marked "Abd & Pelvis", says nothing about a chest scan. I am not, shall we say, infused with the cheery glow of confidence.

On the other hand, if I have to go back in, I get another site-specific hot flash...

PS, I'll get the scan results on Wednesday.

I can now officially and happily announce that Tor Books is buying Endurance and a third Green book, tentatively entitled Kalimpura. These are currently slated for 2011 and 2012 releases. So keep an eye on that girl, she's going to go far.

In order to while away the months of chemotherapy, and in recognition of the success of our joint short fiction career thus far,

calendula_witch and I have embarked on a new collaborative novel project.

Our Lady of the Islands is set in a tropical version of Venice, in the same universe as Green, though with no plot crossover. We're trying a different model for the protagonist — a middle-aged woman dealing with the adulthood of her children, the challenges of her business, and of course, a confluence of politics, religion and social turmoil in her city.

We brainstormed the plot and outline, which I then developed in some detail.

calendula_witch is currently writing the first draft. She'll have it to me late this fall. Chemo permitting, and working around my Endurance production schedule, I'll revise her draft, then we'll go into final production cycle before getting it out to

Given that we've sold to Clarkesworld, Fantasy and Interzone together, we've proven we can write together. It will be fun to see how that blend of romantic and creative energy that constantly sparks between us will play out at book length. Watch her blog for updates, WIPs and other news about the book as it develops.