I am on all three of the bestseller lists at Borderlands Books this month — Green in hardback, Escapement in mass market paperback, and Footprints in trade paperback.

The Winds of Dune launches today — Check out the tour schedule.

Scrivener's Error has a boatload of fascinating stuff today on publishing (and other topics) — Easier to send you there than to relink three or four from here.

Terry Pratchett campaigns for the right to take his own life

APOD with a triple sunrise — Looks a lot like a certain Star Wars shot to me.

Rep. Eric Cantor (#2 in the House GOP) blames "birtherism" on liberals — And conservatives wonder why the reality-based community thinks they're crazy. Birtherism is even stupider than Creationism or moon landing denialism, and is spreading like wildfire among white conservatives, if the polling is to be believed. And speaking of crazy, here's a bit more on conspiracy theories, specifically moon landing denialism, snurched from Bad Astronomy Blog. The chart is great, but be sure to read the exegesis below.

Corpses as artifacts of a cowboy culture — The Edge of the American West on murder and violence in America. Including a great quote from Richard Hofstadter, ca. 1970. one is impressed that most American violenceand this also illuminates its relationship to state powerhas been initiated with a "conservative" bias. He was contrasting that with the leftist violence of that era, but if you look since, most American violence continues to be conservative, from clinic bombings to Timothy McVeigh. Even al-Qaeda are staunch conservatives, in the sense that they stand for much the same thing the Republican base does — absolutism in religious law, belief in the corruption of the American government, elimination of secular education, etc. If bin Laden were Christian, like conservative bomber and multiple murderer Eric Rudolph, he'd likely be a folk hero to a significant segment of American conservatives. [Note: this was edited at the prompting of

lordofallfools, who quite rightly pegged me for tarring with too-broad a brush. See comments below to follow that discussion.]

calendula_witch has a very good post from a few days ago, concerning practice. Go read it.

Her post is an example of synchronicity, because a few days later, The Boston Globe published this article on grit that talks about much the same thing.

Both of which in turn remind me of my own theory of "psychotic persistence" [ jlake.com | LiveJournal ]. (I mentioned this connection recently in Link Salad.)

No matter how you cut it, this writing game is all about doing it, and doing it more. That's why all the writing advice I have ever given boils down to "write more". In my case, I write more by watching tv not at all, DVDs/videos very little, movies rarely, gaming never, etc. etc. etc. I've taken a lot of things I enjoy out of my life in order to do something I enjoy even more — writing, and having written. It's a sacrifice I've made, and joyfully so. (In case you missed it,

scalzi has a different take on those choices here, btw.)

And I don't think anyone can accuse me of being a dry stick. I have a lot of fun, and I basically do what I want in life. But I got to this point by years and years of grit, practice and psychotic persistence. 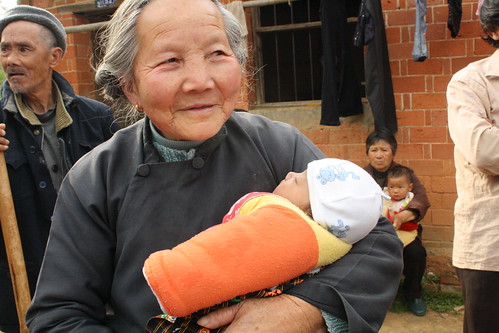 Photographed by me, in China.