autopope on Jon C. Wright and the mimetics of authoritarianism — His closing line is a killer.

Non Sequitur on plotting — Funny as hell, though I actually think Wiley gets it wrong.

The not-so-true story of the MV Augusta 60cc Cafe Monomoto Superleggera — Motorcycle humor, in the form of alt.hist. Well, secret history, at least. (Snurched from the Twitter feed of danjite.)

Israeli wins Fatah top body seat — A Jewish-born Israeli has been elected to the governing body of Palestinian President Mahmoud Abbas's Fatah party. Presented without comment, simply because I find this item quite curious.

Creationists believe the darndest things! — Apparently, the existence of the Loch Ness monster is proof that evolution is a lie. Hahahahahahahahahaha. It's tempting to say these people are too stupid to tie their shoes, but the sad part is that like most conservatives, Creationists are intelligent, moral people trying to do right in the world, who happen to be invested soul-deep in profound counterfactuals.

National Healthcare: a breeding ground for terrorism? — More conservative idiocy on public healthcare. This stuff is right over the edge.

OECD Health Data 2009: Statistics and Indicators for 30 Countries — If you're going to compare American healthcare to other countries, you might as well try some data on for size.

In America, Crazy Is a Preexisting Condition — Birthers, Town Hall Hecklers and the Return of Right-Wing Rage. This one hits all my confirmation biases.

?otD: How many flew over the cuckoo's nest? 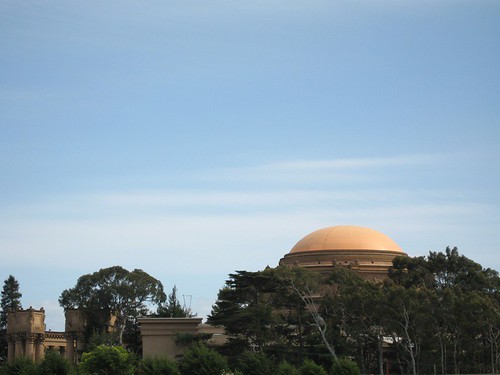 The Palace of Fine Arts, photographed by me in San Francisco, CA.

If you have a photo which might make a good moment-of-zen post, let me know. I'm happy to run material by other people, if it strikes my fancy. Leave a link in comments.

I've been thinking a lot about the current healthcare brangle here in the U.S. You can't really call it a "debate", since there's precious little rationality emitting from the conservative end of the spectrum. That in and of itself is very revealing — if this were a clash of principles, or a clash of competing solutions, we wouldn't be seeing town hall shoutdowns, bizarre distortions such as the "death panel" meme, and flat out idiocy such as the Investor's Business Daily editorial sanctimoniously informing us that Stephen Hawking wouldn't have survived under the British National Health System.

These are not the tactics of a faction with a coherent viewpoint, let alone a leg stand on. Conservatives appear to favor the current system, where 40 million people are not covered at all and most of the rest of us are one lay-off notice away from risk of medical bankruptcy, over any possible attempt at change. Otherwise they'd be engaged in the process, either collaboratively or competitively.

The system is broken. Badly. Without good insurance, I'd be bankrupt or dead right now, thanks to my ongoing cancer adventures. I am one layoff notice away from that fate. And I'm one of the lucky ones.

But conservatives would rather shoot down any chance of liberal-progressive success that admit the current system is broken, let alone attempt to fix it.

I'll go back to what I've said about conservatism before. As a movement, and through its political standard bearer, the Republican party, conservatism has failed on its own terms. These are people who say, in their party platform, that they believe in:

An optimistic patriotism, driven by a passion for freedom. Devotion to the inherent dignity and rights of every person. Faith in the virtues of self-reliance, civic commitment, and concern for one another. Distrust of governments interference in peoples lives. Dedication to a rule of law that both protects and preserves liberty.

This devotion to freedom, dignity and rights expresses itself as a howling drive for forced pregnancy, government control of consensual private behavior, destruction of educational quality in the name of religious dogma, wholesale abrogation of constitutional rights, domestic spying, perpetual imprisonment, and deficit spending practices that would shame a 1970s era Congressional Democrat. To name a few.

Conservatives can't even get their own narrative straight, how can they respond to a competing narrative?

Through lies and hysteria. Hence the current healthcare brangle. The most bizarre manifestation of which is the so called "death panels." Considering that it's a time-honored conservative impulse to deny benefits and privileges to people who cannot afford them on their own, assigning to liberal-progressives this putative desire to "put granny down" is the worst form of projection. I suppose a lot of conservatives believe that liberal-progressives will shunt old people aside, simply because they recognize their own willingness to shunt children, the poor, and immigrants aside, and can't imagine that liberal-progressives might rise above that tendency. Given the long-standing conservative disgust at liberal "giveaways", it's a very strange charge indeed. Not to mention counterfactual.

As I said this morning on Twitter, Conservatism is the morbid fear that someone, somewhere, is enjoying an undeserved privilege at your expense.

Except healthcare isn't an undeserved privilege. Not in a society of our means. I think conservatives should fight for lower taxes and smaller government and individual liberties. (We'll ignore the Bush Administration for the sake of that.) That fight benefits us all, or can do so. But fighting to keep people sick and dying without recourse? That's not a passion for freedom, and that's not devotion to the inherent dignity and rights of every person. That's just a sickness born of fear.

Live up to your own words, people.

This will only make sense if you've read Green, but this morning

calendula_witch and I were discussing a current collaborative short fiction project set in that world. Chat transcript slightly edited for clarity:

calendula_witch: it's never entirely clear how one becomes a Blade aspirant, and I'm not sure it matters

jaylake: although how one becomes an aspirant might be an interesting story in its own

calendula_witch: right, but it's not relevant here

jaylake: short answer: by being a real pain in the ass as a very small child