A word on the wall — A truly great cartoon for us linguaphiles.

chriswjohnson with a time lapse movie of the Perseid shower

The Public Health Nurse answers humanity's call — Zorro the nurse? Quite an image.

US banknotes show cocaine traces — The largest study of banknotes has found that 95% of dollar bills in Washington DC bear traces of the illegal drug cocaine.

The Swiss Menace — Paul Krugman on healthcare reform, and the various options as practiced in other Western societies.

Precisely the disappointment we were prepared to feel — The Edge of the American West with a take on Obama's healthcare reform goals which surprised me.

Believers Invest in the Gospel of Getting Rich — Sigh. And some of you wonder why so many of us are atheists.

?otD: Excuse me, why did I kiss this guy? 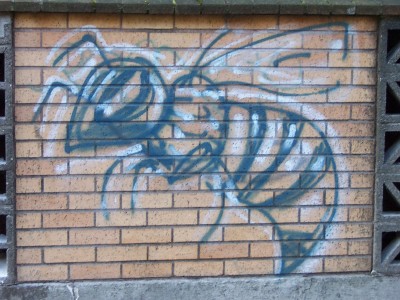 This post is a follow up to a post I made some months ago, talking about my personal history and life experiences. The first installment can be read here. [ jlake.com | LiveJournal ]

Another installment about my biography, written informally and occasionally here on my blog. I had a fairly unusual childhood, and questions about it come up often enough in interviews and conversations that I'd like to discuss it. I'm not going to focus on the objective details, so much as my own sense of my experiences, and how they might have led to where I am today.

I'll add to this series on an irregular basis as the spirit moves me. Feel free to ask questions, or treat this as a meme and discuss your own recollections.

O mighty blogospheric brain, Dad and I are bedeviling ourselves with a question not easily disgorged from teh Google.

Why, in the United States (and possibly Western culture in general) does agriculture very strongly favor chicken eggs over duck eggs? Are ducks less productive or less hardy? Historical accident? Other factors?

A lot going on just now. As

calendula_witch mentioned, we have sold collaborative novelette "The Passion of Mother Vajpai" to Subterranean Press for their upcoming anthology, Tales of Dark Fantasy 2. This is in the Green continuity, backstory for an important secondary character in all three books.

We've got collaborative short story "From the Countries of Her Dreams" out to first readers, which is also in the Green continuity, concerning a very minor character from Endurance, though the action takes place shortly after the end of Endurance, roughly contemporaneous with the third book, Kalimpura.

I sold a piece of Twitter fiction today, which can be read here if you're in the mood for a four second ride.

Of more news, I signed contracts for Endurance and Kalimpura today, and mailed them back to la agente's New York offices as instructed.

And finally, I began horsing my way through the coped edited manuscript (CEM) of Pinion (third Mainspring book) today.

calendula_witch proceeds rapidly apace with Our Lady of the Islands, and we've got another project cooking along. And we're off to Seattle this weekend for the Grants Pass reading and signing.

Busy much? All this and a bag of chips!