Which came first, the chicken or the duck? [ jlake.com | LiveJournal ] — Some fairly entertaining and informative comments on eggs over there, especially on the LJ side.

squirrel_monkey on female friends — Thought provoking, to say the least.

Scrivener's Error is on a roll with his link sausages today — Litterachoor and healthcare, both.

Integrations Under Fire — The Edge of the American West on the history of racial and gender integration in the military. The parallels to Don't Ask, Don't Tell are painfully obvious, much as the parallels between interracial marriage and gay marriage are. Bigotry is bigotry, however much it's guised in a principled religious or political stance.

Texas public schools required to teach Bible this year — Ah, my ancestral home, leading the charge back to the Dark Ages. Why does anyone of faith think government mandates are a good idea? Their beliefs are only a demographic shift away from marginalization without the protections that secularism gives to religion. (Thanks to

Lying about healthcare — GOP Representative Roy Blunt lies about Canadian and UK healthcare, is indifferent to facts. Just like GOP Senator Charles Grassley's "pull the plug on grandma" crack, which was widely reported, and which he now (much more quietly) admits he knew was false at the time. They lie to the headlines to advance their agenda, and experience no negative consequences for it, as the media does little fact checking and no followup. To my conservative friends: is this how you want your principles advanced?

Where are the limits? — Talking Points Memo on bringing guns to political events, especially presidential events.

?otD: Why was the egg a gentleman? 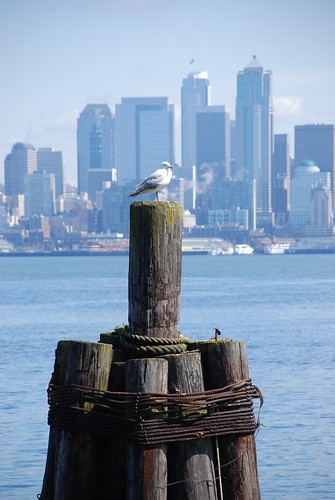 Yesterday in the car, on the way to her grandmother's place to swim with her cousin,

the_child announced apropos of nothing in particular that she'd recently discovered the power of making eye contact. (And yes, she used that phrase.)

I allowed as how eye contact was a powerful tool, and even many adults couldn't manage it well. She explained that when she did that, people paid attention to her. Also, that the boys in her class would look away after a minute, and most of the girls wouldn't hold eye contact at all.

We talked about how eye contact was way of establishing, or refuting, social control of a situation, as well as asserting independence and respect. How it could be a threat — when eye contact became staring, and what that meant. About the evolutionary aspects of dominance behavior (I introduced her to that phrase). Why it was important to be noticed if you were a pedestrian or a biker, and an automobile was nearby. Why sometimes in traffic other drivers would refuse to meet my eye, because then they could pretend not to see me to let me into a difficult merge, for example; in other words, more dominance behavior.

It was a wonderful teachable moment. She was terrifically insightful and thoughtful, and quite thrilled with her new social tool. I asked her who had showed her this, but she told me she'd figured it out for herself.

The whole conversation surprised the hell out of me.

calendula_witch and me at a reading and book signing party on Saturday, August 22, from 2 to 4 pm for the Grants Pass anthology! We both have stories in this fine volume, which is a clever and dark postapocalyptic anthology with a very cool premise. Authors scheduled are: Jennifer Brozek, Jay Lake, Seanan McGuire, Shannon Page and James M. Sullivan.

Dinner to follow at 4:30 pm at Canyons in the Redmond Center - walking distance from Soulfoods. Booths across from the table for spill overs.

Come and hang out!