Too Much Coffee Man writes a book — (Thanks to

jimvanpelt on his novel progress, with a digression into Lake units — Ah, eponymity.

The death of print? — James Gurney on Smithsonian's push for digital subscriptions.

Heroes from a future that never was — (Via Dark Roasted Blend.)

Hatsune Miku Virtual Idol Performs 'Live' Before 25,000 — Max Headroom, anyone? (Thanks to

Japanese Game Show MRI — And cross-dressing nurses! Um, yeah. (Thanks, I think, to

Haunted by Stalin's Ghost — How Russia views its past. (Snurched from Scrivener's Error.) 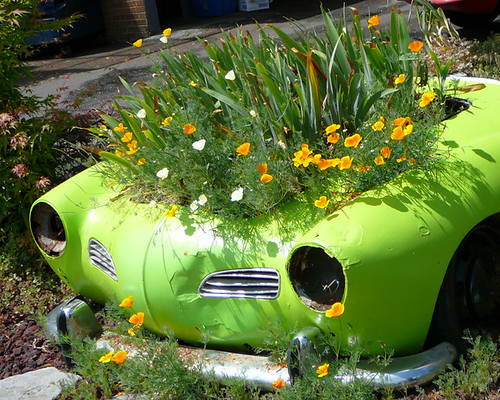 Photographed in Portland, OR by Roadstars.

Walked this morning here in Omaha. The fireflies are gone, and I never heard the distinctive, echoing peep of the nighthawks, but I did see the usual rabbits, along with an amiable skunk, as well as finally spotting the owl that patrols the stretch of Papillion Creek where I walk. She was sitting atop a power pole, visible only as a shape in the glow from some distant street lights. Still, I've been hearing her for months — sometimes I think she paces me — and it was nice to say hello.

Brad R. Torgersen rightly points out that I've been getting positively ranty about politics lately. I've still got a lot to say, this healthcare reform debate has really touched some nerves for me — both personally as a cancer survivor who has to cope with pre-existing condition limitations and the likely financial ruin when I reach my lifetime maximum coverage limits; and as a liberal-progressive with strong convictions about the obligations of a wealthy society such as ours to its members regardless of their financial or social status. To say the least, I find currently articulated conservative viewpoints on these issues notably lacking in facts, common sense or compassion. But I think I'll lay off it for a while. At least a few days. I'm a writer who blogs about politics, not a political blogger. Thanks for the reminder, Brad.

On the writing front, I continue to bang out stories, but I'm about to shift gears to a book-length Sekrit Projekt in collaboration with a Sekrit Collaborator. It's cool, I don't know yet if it will pay off as this is a new direction for me, but we'll see. Thinking about that led me to think about my writing plans over the next few years. Spent some time last night discussing this with

elusivem, to the point where they were laughing at me about the degree to which I was looking into the future. For example, the Tor contract I just signed has deliverables due in the spring of 2011, and the final edition in the contract won't be out til the spring of 2013. That's a four year cycle.

Roughly speaking, here's what I think is going to happen:

All of that, of course, interspersed with copy edits, galleys, short fiction, commissioned work, possible novel projects that someone might throw money at me to do quickly, etc. In other words, very much subject to change without notice, most likely through date slippage. Of the above, only Endurance and Kalimpura are contracted, so everything else can flex as opportunity and inspiration permit.

Watch this space for more details.

A quick update about a non-cancer health issue I'm having. I appear to have damaged my left rotator cuff back in May. After several months of screwing around while my arm grew progressively worse, I am commencing physical therapy next week on my return to Portland. In the mean time, I've reached a point where my left arm aches all the time, and I can be completely debilitated with pain for five to ten minutes simply by grabbing something moderately heavy with my left hand. This has also translated to intermittent pain in my left wrist and hand, and some minor pain in my right wrist and hand as I indulge in poorly-considered compensating behaviors.

You can imagine what the prospect of pain in my hands does to me.

Second order effects of all this include excessive sleeping, due to both the pain and the rather alarming amount of Ibuprofen I am now taking under doctor's orders. Excessive sleep makes me logey and cuts into my exercise time (though I did fine this morning), which, when combined with the irregular food habits of travel, means I'm putting on weight beyond my normal baseline range.

All in all, this is not made of win.

It's also perfectly solvable. I just need to be more diligent about exercise and eating, and, more to the point, stay ahead of the shoulder problems. But grr. Frankly, this is more of a pain in the neck on a day-to-day basis than the cancer has been.

Updates as conditions warrant. In the mean time, carry on.

I received an email recently from a reader saying, in part:

I recently was browsing Amazon for new books when I saw your title Green after reading the blurb I quickly added it to my wish list to down load later. I am dismayed however to find that the digital version is priced well over the $9.99 most publishers price digital books at. I just thought you should know that almost all Kindle users honor the $9.99 boycott of digital books. With no publishing costs I am not sure how some publishers price digital versions but I suspect that the digital market is not fully understood by "dead tree publishers." They also may be testing the waters to determine what the consumer will pay. Green looked like a wonderful book but with the user tag "9 99 boycott" most kindle users will just skip it by.

I'd never heard of the $9.99 boycott, but then I'm not a Kindle user. (Though I do read books on the Kindle app on my iPhone.) Here's what I sent in response:

Unfortunately, like most authors I have absolutely no control over pricing, on Amazon or in the print channels. The $9.99 boycott may send a message to my publisher, but the people it hurts most is authors like me. This damage is done both directly by depressing the sales of the book (ie, reducing potential royalties), and indirectly by making the publisher less likely to buy future books from me as a result of the depressed sales.

While I very much appreciate -- and agree with -- your perspective, I do hope you and the other boycotters realize your largest impact is on the authors themselves, who have no control whatsoever over the situation. The boycott will mostly reinforce the presence of discounted bestsellers, and further marginalize newer voices. I certainly hope that as a book lover, that's not your goal, but it's definitely your outcome.

The law of unintended consequences comes to get us all, one way or another.

I can unpack this in a number of directions, and probably will in a future post, but for now I'm interested in your thoughts on this. What do you think of the $9.99 boycott? Do you see a relationship between the price of books and an author's income, and how much do you think it matters? What else does this suggest to you?