Speaking of Green and the Kindle, last night's post on the Amazon boycott has spawned very interesting comment threads on both sides of my blog: [ jlake.com | LiveJournal ]

Getting My Hands Dirty — John Klima on how Electric Velocipede gets made.

The Trash Project — Industrial dance. (Thanks to

Finding out What Colors Dinosaurs Were — Wow. Not quite as impressive as the headline suggests, but still, wow.

The GOP's Top Chef Starves a Beast and Poisons a Debate — Some snarky takedown of the GOP "contribution" to the healthcare reform process, courtesy of The Washington Post.

The late Senator Kennedy in his own words

?otD: What color is the sky in your world? 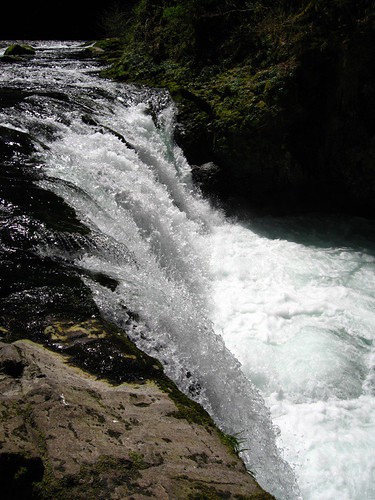 Photographed by me along the Eagle Creek Trail in the Columbia Gorge, Oregon.

If you haven't caught it yet, check out the growing discussion on Kindle, ebooks and pricing here: [ jlake.com | LiveJournal ]

I want to address a few points which have emerged in the comments threads on both sides of my blog.

Royalties: Authors make different amounts of money depending on the edition of the book sold. Our royalty percentages are different for each format: paperback, hardback, Kindle (or other ebook) and audio. The exact numbers vary per contract, and are often subject to intense negotiation. But it's not a simple "$1 per book" or whatever. (In fact, it can be even more complicated than this, as ebooks are sometimes treated as subsidiary rights, but the point remains the same.) [edited for clarity]

Digital rights: One commentor noted that digital rights are supposedly easy for the author to retain, and therefore authors should self-publish on Kindle. My experience in negotiating trade publishing contracts is quite the opposite. Publishers, for a variety of good reasons, are intensely interested in retaining digital rights. As an author, this is fine with me — by definition Tor is much better positioned than I am to package and market a book, be it Kindle or print or other format. That's why they're the publisher and I'm the author.

What is owed to authors: I didn't mean to imply that the boycotter who originally wrote me, or anyone else, owes me anything. Having a publishing contract is not an entitlement, something I try pretty hard to keep in mind. What I did mean to imply is that like any (sane) author, I'd prefer my books to rise or fall on their own merits rather than be compromised by externalities. The sad truth is that all books are compromised by externalities. For example, due to the timing of the book's release, the Escapement mass market paperback got caught up in the Andersen News failure, which resulted in an orphaning of part of my print run, and a resultant weakness in the book's P&L numbers. That's life in the big city, and part of why so many of us authors have day jobs. But what I did want to point out to the boycotter was that they were creating a negative externality which would have far more effect on the author than it would on the intended targets of the boycott, which is to say, either Amazon or the publisher.

Pricing of books on Kindle: Several commentors said that Amazon sets the Kindle pricing. I don't think this is quite accurate. Per the Kindle terms of service, Amazon sets the Kindle sales price, but that is a net retail price discounted (or maybe not, depending) based on the "Suggested Retail Price" which is set by the publisher. For example, if the publisher were to set the SRP at $9.99, then by definition Amazon would not price the book higher. I'm not suggesting this should be the case, merely pointing out that the question isn't that simple. From the Kindle TOS:

4. Pricing and Program Terms. As part of your Application, you will provide us with a suggested retail price for each Title (Suggested Retail Price or SRP). The Suggested Retail Price you provide to Amazon must be consistent with the SRP you have provided to other retailers and wholesalers. However, we have sole and complete discretion to set the retail price to our customers for Digital Books.