The Flash Fiction Open is going swimmingly [ jlake.com | LiveJournal ] — Go read the entries. They're quite good. Submit your own!

the_child and I go play with space rocks [ jlake.com | LiveJournal ]

Robert N. Lee disagrees with my stance on the Google Books settlement issue

Art writing guru James Gurney on research: Part 1, Part 2, and Part 3 — I can think of less than a handful of writers who would go this deep. Amazing.

John Taylor and the Corpus Clock — Chronophage. Huh. Fascinating video. (Thanks to

The Five Biggest Lies in the Health Care Debate — Newsweek documents the source and spread of some of the most persistent GOP lies about healthcare. Since conservatives can't win this one on ideas or on principles, all they have left is lies. Unfortunately for America, they're damned good at lies.

DeMint: Health Care Is a Privilege, Not a Right — Compassionate conservatism, from a Republican party near you.

McCain Admits Bush Torture Violated Treaties — Includes some fascinating references to Reagan's stance on torture, as well as the Bush DOJ quoted as saying in a court filing: "[Torture] undermines respect for and trust in authority, government and a rule of law. The gravity of the offense of torture is beyond dispute." Why didn't you speak up on this earlier, Senator McCain? Like, oh, when it would have mattered? Remember kids, as the GOP liked to remind us constantly during the Clinton years, character counts.

?otD: How many parts was Gaul divided into? * 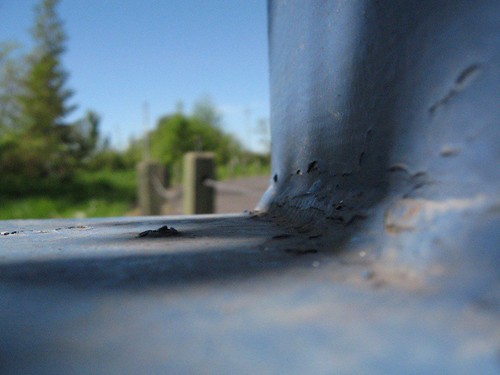 Water fountain at Oak's Bottom in Portland, Oregon, photographed by me.

The chief symptom of my current shoulder problems is debilitating pain when I thoughtlessly reach past my currently limited range of motion, or grasp weight in certain ways. Unplugging a power cord with my left hand can send me to the couch in tears for several minutes, unable to move or think. This is why I was at the physical therapist yesterday.

So this morning, I was icing my left shoulder as instructed. On finishing the icing effort, I went to remove the ice bag from my shoulder, and it slipped away from my grip, where I immediately grabbed for it with my left hand.

Oh, irony, thy bite is cruel yet unloving.