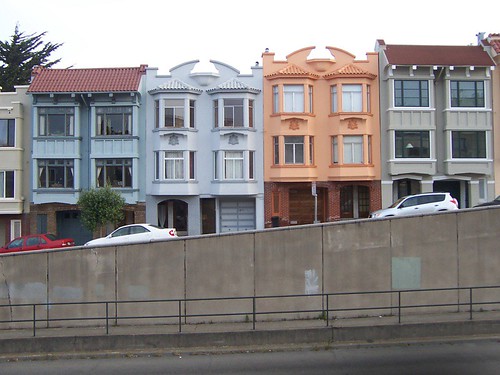 Taken by me in San Francisco.

Sci Fi Wire with your guide to punks — In which I make an appearance. (Via

Nordenfelt class Turkish submarine — For those of you fans of Escapement and Pinion, real life Victorian era submarines, and some odd history. (Via

Roundhouse: 1943 — Because I can't resist a good dose of Shorpy train pr0n. And neither can you!

How to Create Quantum Superpositions of Living Things — Well, sort of. Still cool as hell. What could possibly go wrong?

willyumtx sent this video link to the world's scariest hike —

I guess I'm a conservative, too — Ta-Nehisi Coates on Obama, conservatism and the recent school speech furor.

Hank Williams, Jr., political sachem — "If it wasn't for the Electoral College, Obama wouldn't be president," he said. "Let's face it. That's the problem right there." Um, no. Wrong president. Wonder what he thought about the election of George W. Bush?

Newt Gingrich, on NPR criticizing the healthcare bills as complex legislation — Because the minute you start putting together a 1,300-page bill, you have no idea what the different sections are like, how they interact with each other. And, in order to get enough votes, you end up buying people in for bizarre reasons and giving away goodies, and all of a sudden you have a political monstrosity. Gee, how did he feel about the 342 page USA PATRIOT Act, passed in two days through both the House and Senate?

Massachusetts Democrats trying to change the law back to allow Governor Patrick to name a replacement for the late Senator Kennedy — You guys are full of shit. Changing the rules when it suits you then changing them back when it suits you again is precisely the kind of opportunistic bullshit the other team does all the time. (Take a gander at the way Senate procedures regarding the role of the minority party changed as the GOP came in and out of power this past decade if you don't know what I'm talking about.) How the hell can anyone be accountable in politics if no one plays a cleaner game? Confidential to Massachusetts Dems: You're hypocrites. Get over yourselves. After all, what would you be saying right now if the GOP were pulling precisely this stunt?

?otD: Did you turn the tap dance into your parade?

...thanks to WordPress suddenly deciding my posts have a character limit, this link fell out of the main link salad:

Never mind. Something weirder and more subtle is going on. Will troubleshoot.

Yesterday I posted on being Jay Lake [ jlake.com | LiveJournal ]. In comments, the question of time and productivity came up. I'm notorious for being a fast writer, though I've been slowing down a lot, but I also put a lot of time into my writing, fast or not.

The most important thing I ever did was quit watching television. Back in 1994, I turned the set off. I haven't had a cable bill in 15 years, don't own an antenna. I do watch a couple of DVDs per month, but that's about it. Because television used to eat my life. I've never missed it, not really. Only ever caught two shows on DVD since then, Firefly and Battlestar Galactica, both when I was recovering from surgery last year.

If you watch television an hour a day, and don't have time to write, then turn off the tv. Almost anyone can write 500 words in an hour. That's 182,500 words a year — two short novels or a hell of a lot of short stories.

Likewise gaming. I never did play console games much, and shut off my last computer game in 2001 when my writing career started gaining traction. Haven't missed it, either.

If writing is important enough to you, you will find the time. And I would always rather be actively writing than passively consuming packaged entertainment.

As usual, your mileage may vary.

Recent posts have prompted various discussions of time management, personal commitment, energy levels and whatnot. I jokingly said to

calendula_witch that I should post about how I spend my time, both in a macro sense and on a daily basis. She thought that was a great idea. (And see her latest post on the topic here, as well as

manmela's post here.) So, if you've ever really wanted to know how a pro writer spends his time...

Longtime readers (as of, oh, last week), will recall the insanely good simple chicken marinade recipe [ jlake.com | LiveJournal ]. I made it again tonight, testing for a more serious run at an upcoming writing retreat where I am camp cook.

— Limeade makes it more awesome, but slightly less sweet, so suit to taste
— 1 cup of marinade per pound of chicken is more than enough
— Don't drain it so thoroughly, as cooking the chicken in more of the marinade enhances the flavor
— Even drained more carefully, I still used two pans, so that was a wash (get it? huh?)
— This stuff would make a passable kung pao if I threw some peanuts and celery in and slathered on a little plum sauce
— This stuff still makes awesome quesadillas

I think we have a winner.

For now, at least. I fear the rewrite. At any rate, "Torquing Vacuum" came in at 5,800 words in first draft.