Something weird this way comes — Rick Klaw with a piece on the New Weird, in which I am briefly mentioned.

A reader reacts to The New Weird — Including comments on my Dark Towns story, "The Lizard of Ooze."

The new issue of Locus has a very interesting and thoughtful Paul Witcover review of my recent novel, Madness of Flowers — Review isn't on the site, unfortunately. Must see the dead tree edition.

Interzone 226 is out, with my story "Human Error"

Beware of Science Fiction — Christian fundamentalist views of our field. My favorite: Heinlein was a nudist and practiced "polyandry." Um... (Via @pyr_books.)

A Bad Attitude — Cancer blogger Amy on the perils of positive thinking. And Freakonomics on the ROI of cancer spending. Now here's a touchy subject.

Jonah Goldberg reveals George Lucas is either prescient or has a time machine — Criticizing the political messaging of Avatar, the prominent conservative said, "There are dozens of movies that have taken shots at Bush, starting with 'Star Wars' movies." Star Wars: 1977. George W. Bush: 2001. Ahem. (Note:

ericjamesstone objected seriously to my characterization of this on Twitter yesterday, when I edited the Goldberg quote for length.)

?otD: Why me? There must be a thousand other guys. 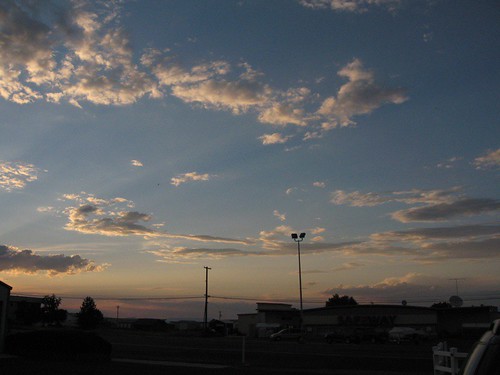 This morning in Link Salad, I posted a link to a piece on the Freakonomics blog on the ROI of cancer spending. It's a serious question, and such cost-benefit analysis, along with risk-reward analysis, is a critical element of social policy. As

ericjamesstone has quite rightly said to me in a slightly different context, you don't make law (or policy) based on individual cases.

But in my individual case, this cost-benefit analysis directly impacts my short- and long-term mortality risks.

Without digging into the details (though I do have all the paperwork filed here), my Excellent Cancer Adventures of 2008 cost about $100,000 all told. I paid about $6,000 of this, the rest of the cost was borne by my insurance carrier. Most of this was surgery and hospitalization costs, along with some fairly spendy tests and a bunch of psychotherapy.

My New Adventures in Cancer, commencing in May of 2009, cost about $50,000 in that year. The spending pattern was similar to 2008's, mostly surgery and hospitalization, with tests and head shrinkage. i don't have the tally yet, but I believe I've paid about $5,000 out of pocket this past year.

Chemotherapy, primarily due to drug costs, will run about $180,000, I believe. Throw in another $20,000 for a couple of CT scans and whatnot along the way, and by the midyear mark, another $200,000 will have been spent on me. About $6,000 or more of that will be out of my pocket. (And no, I don't make that much money. Cancer is expensive, even with good insurance.)

Tally it up, and by next July we will see a total of $350,000 having been spent keeping me alive over a two-year span, with $17,000 of that coming out of my pocket. The balance of $333,000 is borne by the insurance carrier, and thus somewhat less directly by my employer, their investors, and society in general. All of which is, incidentally, considerably more than has been expended on me in my entire life put together prior to the onset of cancer.

What is my life worth to you?

For example, if you're a conservative who believes the current healthcare finance system is "the best there is", and that the current healthcare reform effort will ruin American medicine, then you believe that the $1,000,000 lifetime limit my insurance carrier places on my benefits is appropriate. At my current burn rate, in three or four more years I'll run out of benefits, and you believe it's ok for me to crawl off and die.

Obviously it's not that clear cut. For one thing, the hoped-for, and reasonably expected, result of chemo is that future treatments will not be necessary. This is not a given. For another, if I were out from under the insurance umbrella due to lifetime limits or unemployment, there are programs for the uninsured. But my standard of care would drop precipitously, and I would literally be bankrupted by the personal financial responsibilities.

the_child would have a much poorer childhood, and a much more difficult time getting a college education and a strong start in life, for example. And even then, society is still paying most of my bills, just via different mechanisms than a private insurance carrier.

Obviously, the benefit to me personally of continued life and health is incalculably high. But I'm only bearing about 5% of the costs. And I'm damned lucky I'm well-paid enough to even manage that much. What is the cost worth to you? To society at large? Because there's a wall at the other end of this tunnel, not a light, and someday soon I'll smash into it at the speed of mortality if I'm only a little bit unlucky.

What would your politics be in my position? What would you think of the conservative opposition to reform if you were me? There are some problems the free market will never solve, and I'm living in the heart of one of them.

shelly_rae has been taking good care of me. I'm scared spitless, but I'm going to live. Literally and figuratively.

So we have made a ritual to help me get through chemo.

calendula_witch and I dreamed this up from an idea she had, and it was extended and refined by others, with contributions of material support from Mother of the Child and 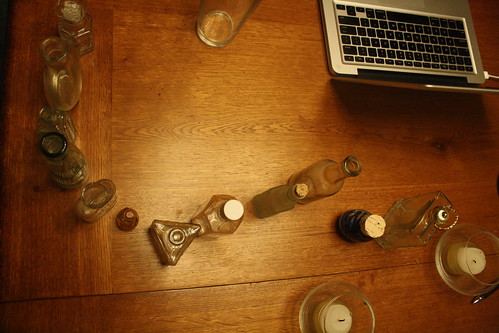 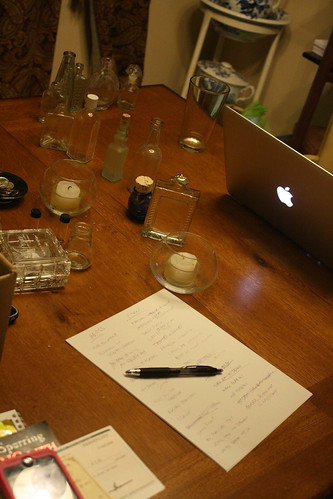 shelly_rae created twenty four small slips of paper, then wrote out each of my hopes and fears on one of the slips. (They also each wrote a separate, bonus hope of their own, which I did not see.) 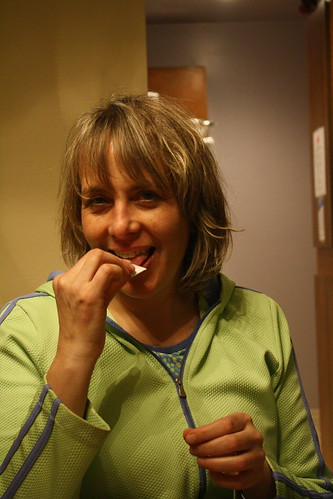 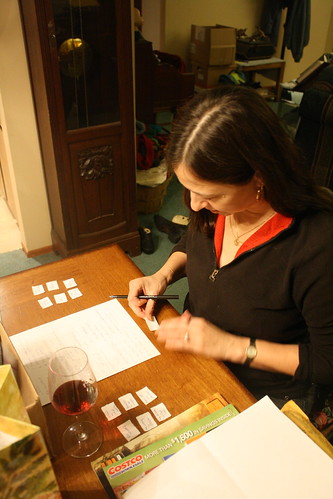 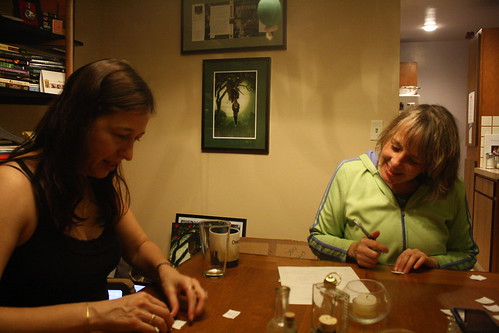 We randomly inserted one hope and one fear in each bottle. Then the two of them placed their bonus hopes into the bottles, and we arranged them on my mantelpiece. 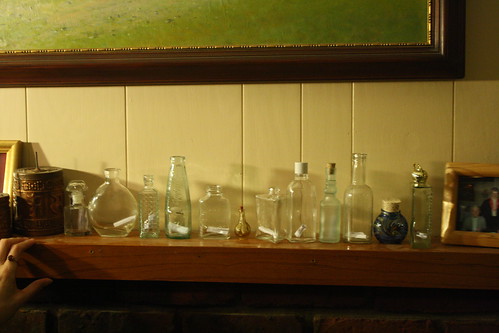 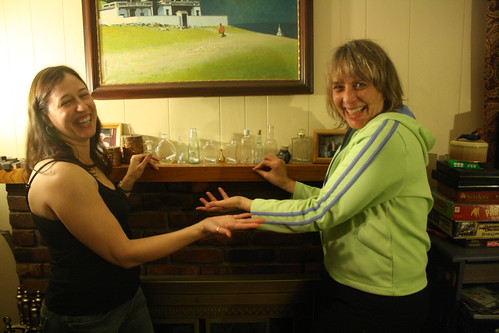 Now, every time I finish a chemo infusion (which will be the Sunday afternoons after the Friday sessions, when I can remove the pump I'm to wear for 48 hours), I will smash one of the bottles, releasing both the hope and the fear within. We'll save the shards and scraps inside a larger bottle to remind me later. The diminishing line of bottles on the mantelpiece will be my countdown calendar showing how long I have to go until I'm done.

I'm not normally much for rituals, but this one feels powerful to me.

shelly_rae are marvelous to do this, and I love them both.