Jay Lake Receives John W Dalmas Award — This brought tears to my eyes when I received the email this morning. RadCon is one of my 'home' conventions, and I have been attending for many years, often serving as Toastmaster and chief troublemaker. Unfortunately I won't be there to accept the Dalmas Award this year due to my chemotherapy for metastatic colon cancer, but Shannon Page, my life partner, will be accepting for me.

martyn44 with the most snarkalicious review evar of Avatar yet

How to Photograph the Earth — Photos from near space for less than $150. I believe I posted something else about this before, but I'd love to do this, maybe this summer when I'm over chemo. I think the Pacific Northwest sf/f writer and fan community needs a space program.

Calvin and Hobbes on tails — And perhaps the last word on neckties. Furries take note.

90 Percent Of Languages Will Be Extinct Next Century - And That's Good — Hmm...

Top Ten Anti-Christian Attacks in 2009 — An interesting view from the Christian right. I read this as a combination of paranoia, and resentment at having their own rights to commit hate speech curbed. This is a nation which heavily privileges Christian belief and Christian speech. (Very simple example: How many avowed atheists hold elective political office? How many avowed Christians do?) To pretend otherwise is disingenous fearmongering.

?otD: How much is that dogie in the window? 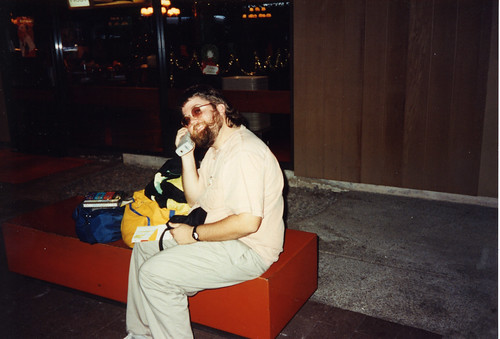 This work by J.A.K. Lake is licensed under a Creative Commons Attribution-Noncommercial-Share Alike 3.0 United States License.

Several folks have asked about the spoons metaphor.

This comes from "spoon theory", promoted by the lupus and MS and other communities of people with "hidden disabilities". Basically, the idea is when you're sick that way (or in my case, in post-op recovery followed by chemo), you can still do anything you want. You just can't do everything you want. People in full health start their day with a very large supply of spoons, the spoons representing increments of energy or attention or focus, and spend them as they go through their days. People in limited health have fewer spoons. Simple things like taking a shower can take a lot out of a person, for example. So you wind up asking yourself questions like, "do I have enough energy to take a shower and to do a load of laundry?" Because you have enough spoons to do either but not both.

Chemotherapy definitely places me in spoon deficit. I don't look like I have cancer. My face isn't drawn, I don't move in pain, I am my usual ruddy color. It's easy to look at me and wonder why I'm walking so slowly, for example. But the spoons are still missing.

So my friends and loved ones have conspired to shower me with spoons. 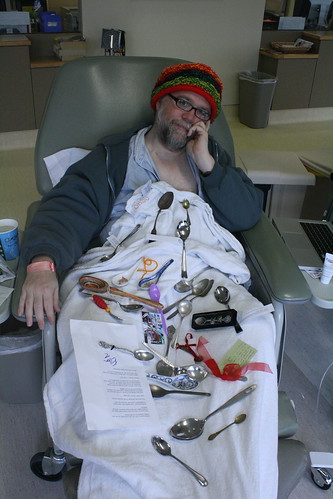 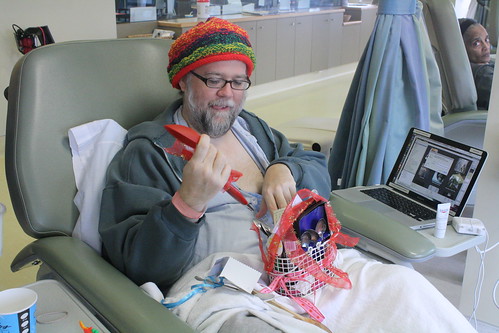 That way I have extras, to move me through the hard times ahead.

Several folks have also asked how to send me spoons themselves. (Or cards, or knitted hats, or unmarked $100 bills, or whatever.) I guard my daily privacy in terms of my home address and so on, but I'm happy to receive packages and mail at my PO Box. So, herewith:

And once again, thank you all. Later I'll see if I can pull together a more complete assessment of the spoon gifting, and proper gratitude by name.

Yesterday was day one of session one of my chemotherapy. I blogged and tweeted as the process went on, so I won't bother to repeat the blow-by-blows, but herewith is ( Collapse )

Well, last night was slow and difficult. As I believe I reported earlier, about three hours into the infusion session I became rather fog headed. That persisted until the later afternoon, after we'd been home a while. Still, I managed to eat a light, delicious meal and generally be conversational, without moving around much.

We all dropped off to sleep pretty early. I elected to sleep propped up in the easy chair, figuring that if I took to the bed I'd risk rolling over and screwing up the lines on the infusion pump. Despite some misgivings, I took a Lorazepam to help me sleep and combat any incipient nausea.

I slept nine hours, which is very unusual for me. I assume it's a combination of infusion fatigue and Lorazepam, and figure on something similar tonight. Been rather chipper this morning, much to my surprise. Side effects, at least here in session one, have been muted so far, though I know they are cumulative.

Basically, I am experiencing extreme fatigue and lassitude. Even getting out of the chair is difficult. As a result, I plan to go walking with

shelly_rae gets back from taking

the_child to the OMSI and lunch. Because, you know, exercise combats fatigue. I don't expect to make my baseline three mile walk, but we'll see.

I also had a pretty sharp headache last night. Today it's still present, but much more dull. The chemobrain continues today in my slowness at processing written information. I'm conversationally pretty sharp, but it took me all morning to make my two basic morning blog posts. Clearly I'm not firing on all cylinders. I've decided not to work on Our Lady of The Islands today, given the difficulties I'm experiencing.

In other departments, no nausea whatsoever. A bit of queasiness here and there, but not associated with food intake or smells. I am experiencing constipation, which will be significant by tonight, but I'm addressing it with my array of increasingly powerful laxative solutions ranging from "come on out, boy" to "weapons grade". Also happy to report some sexual function this morning, which amazed all concerned. Even though we are now functioning under "Toxic Avenger" rules, which are annoying, to say the least.

Anyway, going to see what the day brings, and assume much the same for tomorrow, until the pump unhooks in the afternoon. Peace and health to you all.

Even after ten years here, there's several things I can't find in Portland that I'd really like. I'm looking for recommendations from other Oregonians (or visitors) about where to find the following:

Fried Pickles. This would be battered, Southern fried pickles. I prefer dill chips, but spears are okay. Big Daddy's used to serve them, before the place folded. I used to eat them at Threadgill's in Austin.

Midwestern Pork Sandwiches. The White Horse used to serve these, but it folded years ago. I get them several places in Omaha, but I haven't found anywhere else in Portland to enjoy battered pork goodness on a burger prep bun.

Tonight, the lovely and talented

shelly_rae helped me make art out of a mixture of misery, love and spoons. ( Collapse )
Collapse