Mainspring garners a rather nice review

Hindenburg letterhead — From Letterheady, a rather curious blog. (Via Drawn!.)

The Garden Army? — An interesting and vaguely disturbing WWI US home front poster.

Brit Hume and the right to stupid speech — More on alleged discrimination against Christians in public discourse. (Which is discrimination, I suppose, if one defines any divergence from one's own views as discriminatory. Too bad, Brit. White male Christians really are not an oppressed class.) 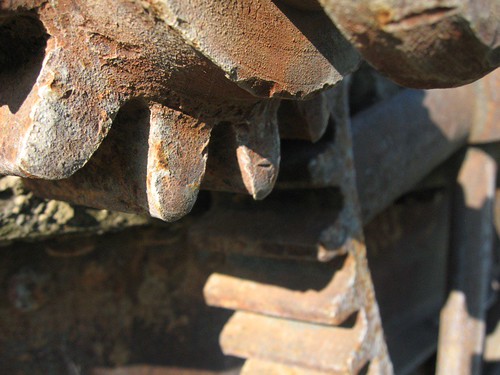 daveraines expressed some dismay that I recently raised the "pink unicorn" argument, which he characterized as trivial. Likewise,

cathshaffer made a lengthy, thoughtful comment about how she struggles with that, and from her view how the "pink unicorn" argument undermines the discourse.

As is usually the case, this sparked a lot of thought in me, but for now, I want to confine myself to the pink unicorn question. I am reluctantly concluding that I do not find it trivial, and in fact it might be critical. I am also concluding that leads to some errors of thought on my part, or at least, a failure of imagination on my part.

First, why I think the "pink unicorn" argument is nontrivial. Let me attempt this with a parable of sorts, so as to minimize the poking of sticks in eyes.

Let's say I'm a Flat Earther. For the sake of discussion, assume this is a sincerely held spiritual conviction of mine, backed by many years of study of Flat Earth scripture, examination of the millennia old traditions of Flat Earthism, regular participation in Friday night Flat Earth Society Meetings, careful consideration of my premises and actions, observation of the natural world, and my own instincts about my body and soul.

As a Flat Earther, I'm very concerned with how international air travel is routed. Surely it cannot be safe for people to fly from California to Japan. They may fall off the edge of the world. Pilots are clever, and fly around the corners, but this is still dangerous. I fear for their bodies, and as a committed Flat Earther, I fear for their souls should the air crews and passengers perish on the journey.

Because I have tens of millions of fellow Americans who (roughly) share my beliefs, and the strong support of a major political party, I decide to seek a seat on the board of the Federal Aviation Administration. This is a critical issue. Flat Earth denialism risks not only the lives and safety of the people who don't understand the issue, but all the innocents who are taken in by them. I want to make sure that air traffic safety standards, navigation practices and pilot training reflect this truth in which I sincerely believe.

Can you imagine giving a Flat Earther a role in setting international air travel standards and practices? The "pink unicorn" of Flat Earthism is rooted in a counterfactual so blatant that it's dangerous.

Fair enough. We'll keep the Flat Earthers off the FAA board. As

daveraines says, we live in a democracy, and everybody's voice counts. But this Flat Earther that I am will also have opinions about trade policy. If I don't believe ships can sail from Shanghai to Long Beach, what am I going to say about balance of trade with China? If I believe the Earth is flat and bounded, what am I going to say about teaching plate tectonics in 9th grade Introduction to Physical Science classes?

My "pink unicorn" provides a foundational assumption that flaws all my thinking. How do you, as a rational member of the same democracy, negotiate with me about anything, or convince me of anything different from what I already believe based on my sincerely held, traditionally rich faith?

Now take the "pink unicorn" one step closer to reality and away from ridicule. Say I belong to a recently-founded religion that sincerely believes ancient alien souls infest our bloodstream. I believe that all of our mental issues and most of our physical issues are a result of these aliens, and proper detection and elimination of these alien remnants is the key to health, happiness and power. Do you want me sitting on the grants boards of the National Institutes of Health, ensuring that medical funding goes to those projects most likely to deal with the threat of these alien presences? Do you want my sincere religious beliefs driving your medical standards of care and legally permissible medical procedures?

"Pink unicorns" inflect thinking from first premises upwards. They're critical to the discussion of religion in politics. They're privileged, in a way that, for example, my personal errors of thought (which are certainly legion) are not privileged. When I'm wrong about something, I don't have the passion of faith, the support of a congregation, the endorsement of society, the threat of moral error or even mortal damnation to reinforce my wrong thinking. It's between me, my conscience, and my logic.

And when one stands outside the black box of any given faith structure — Flat Earthism, Scientology, Christianity — they're all equally pink unicorns. From the point of view of trying to work out social and cultural issues in an objective, secular context, all pink unicorns distort dialog in ways which are privileged, unassailable, and wrong.

Later I'll come back to why this argument creates errors of thought and failures of imagination on my part. For now, I am out of time and energy.