ETA: Eventually my chemo-addled brain realized I could turn everything in the house off, in case something on the local network was creating a packet storm that borked out the WAPs. Wii, four networked printers and five networked computers later, I have Internet back. Will not bother to run down suspect device right now to identify root cause, but I believe it's one of the two oldest printers.

Severe network issues here at Nuevo Rancho Lake. Both primary and backup WAPs are declining connections. I am normally pretty good at the voodoo dance of network troubleshooting, having been a sysadmin at several points in my career, but not with my brain being fried by 2.3 ml of 5FU being delivered by pump every hour. I have neither the mental acuity nor the physical energy to do all the requite component isolation, power cycling, and possible help desk calling to either Cisco or Comcast.

If any Portland peeps with mad networking skillz have time to come over today and do the network dance, I would be profoundly grateful.

Until this is resolved, expect very light blogging from me,

shelly_rae, who arrives in a few hours.

Grr. Of all days to have to deal with this...

Empires of Africa — Cheryl Morgan with some commentary and pointers to fascinating African history.

Eclipses in the shade — APOD with a really nifty eclipse photo.

Defending the Planet: NRC Final Report — Some interesting and deep neepery about Near Earth Objects from Centauri Dreams. Deep Impact, anyone?

Did a thirst for beer spark civilization? — Interesting. (Via Scrivener's Error.)

Photographers protest over UK terror search laws — Professional and amateur photographers have gathered in London's Trafalgar Square to protest against terror stop and searches. The photographers say police are intimidating people with cameras in tactics to target possible terrorists.

2009 Ends Warmest Decade on Record — Ah, more of those liberally biased facts, this time from NASA, that well-known hotbed of Islamic socialism.

Bad Science on accountability in animal research — As well as the sometimes odious methods of opponents.

No More Jesus Rifles — A rollback of the Christianist nonsense about Bible verses on military rifle scopes. Every now and then, the forces of rationality actually score a point. Watch for this to be characterizes as persecution, of course, given the conservative fetish for victimization.

Ten Craziest things Pat Robertson Ever Said — And this man has had direct access to how many presidents? And the loyalty of how many millions of voters? Christianism is a poison in our society, pure and simple.

?otD: What do you think I saw? 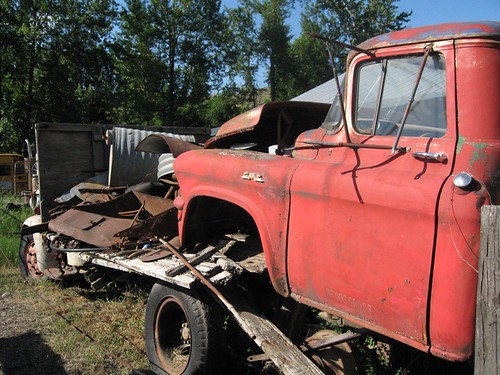 Yesterdy was day one of session two of chemotherapy for me. Each session last about 54 hours, from midmorning Friday to mid-afternoon Sunday. The first six hours is at the infusion center at OHSU's waterfront clinic (a/k/a the Center For Health and Healing). Then I wear a takehome pump for 48 more hours.

Intake was simpler this time, because we knew what to expect. There also wasn't a bunch of training, like last time. However,

calendula_witch and I did have a terrifically entertaining conversation with one of the oncology nurse practitioners. This arose from a discussion of my side effects list [ jlake.com | LiveJournal ]. I'm not sure if the NP was impressed or appalled at the detail in the list, but we established several things, including that I did not have thrush, and that my fluid intake was insufficient.

The entertainment value was in a discussion of sex and side effects. We talked about the difficulty of condoms when erectile dysfunction was in play.

calendula_witch allowed as how I did have an exceptional libido. The NP did suggest a lot more fluids might help with the ED, which was something I'd never heard. We also talked about the risks of penetrative sex without condoms with a premature withdrawal strategy. Basically, my risk of bacterial infection from that vector is sufficiently low not to worry her, but the possibility of chemo drugs in pre-come is still an issue. The prospect was left open. The NP (a woman in her fifties, and a former AIDS educator in times past) laughed and told us that no one ever asks these questions. She said, "I wish you could talk to some of my younger patients, because none of them will ask an old lady like me about sex."

After that, and checking in for the third time (once for blood test, once for oncological consult, once for infusion — all at the same desk, all at the same facility, but separate check-ins for insurance tracking purposes, ahem), I got to sit in the big chair for many hours. The next chair over was occupied by a funny old woman who I'm pretty sure is an ageing protohippie, her partner with her. I knew a lot more about what to expect this time, including having my brain fry out on Oxaliplatin. Our only visitor was

tillyjane, as Mom and Dad and

lillypond were all out of town, and

shelly_rae didn't arrive til today. So it was quite low key and undramatic.

Now I'm having all the same effects as last session. Mild headache, extreme fatigue, fuzzy headedness, hard-of-thinking-ness. At least constipation has not taken me over, unlike last time.

shelly_rae from the train station, so we're all here now.