The sandpile model of Congress

The Other Terrorisms — Christianist lies, intimidation and murder against abortion. You know, the stuff that it's persecution to speak out against, despite the deaths and terror? I simply don't understand the Christianist obsession with forced pregnancy.

?otD: Are you curious, George? 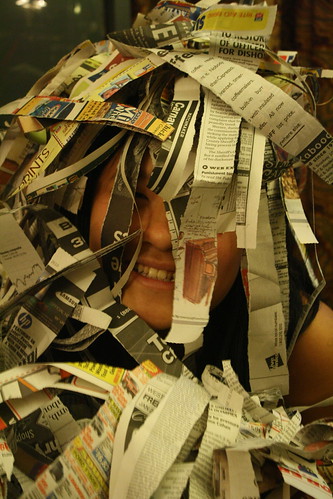 Yesterday, not to put too fine a point on it, sucked. I was exhausted by the chemo, more so than the previous session. We think this may have to do with me skipping the Lorazepam this time, and thus sleeping less overall. Also, the general increase in side effect intensity over time will surely play in. I did have the peripheral neuropathy act up both yesterday and this morning. Mostly, though, yesterday's issues were emotional.

the_child had a strong bout of cancer stress which was overwhelming. Some less dramatic but still draining life stuff was also in play. The bottle ritual [ jlake.com | LiveJournal ] was tougher this time, too. By the time evening rolled around, I was deep into spoon deficits both emotionally and physically.

calendula_witch flies home this morning. I won't see her for over two weeks, our longest skip in months. This is for various good reasons which have been fully discussed, but still I'll miss her.

shelly_rae trains home Wednesday. I shall miss her. Then I'll be on my own. Since we've pretty clearly established I shouldn't be left alone the first few days after chemo, this is all good, but I guess I'll get to be a solo-flying grownup later this week.

I am looking to move some furniture between two rooms of my house, definitely on Saturday, January 30th. Due to chemotherapy, I'll be pretty useless for this except as a traffic director, and the effort involves both some heavy lifting and some cleverness as most of my tech gear will be relocating in the process. Will take some hours, I expect, all told.

Anybody in for beer and pizza and maybe some free books? (Other foods as well for those not on a beer-and-pizza diet.) Let me know in comments, and I'll track by email as the week goes on.

Current plan is for a "first shift" around 10 am to break down files, move small stuff, etc., and generally clear the way. "Second shift" around noon to deal with large, bulky furniture type issues. And we have one item, a sofa, that need to be moved across town if someone has a van or truck.

I've got some RSVPs already, but feel free to renew/remind me, even if you've already replied.