Ursula K. LeGuin interviewed on the Google Books Settlement — I continue to refer to GBS as "banal evil", but I suspect Ms. LeGuin would drop the adjective. And she swings a much bigger bat than I do. (Snurched from

B-24 over Ploeisti — Striking WWII photo from x planes.

Mod 1966 ad for Frigidaire refrigerators and freezers — Check out the model's costuming in this ad. Wow. I think we need a space age fashion revival.

OInternational Space Station comes together — A cool animation of the construction process. (Thanks to KOF.)

And a gorgeous photo of the ISS, from APOD

Is Democracy Killing Democracy? — The founding fathers saw this coming, but the walls they erected to contain the mob may no longer hold. Tea Party, anyone? Or for that matter, Coffee Party? (Thanks to my Dad for that link.) The GOP has always had it wrong. Government isn't the enemy, government is us.

Right-wing media praise Bunning for blocking worker pay, relief to unemployed — Stay classy, GOP. It's what you do best. While people starve. Are you proud of your Republican Party?

Beat Them, Sure -- Just Don't Annoy Them — More likely, [the Senate Republicans] just overlearned the lessons of 1993-1994, and are operating under the mistaken impression that obstructing the majority is always good politics for the minority. On top of that, Republicans do seem much more interested in the short-term reactions of conservative talk show hosts than they are in, well, anything else

?otD: How can he be wounded if he's got no heart? 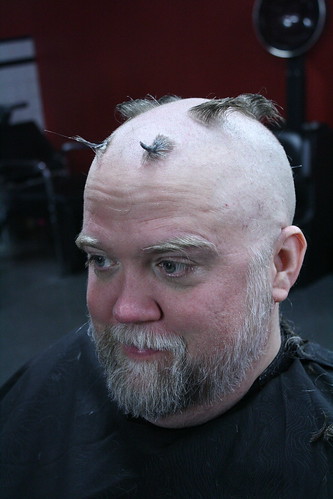 This work by Camille Alexa is licensed under a Creative Commons Attribution-Noncommercial-Share Alike 3.0 United States License.

Magic Mouthwash works. It tastes like library paste mixed with eau de hospital floor, but it pretty much stuns my mouth into submission. That in turn reduces a lot of my general distress, and more or less eliminates my pain.

In other news, I slept much better last night, albeit a bit short yet. If I'm really going to keep waking up at 3 am, maybe I need to start going to bed later than 7 pm. Ah, the joys of chemo.

calendula_witch arrives in a few hours, then given that I'm feeling rather better, we're off to Rain Forest Writers Village. Unknown bandwidth for blogging the next few days, so you may be forced to talk amongst yourselves.

tillyjane and I went to see John, my stylist and Hero of the Revolution. (It was he who washed the blood out of my hair last December, far above and beyond the call of duty [ jlake.com | LiveJournal ].) Camille Alexa met us there, and

Our mission? To remove my thinning hair from my scalp.

John is a Hero of the Revolution, I say again. He took what could have been an emotionally difficult fifteen minute clip job and turned it into an hour or so of shear madness. A lot of silliness, a lot of laughter, and I left smiling.

I am pleased to announced that PostScripts has accepted my new story "Her Fingers Like Whips, Her Eyes Like Razors" for publication later this year.