Sally Forth on writing fantasy

The Roaring Secret — Ruthanne Reid on psychotic persistence and other writerly virtues.

Day 21- Running 6 Miles! — Blake and I inspire through the Internet. You don't need to shave your head in solidarity, but if you've been following my journey, go excercise, mm? And if you're 50 or older, get tested for colorectal cancer. It can seem embarassing to get a colonoscopy, but doesn't hurt, and early detection is key.

Taking Stock in the Testimony of the Crowd — Social media as history, reportage and social justice. (Thanks to my Dad.)

Great moments with Mr. Nixon — High weirdness from one of America's greatest Republicans. Any party so much into its own history as to call itself the "party of Lincoln" (that well-known champion of states' rights and Federal noninterference) needs to own Nixon and McCarthy, too, just as fully.

Lesbian Sgt. Discharged After Police Tell Military — The 28-year-old's honorable discharge under the "don't ask, don't tell" policy came only after police officers in Rapid City, S.D., saw an Iowa marriage certificate in her home and told the nearby Ellsworth Air Force Base. Stay classy, conservative America. It's what you're best at.

More on the insanity of Texas textbook standards — Out of control conservative revisionism is ruining education for the next generation of all American children. And we wonder why we're losing our competitive edge. It's disgusting, quite frankly, and directly opposite to the "America First" ethos of those self-same conservatives. Not that intellectual consistency is any virtue for them.

Lessons from the Medicare Prescription Drug Benefit vote — Here are some things that happened on the night the GOP pushed the Medicare Prescription Drug Benefit through the House of Representatives Much dirtier pool than anything the GOP is crying foul about over the current HCR process. Thank goodness for the Memory Hole, or voters and the press might actually notice some rank hypocrisy here. Nah, they're Republicans, they must be doing the right thing. No anger from the Tea Party over this stuff, either.

Is US politics nastier than ever? — Hey, Tea Partiers, if use of reconciliation to pass HCR means civil war, as quoted in the article, where was your anger when Republicans used it repeatedly?

The New Rove-Cheney Assault on Reality — To hear them tell it, 9/11 was so completely Bill Clinton’s fault that it retroactively happened while he was still in office. The Bush White House is equally blameless for the post-9/11 resurgence of the Taliban, Al Qaeda and Iran Ah, the Memory Hole. Supported by Your Liberal Media. These are conservative lies of Big Lie proportions, that largely go unchallenged.

?otD: Where did you leave your heart? 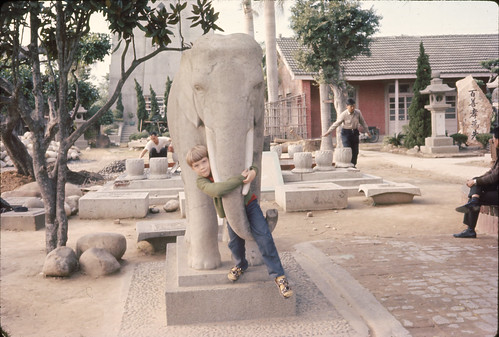 Portrait of the author as a very young man, age 7, Taiwan. Photo by J. Lake, all rights reserved. Reproduced with permission.

Yesterday wasn't as vegetative as normal for infusion day 2, as reported here by

shelly_rae. Still, by the time we returned from lunch I was blown out. Did manage to Tweetsnark 2012, which was every bit as wretched and cliched as expected. Have been watching Clone Wars episodes to while away the empty hours.

Be off the pump sometime this afternoon. The bottle ritual will follow. Planning to do a little head/hair maintenance. Would like to shoot photos of the new Genre car, but that may be too ambitious for the day's energy budget. Mostly, as always with chemo, I veg.

Be well, or at least better than me.