A rather spiffy review of Other Earths from

jpsorrow — Edited by Nick Gevers and me.

Why We Need to Dream — (Via @JESilverstein.)

For One Tiny Instant, Physicists May Have Broken a Law of Nature — (Thanks to

Dark Matter is a nefarious liberal plot? — This is why people like me tend to assume conservatives are crazy, stupid or both. Because moronic crap like this gets spread.

Non Sequitur gets political again — In a very weird way. Also, note the portrait on the wall in the last panel. Heh.

Bernanke: Too big to fail a "pernicious" problem — Hmm. Bush administration. TARP. Bank bailout. Nope, must have imagined it. Can't remember a damned thing about conservatives or market self-regulation myself. Can you? Nope. Good thing the Tea Party knows who's responsible!

Menacing — Ah, opposition to HCR. If you've got nothing on the merits of the issue, personally threaten the opposition. Stay classy, conservative America. It's what you do best.

Entitlements Are Never Repealed — Conservative commentator Daniel Larison on healthcare reform, and comparisons to the Civil Rights Act. He also makes some good observations about the ideological history of the two major parties, including connecting a few dots I hadn't connected before. As usual, I don't agree with everything he says, but it's a good read.

Deep South calls in Iran to cure its health blues — In ground-breaking project, one of America’s poorest communities is turning to the Middle East to try to resolve its crisis. Iran's healthcare outcomes are much better than Mississippi's. As the article says, The southern state has the highest levels of child obesity, hypertension and teenage pregnancy in the US. More than 20% of its people have no health insurance. Both of Mississippi's Senators and three of the state's four Representatives oppose the healthcare reform measures in play now. If it ain't broke, don't fix it? This is how conservatives define a working healthcare system, apparently. Are Mississippi's outcomes what you want for your family, your friends, your state?

?otD: Do you really believe that having worse infant mortality outcomes than Iran is a success for market-based healthcare? 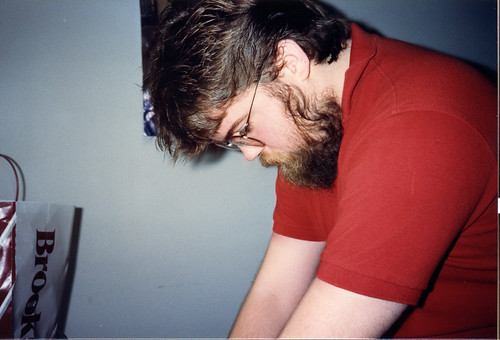 Portrait of the author as a younger man. Me at 19, back in Austin. Photographer unknown.

Another poor night, though not so bad as the previous. Woke up again after about 4 hours' sleep with a burning throat and severe dehydration. Woke up this morning with a heavily productive cough that passed quickly, so I think that was post-nasal drip pooling in my chest. Friday's chest congestion seems to have passed. Still have plenty going on in the upper respiratory. Temp this morning is 97.0, which is about normal for me. (I can routinely run down in the 96.x range.)

So long as I don't run a fever, this isn't directly engaging any of my chemo risks. The obvious conclusion is a mild spring cold of the viral persuasion, which under normal circumstances would barely slow me down. As I have extremely limited physical reserves these days, simply sitting still is exhausting. My plan to do my taxes this weekend is zeroed out, and (much more frustratingly) I am also getting no writing done on "The Stars Do Not Lie". Or the Sekrit Projekt. Or anything else.

It's weird how I can write even through chemo, but a stupid cold slows my brain down enough to stop me. Friday as the infection built up (I think it started Thursday afternoon/evening) I could feel myself shedding both IQ and EQ. I got dumber and less perceptive as the day went by. This is not unlike what happens on chemo weekend during the infusion process.

And while I'm terribly frustrated to lose my "good" weekend to this cold, I suspect the consequences of going into the infusion center with a cold would be far worse. First of all, they wouldn't want me in there for fear of infecting the other patients. Second, I'm pretty sure they wouldn't hook me up while I'm fighting this. So even while I am unhappy about the timing, I recognize it could have been far worse.

calendula_witch arrive this coming Thursday. Chemo infusion session six of twelve starts Friday. My job right now is to get well. But damn it, I want to write. (And blog, some topics backed up in my head.) Need my stoopid brain back from the grip of this virus.