Powell's Book at Cedar Hills is advertising my Pinion signing this coming Thursday — Note the sale listing for "Jay Tobias Lake". This is a database error from last year, which helped mess up the Green launch because the book couldn't be ordered through the Indie booksellers without a lot of special effort. Unfortunately, this can damage a book's P&L, and publishers have a "no excuses" attitude toward bad P&Ls. So through no fault of the me, the book or my fans, I'm going to look bad on the accounting because of someone else's database error which is now over a year old. No, publishing is not all rainbows and lollipops.

Carrie Vaughn on why she left her publisher

Obey, Servants — This story about a police tasering in Seattle has some odd echoes to the Peter Watts case. Apparently, simply failing to comply with any statement by a law enforcement official is now a taser-able or arrestable offense, regardless of the situation. Thank you USA-PATRIOT Act, among other things. Do you feel safer from terrorism now that pregnant women can be tased while sitting their cars and marine biologists can be arrested for asking why they're being punched in the head?

Ideological Brain Freeze — But here's where David and I agree: we both grew up when conservatism was intellectually sharp and interesting. Its current brutal anti-intellectualism, its open hostility to moderation in any form; its substitution of purer and purer ideology for actual, pragmatic ideas: these are trends that have left a lot of us on the center right marooned.

Whose Country Is It? — The New York Times on demographics, conservative and the future. Even the optics must be irritating. A woman (Nancy Pelosi) pushed the health care bill through the House. The bill’s most visible and vocal proponents included a gay man (Barney Frank) and a Jew (Anthony Weiner). And the black man in the White House signed the bill into law. It’s enough to make a good old boy go crazy.

Victim of road rage sparked by Obama sticker pleads for civility — Yeah, I remember all the vehicular assaults on people with "W" bumper stickers. Liberals do it too, right? And certainly giving everyone the means to see a doctor when they're sick is a valid excuse for conservative rage. (Thanks to my Aunt M.)

Bachmann: '100% Of Our Economy Was Private' Before September 2008 — "It is really quite sobering what has happened. From 100% of our economy was private prior to September of 2008, but as of Tuesday, the federal government has now taken ownership or control of 51% of the private economy." So apparently she's never heard of Social Security, Medicaid/Medicare, defense spending, public works spending, SBA loans, student loans, public universities, Fannie Mae and Freddie Mac, etc. ad nauseum. Must be nice to be a Republican and believe any stupid bullshit that comes into your head regardless of those pesky facts.


?otD: Have you ever been to heaven? 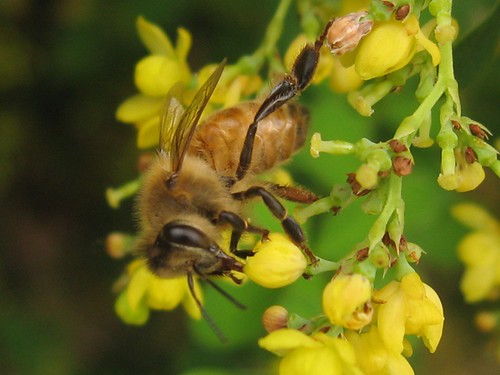 I believe in freedom of speech. You and I have every right to be wrong, but freedom of speech doesn't mean we get to make up our own facts, and it doesn't protect us from being called on hypocrisy, bullshit and lies.

I believe in freedom of the press. But with freedom comes responsibility, and the press has lost its way in terms of balancing coverage of issues, recalling or reporting any political history past last week, and serving the public interest. The shift from news to infotainment has taken us back to the nineteenth century yellow press, and done much to poison the public discourse.

I believe in the right of peaceable assembly. This does not include bringing firearms to peaceful demonstrations, spitting on Congressmen, or blockading city streets.

I believe in the right of redress to the government for grievances. Being arrested for questioning your beating by a law enforcement officer is not part of this process.

I believe that a well regulated militia is necessary to the security of a free state. That's why we have a National Guard and Reserve forces.

I believe in the right of the people to keep and bear Arms. On firing ranges and in gun safes, not on public streets. Because I believe my right not to be shot trumps your right to open carry, for example. And the statistics on gun deaths are never on the side of freely available weapons.

I believe in my protection from the quartering of troops. I do not believe that NATO or the UN or the Federal Government is planning to station troops in my home, no matter what the Republican party claims. Regardless of one's psychological disturbances, this fails the common sense test. There are over 100 million households in the United States, and no one has that many troops.

I believe in protection from unreasonable search and seizure. This means I oppose USA-PATRIOT and all its dependent laws and regulations, including the Telecom Immunity Act that Obama supported. Our system of warrants and judicial oversight worked quite well before we tore it apart in the name of the War on Terror.

I believe in the right of due process, and protection from double jeopardy. Again, this means I oppose USA-PATRIOT and all its dependent laws and regulations. The prisons at Guantanamo Bay and Baghram Air Force Base are stain on American honor as deep as the Japanese internments.

I believe in protection from self-incrimination, but I also believe in taking full responsibility for one's deeds.

I believe in criminal trial by jury and the rights of the accused. Just because someone is suspect of a crime, or arrested for it, does not mean they are guilty. Again, the prisons at Guantanamo Bay and Baghram Air Force Base are stain on American honor as deep as the Japanese internments, and a blot on our judicial system. I also believe in fully-informed juries, not subject to manipulation by either prosecution or defense.

I believe in the right to civil trial by jury, again, without manipulation by either party to the suit. I also believe that the right of civil redress should not be dependent on the deepness of the parties' pockets, as this means the rich and powerful can never be fully called to account

I believe that we should be protected from cruel and unusual punishment. Again, this means I oppose USA-PATRIOT and all its dependent laws and regulations. The prisons at Guantanamo Bay and Baghram Air Force Base are abuses upon our perceived enemies that will come back to haunt captured Americans, possibly for generations.

What do you believe?