Demand for iPad Is Put to the Test in Debut — Will it fly? I don't know. But I am always amused, and sometimes annoyed, at the societal and cultural critiques of Apple product releases, which seem to range from "Steve Jobs is teh evul" to "only Apple fanboys care about [x]". The iPhone tells one story, AppleTV tells another. We'll see. And yes, I've been an Apple fanboy since the Mac 128K.

Whose Hand Controls the Global Thermostat? — A question that has not been addressed, and may be unaddressable. Also a ripe topic for some SFnal exploration.

At Vatican Service, Persecution of Jews Is Invoked — A senior Vatican priest speaking at a Good Friday service compared the uproar over sexual abuse scandals in the Catholic Church — which have included reports about Pope Benedict XVI’s oversight role in two cases — to the persecution of the Jews, sharply raising the volume in the Vatican’s counterattack. Ok, the Catholic Church has totally jumped the shark here. I've not commented on this much, because there hasn't been much I can add to the obvious, but at this point the Vatican is officially more insane than the Republican Party. (And you know how I feel about them.) That these monsters exert moral leadership in the American conservative movement is a disgusting shame to everyone involved.

Jews outraged at Vatican scandal comparison — No one could possibly have anticipated this.

Rush Limbaugh on the current administration — Never in my life have I seen a regime like this, governing against the will of the people, purposely. I have never seen the media so supportive of a regime amassing so much power. And I have never known as many people who literally fear for the future of the country. Obviously he doesn't remember the Bush administration where an unelected president with a minority of the popular vote prosecuted an unpopular war on false pretenses against majority opposition, while advancing the "unitary executive" theory and destroying America's reputation worldwide. But neither does anybody else, so what the hell?

?otD: Will you buy an iPad? 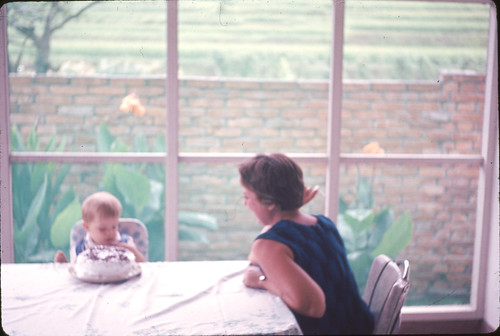 My first birthday. Me with

Woke up this morning from a decent, and fairly long, night's sleep; and was immediately rather sorry I had done so. ( Collapse )

At any rate, between the fatigue-riddled mess that is my body and the state of my eyes, I'm going to beg a lift to the hospital this morning to visit Mother of the Child. (I have no business being behind the wheel of a car today.) She's up for a series of tests today to determine if she's healing sufficiently from Tuesday's medical error to come home tomorrow. She is out of ICU, at least.

In other news, last night I dreamt that

casacorona hired me to work as a bank auditor, a job for which I am supremely underqualified in real life. I spent a bunch of time futzing with data normalization issues and flat screen monitors while the soccer fields flooded.

Otherwise, it's another day home lying in the chair to me. Taxes postponed again, though if I manage to stay mentally alert, I might finally get to some writing.

Cripes, it's been a tough week.