The End of History (Books) — Nonfiction, copyright, and the age of the iPad.

Helping Patients Face Death, She Fought to Live — The unexamined assumptions embedded in this line of the story really challenge me: She was fortunate that she could afford treatments not fully covered by insurance, hundreds of thousands of dollars' worth over the years. Too bad for the rest of us not married to Wall Street portfolio managers, huh? Good healthcare really is a privilege of wealth and resource. Even in my case, with my nice white collar job and good benefits. This is what conservatives are righting to protect when they oppose HCR — the privilege of wealth and resource.

Monstrous Aviation: World's Biggest Airplanes, Part 3 — Dark Roasted Blend with a roundup of weird, huge aircraft. Though the SR-71 in real life is quite tiny. (I've seen a fair number of these in museums.)

The iPad Has Not Changed My Life — This Technology Review blog post rather misses the point. After using an iPad for a day, I'm sad to say it hasn't revolutionized my life with its magicalness. And it won't on, day one. Any new technology that has changed my life (and some have) has always done so in unexpected ways after I've spent some time experiencing it. I use my iPhone very differently than I've ever used any previous phone, largely due to the location-based services. Yet the first few weeks I had it, I nearly returned the thing, it frustrated me so much. Now I would be very frustrated if I had to give it up. (And yes, today there are competitive equivalents, but only because of the position and functionality the iPhone staked out.) So to say on day three of its release that iPad has not changed your life is fatuous at best. Tell me that in six months, I'll believe you.

It's a Bird, It's a Plane, It's Obama! — Frank Rich in the The New York Times on Obama's protean image. No wonder that eight major new Obama books are arriving in the coming months [...] And that’s just counting those by real authors, like Bob Woodward and Jonathan Alter, not the countless anti-Obama diatribes. Hahahahah.

?otD: If you had an airplane, would you get to work on time? 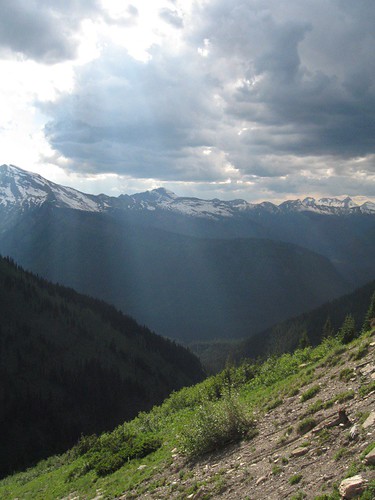 After sleeping 11.5 hours Saturday night with the aid of Lorazepam, I slept 8.5 hours last night, without chemical assistance. That much sleep means my body is really wrecked. I did feel fairly normal yesterday, for that current value of normal which includes "absolutely wrung out from chemotherapy", but no longer in the deep exhaustion mode of Saturday. The fatigue just layers deeper and deeper.

I'm still hoping this was all bad feedback from the cold of two weeks ago and subsequent no-reserves chemo, plus the stress of Mother of the Child being in the hospital for six days. She did come home yesterday evening, thanks to the good offices of my parents in providing transportation and logistics.

the_child is home as well from her peripateses, and caring for her mother. That's good for both of them. However, as Dad pointed out over Easter brunch yesterday, I shouldn't fix my hopes too much, as the chemo process is cumulative.

This last week was the first time the physical stresses managed to completely derail my writing. I'll be back on track this week, at least through Thursday, before chemo robs me of my writing again in its usual fashion on Friday. A bit different schedule this week, as I am having my bloodwork done a day in advance, so if they need to wave me off, they can do so before I blow a workday. Between myself,

shelly_rae, the logistics are complex.

calnedula_witch will be here Wednesday evening, via the Witchmobile. She has Real Estate Stuff to do Thursday.

shelly_rae will be here late Thursday evening. We don't go in Friday as early as usual, due to the appointment schedule. This is actually troublesome for me, as mornings are my best time, so doing the actual chemo infusion from midday to midafternoon instead of from midmorning to early afternoon will challenge me a bit more.

This is a difficult post. When I found myself afraid to make it this morning, I realized I had to do so. My response to fear, once I get past whatever initial panic might be involved, is to step towards whatever scares me.

The so-called "Race Fail" last year was very troublesome for me. I found myself being vilified by total strangers based on other people's interpretations of a few words of mine in a blog post. I found myself being held up as an example of ignorant, arrogant white privilege. I found a lot of things being said about me that were flatly untrue, grossly misinterpreted, or simply assumptions based on my skin color and gender as portrayed in my blog's icons — in that last case, flatly stated as such.

I was told during the course of "Race Fail" that growing up in nonwhite countries (primarily Taiwan and Nigeria, for reference) did not give me any perspective on race. In other words, my white-ness trumps any possibility that my life experience might influence my development or perceptions.

the_child is adopted from China) did not give me any perspective on race. In other words, my white-ness trumps any possibility that my child's life experience might influence my development or perceptions.

Since then, I've self-censored almost completely on issues of race and gender here on my blog. Not in my fiction — go read Green if you want to see me talking about those subjects — but here in my daily musings about life, fiction, politics, cancer, parenting and whatnot. It simply hasn't been worth the trouble of defending myself every time I open my mouth, of having to laboriously re-establish my credentials and standing to even express an opinion on race or gender.

Am I complaining about being a white man? No. I am keenly aware of my privilege in society, even in the smallest ways. If I step up to a mobbed deli counter without a line numbering system, I'm often the next one called, ahead of people waiting far longer than I. I always defer to the people around me, precisely because I am aware. My paycheck every two weeks reminds me of my privilege. My occasional conversations with law enforcement remind me of my privilege. My nice house in the suburbs, my spiffy convertible, my pile of tech gear, my current standard of medical care in the face of recurring cancer — they are all privilege.

Ironically, one of the few places where white privilege isn't overwhelmingly woven into the baseline of society is fiction. I say this as someone who's edited numerous open anthologies, and submitted to something like a hundred markets. Manuscripts don't have gender or race. As an editor, I stopped looking at by-lines years ago, given how many people write psuedonymously. And speaking as someone who often writes characters who are not what I am (white, middle-aged, male, Anglo-Saxon), I long ago stopped assuming anything about the author's identity from their characters or settings.

All of which is to say, a commentor questioned why I'd linked to a recent review of Mainspring that took me to task through the lens of white privilege. My answer, likewise in comments, I have decided to repost here, because I think it's important.

I firmly believe the story belongs to the reader. Whether that reader is fan, a reviewer, or some random gal from Dubuque.

I also firmly believe the writer is not the story.

I also know that I am neither a racist nor a sexist, unless the reader subscribes to the theory that all white men are racists and sexists. In which case there's not much I can do about that reader's perception, since they're already prejudiced against me and anything I might have to say.

Finally, there's absolutely no point in arguing with reviewers, with the very narrow potential exception of errors-of-fact. Arguing with perceptions is futile. The words really do need to speak for themselves, even if the reader is hearing things I didn't put in them.

As far my personal place in this, anybody that's read more than a few words of my fiction or my commentary would know pretty damn well where I stand on issues of race, culture and gender as a strong liberal-progressive. If they haven't, then they're judging me based on their own misperceptions, and that's too bad for them.

The other thing I should have said differently is to note that of course I am racist and sexist. I am a human being. We all distrust the other. It's hardwired into us. My responsibility as a human being, as a parent, a writer, a citizen, is to manage those impulses in such a way as to overcome them. Yes, I'm racist and sexist, every bit as much as someone who judges my words or dismisses my opinions because I am a white male is racist and sexist. As a white male at the top of the power curve, I bear additional responsibility for overcoming those tendencies.

That last is something I've been keenly aware of since about the age of 19, and worked diligently on all my life. Which you'd never know from looking at my face or my name, would you? You'd only know by listening to me, or reading my words.

So here's me, facing my fear of speaking up, and trying to end my self-censorship. Because I find the self-imposed censorship has only stoked my resentments, and that's less healthy than shutting up. Much less healthy.