A fan video about me, my shirts and my fiction — Funny stuff, courtesy of the inestimable

davidlevine with an update on A Writer's Weekend — Still two slots open to work with him and me this summer.

Octopus flees with camera — Cute and funny. (Thanks to

xkcd on the iPad — As is often the case, the mouseover makes the strip.

The View From Movement-World — Conservative commentator Daniel Larison on the "cocooning" of the conservative mind, with attention to the memory hole. (As I've commented before, I suspect Larison and I don't agree on very many points of politics or policy, but I respect his intellectual honesty and careful thinking.)

Tea party activists protest excessive taxation, government spending in D.C. — Which would make more sense, if, you know, 98% of Americans hadn't already seen their taxes reduced under Obama. But conservatives never were much for letting facts get in the way of their opinions. Besides, he's a secret Muslin Socialist, so it must all be true.

Have Republicans Been Out-Foxed? — Some conservatives are beginning to question whether Fox News is good for their movement. This is hilarious: Bartlett wonders if ultimately "an inherent conflict of interest is growing, in which the very success of Fox makes it harder for Republicans to get out of the echo chamber, to have arguments that go beyond their base, and to reach out to independents and Democrats who might vote for them." No. You think? Liberal bias, obviously.

O'Reilly lies to Coburn: 'Nobody's ever said' at Fox you'll go to jail if you don't buy health insurance. Oh yes they have. — Shockingly, someone at FOX significantly misrepresented the truth. Equally shockingly, the sun rose in the east this morning. They distort, I deride.

?otD: What's the highest altitude you've ever been at, outside an airplane? 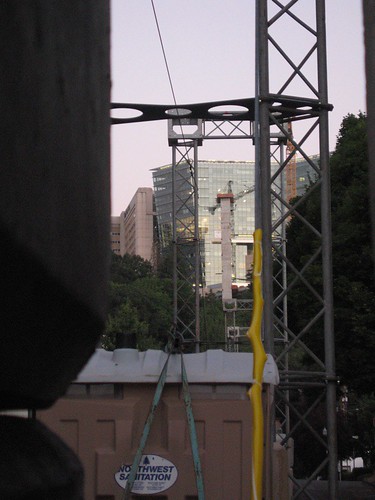 Been a bit of a disruptive week for non-cancer reasons, such as me oversleeping yesterday morning. Which I've done twice since the cancer stuff started, and, erm, none in many years before that. Once I get a little bit behind on my day, catching up is somewhere between beastly and impossible.

I'd intended to write more this week, but the last couple of days, after finishing "The Stars Do Not Lie", the brain has insisted on a break. Following advice from several quarters, I've been rereading favorite Discworld books. Turns out that while I cannot read new material, beloved familiar material is able to get in past the chemo stupid.

My main side effects this week have been fatigue and the usual post-chemo GI fail. Shedding Day, which was Tuesday/Wednesday this week, was as tedious as ever. Had some trouble getting to sleep last night because my gut wouldn't calm down enough, but managed it eventually.

Back to Endurance today. Still on track for deadline for that, and for the current Sekrit Projekt. Just signed a contract for a different Sekrit Projekt, which will probably surprise most of you when I get around to announcing it. A fair amount of business and sale activity lately in my writing life has been good for morale, if nothing else. I figure on being done with the current commitments by June, so I can draft Kalimpura this summer. Which is, yes, almost a year ahead of deadline, but it makes me happy to do that.

shaolingrrl is flying in this afternoon to visit for the weekend. I don't see her nearly often enough, so that is most def cool.

the_child wants to go to a movie sometime over the weekend. Plus writing.

So long as my body cooperates, it will all be good.

Among other political and cultural hobby horses of mine, I rattle on a lot about evolution denial in education. Likewise the gross historical revisionism of the Texas Textbook Commission. There's a reason for that, beyond my dedication to intellectual honesty and my aversion to hypocrisy.

Opinions, even those that come in the form of sincerely-held, passionate beliefs, do not substitute for facts. Especially inconvenient facts that contradict those opinions.

Yet when we teach kids in school that the objective evidence of the natural world can be disregarded for a subjective religious belief, we are teaching them exactly that. We are fundamentally undermining critical thinking and replacing it with magical thinking.

Magical thinking is something you see all time in adults. I don't know a single writer who doesn't indulge in it as part of preparing their writing mind. (Myself included.) Anyone who has a lucky hat, or cannot write without their tea in a special mug, or any other ritual, is doing this. But most of us understand that. I'm feeding the mythos part of my mind when I say I can only write on the Mac laptop, not the Dell. There's no objective reason I can't do it the other way around.

But I know I'm doing this. I don't confuse my own rituals and magical thinking with the objective reality of the world around me.

One of my big quarrels with the contemporary conservative movement, both in its media form (FOX, etc.) and in its political form (GOP, Tea Party) is the pervasiveness of magical thinking they indulge in, and their overwhelming tendency to confuse opinions with facts. Yes, that's human nature, and we all do it, but movement conservatism has institutionalized this as policy.

Note this item from a recent New York Times/CBS poll of the Tea Party:

Regardless of your overall opinion, do you think the views of the people in the tea party movement generally reflect the views of most Americans? 84% of the self-identified teabaggers said yes. Only 25% of the general public agreed.

And outside of the fringe, you see the same magical thinking. Every time the Republican leadership gets into the media and talks about America being a center-right nation, they're wrong on the face of both the polling and the electoral results. It's a narrative they believe in, and need to be true to back their political stance, but it simply isn't true. Any more than their narrative that a majority of Americans want to repeal HCR is true. Similarly, back in the 2000 election, when the Clinton economy was going strong, Bush advocated tax cuts to stimulate further growth. When the economy began to collapse in the face of an oncoming Republican victory, Bush advocated tax cuts to combat economic contraction. That's like saying you use the gas pedal in your car both to speed up and slow down.

All this confusing opinions with facts? A lot of it comes down to how you're educated and socialized in the first place. The conservative attack on education, which in its current form has been in play since at least the Reagan years, is about nothing more or less than raising citizens who don't know how to question their own position, who will uncritically accept passionate statements as truth, and who, like evolution denialists, eagerly embrace their own opinions as facts, unswayed by the reality of the world around them.

Censoring reality is profoundly unAmerican and unpatriotic, and it's a core conservative value, starting in the grade schools and going right on to the memory hole of FOX News, the GOP and the Tea Party. Reality is unforgiving, those opinions still aren't facts; but politics is infinitely malleable, as the activists and leaders of this movement well know.