My problem with steampunk — This essay more or less aligns with something I've said for a while: that in print fiction at least, and movies as well, steampunk is an aesthetic, not a movement. It doesn't have the sharply-defined themes or critical backbone that (for example) cyberpunk did/does. In fact, my forthcoming single-title novella The Baby Killers (from PS Publishing this summer) is my own attempt to address this, but I'm fairly certain I failed. Failed nobly and well, one hopes, but still... ETA: Updated to a more accessible link.

The Money Killers: 1917 — There's something about the phrase "Destruction Committee. Maceration of old currency" that just rolls off the tongue.

Discovering the Soul of the Ringlings’ Circus — Classic circus photos.

Listening to (and Saving) the World’s Languages — Lost languages in New York City. As Huey Lewis asked, "Where else can you do a half a million things / All at a quarter to three?" (Via Language Log.)

Why don't you learn German, Spanish, and French?? And Chinese and Arabic for good measure. — An essay about language acquisition, and how it plays into the immigration debate. Yes, Virginia, English is a darned hard language to learn. (Thanks to CH via

Strict Abortion Measures Enacted in Oklahoma — A second measure passed into law on Tuesday prevents women who have had a disabled baby from suing a doctor for withholding information about birth defects while the child was in the womb. Conservative America: an identity defined by persecuting pregnant women. Stay classy, guys. You do it so well.

The Party of No Credibility — This evidence accumulated over ten years shows a shameful but undeniable fact of American politics: our right wing now contains a lot more liars, and a lot more folks who spread lies out of gullibility or wishfulness, than our left wing. Also, this just in: the sun rose in the east this morning.

?otD: How many languages do you speak? 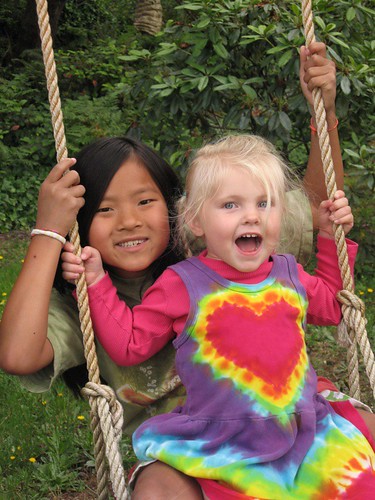 Writer Keith Garrett has a post up this week wherein he takes off from my comment about a boring life, made on Mur Lafferty's I Should Be Writing podcast. Coincidentally, I was discussing cancer and writing with Rob Furey in chat in this morning, when he observed that a lot of people in my position would just pick up the remote and sit on the couch.

As I said to Rob, I don't even have cable. I'd be watching a blue screen all day.

In point of fact, my life is not actually boring. It's damned interesting. Even now with cancer, and I don't just mean that in the proverbial sense of "interesting". But it's interesting in substantial part because of the choices I've made along the way. And those choices have been optimized around

the_child and my writing life.

I cancelled my cable in 1994. I've never had an antenna. While I still own a TV, and about a hundred DVDs and VHS tapes, I haven't watched a show on television in 16 years. Incidentally, I have a twelve year old daughter who has grown up without a working television in the house. She's never seen a commercial in her own home.

This wasn't strength of character, or some principled stance on the supposed evils of television. This was me realizing that I would turn on a Simpsons rerun at 6:30, turn off the TV at 10:30, and have no idea what I'd watched, or what I'd done with my evening. The biggest reason I drink very minimally, and gave up street drugs during the first Reagan administration, is that I hate feeling stupid. Drink and drugs make me stupid. And TV made me stupid.

I recovered an amazing amount of time in my schedule, and applied much of it to my writing. (This was seven years before my first sale, just in case you're tracking.)

Likewise, I stopped both console gaming and PC gaming in 2000, for essentially the same reasons. Disclaimer: I still occasionally play games on my iPhone, especially given the toilet-based lifestyle cancer has imposed on me. Sid Meier no longer owns my brain, however. In that case, the plot elements of Civilization-class games were so seductive to me that I found I wrote much less, and needed to write much less, if the itch was being scrapped by gaming. So no more games for me.

Given the amount of D&D and AD&D (first edition, just in case you're tracking) I played between about 1978 and about 1988, if the modern immersive online gaming experience had been available back then, I doubt I'd ever have made it as a writer. World of Warcraft would have carried me away on a happy tide of leveling up and raiding, much as LSD could have carried me away on a happy tide of color and sensory overload if I'd let it. I am of the opinion that we've lost a meaningful part of a generation of writers to online gaming for much the same reasons, though my evidence is purely anecdotal, not data-driven. (And for whatever that's worth, good for them if they're happy. Everybody makes their own choices — all of this is intended as observation, not criticism.)

So I don't leave my house much (working at home will do that to you.) I don't watch tv or game or go to parties or drink in bars. I sit home where I read and write. I exercise. I hang with my kid and my friends and loved ones. And I read and write.

Did I mention reading and writing?

Because in choosing not to pursue several of the most popular forms of entertainment in middle class American culture, I have made my life both more boring and far more interesting than it otherwise would have been. Cancer challenges me in some of these areas, but it's a transient challenge. Like having the flu for a year, with bonus mortality risks.

As I've written before, I hold passionate views on the role of Consumers and Producers in our culture. Everybody is a Consumer by definition. Not very many of us get to be Producers. And I love being a Producer. I'm raising

the_child to be a Producer, if she wants. Most of my friends are Producers, or working hard to be so. Being a Producer means giving up a lot of Consuming. Which is of course a paradox, as you can't be an effective Producer if you don't understand what Consumers want, need and love.

So I happily forgo my sixtieth-level wizard-god-kings and my nights telling jokes in the bar and ever seeing a minute of Buffy or Castle in exchange for my books on the shelf and my stories in your hands. That's just me. It's not even advice for you. But I'm here to tell you it works. When I'm not in the grips of cancer, the number of free hours I have to write is staggering, given what I don't do. A boring life holds immense rewards.

How badly do you want to be a Producer? What have you given up? What would you give up? What's an hour of writing (or art or music) worth to you?

As announced here, Realms of Fantasy has accepted my short story, "The Fall of the Moon", for publication.

So my iPad 3G arrived today. This is a result of a very generous gift of a group of friends and colleagues, spearheaded by Marti McKenna and

bhagwanx. About which more later, with immense gratitude. None of the following is a complaint about their love and generosity. No, my steely gaze is aimed at Apple and AT&T.

At the moment, I am wrestling with set up and configuration issues. And I have to say, this is the worst new Apple product experience I've had in my life.

To be clear, I've been a loyal and enthusiastic Mac user since 1985. The first machine I ever touched was a Mac 128 running System 1.1. I've owned or used (at work) almost every generation of Mac ever made. My current whip is a MacBook Pro, my current phone is an iPhone 3G. I have unboxed and configured many dozens of Apple products over the years. And all of them put together have not been as much trouble as the iPad 3G. My store of goodwill for Apple magic is ridiculously high, and my personal experience with the nuts and bolts is almost as high.

Problem one. In order to establish the AT&T data plan, I have to provide a credit card. iPad informs me that credit cards which bill to PO boxes cannot be used. Guess what? Every aspect of my financial life flows through my PO box for security reasons. The Visa card in my hand can buy anything anywhere in the world except an iPad data plan from AT&T. I've been on the phone to AT&T and Apple, had three callbacks, and no one seems to be able to do anything except tell me to change my billing address with the credit card company. I'm pretty sure this is an AT&T issue, but it stinks, and it's stupid. How many thousands of iPad 3G early adopters have had exactly that same problem today? Major joint AT&T and Apple fail, as yet unresolved.

Problem two. iPad synced my iPhone apps (which seemed obvious enough) but didn't sync their preferences. Sorting out how to fix that took me some time, even with my vast fund of Apple experience. If I'd come to this tabula rasa it wouldn't be an issue, but that a long-time Apple fanboy like me had to struggle to work this out seems very strange. Minor Apple fail, resolved.

Problem four. When I finally unplugged the iPad from the MacBook Pro, then plugged it back in, iTunes wanted to set up as a new iPad. So the hour and half I just spent configuring the iPad would be blown. I've rebooted everything, same problem. Again, something is very wrong here. Major Apple fail, as yet unresolved.

It's late in the day. My chemo brain is fading. I don't have time or bandwidth to spend the next few hours on the phone with Apple's tech support. The iPad is actually nicely set up and synced now, whatever iTunes happens to think, so other than the 3G issue, it's perfectly usable. I'll deal with this over the weekend.

But right now I have to say Apple has really handed me a lemon. These aren't the teething problems I had when I first got my iPhone. These aren't the fixable hardware problems I had with my dual-USB iBook back in the day. This is serious, fresh out of the box crap. I'm really looking forward to using this iPad, but I need it to work correctly with iTunes first, to have the right memory allocations, to sync, and to be able to subscribe to a 3G data plan.

Hey, Steve Jobs. Your magical device is pretty much blowing chunks so far.

AT&T confirms that iPad 3G data accounts can only be established with credit cards that bill to street addresses. No PO boxes. Like I said, I can buy anything anywhere in the world with this credit card except an AT&T data plan for iPad 3G. Absolutely ridiculous.

Thank you, AT&T, for this particular idiocy.

Thank you, Apple, for trapping us users with the idiots at At&T.