Recommended Review in LOCUS for “Devil on the Wind” — Per Mike Jasper, our little collaborative story is out in the world doing good.

Criggo has my favorite headline of the past few weeks

Apollo 7 in flight over the Atlantic — This image from Vintagraph is pure Southern fried awesome sauce.

Evidence based smear campaigns — The most cogent explanation I've ever seen of the conservative media strategy of the past thirty years. In a nutshell, why the outragous deliberate counterfactuals stick.

In Defense of Arizona — Ta-Nehisi Coates on David Frum's laughable justifications of the new Arizona immigration law. Racism is racism people, you can cloak it in principled rhetoric all you want.

Candidate says GOP liberated Europe in WWII — What does that even mean? Among other things, substantial portions of the GOP opposed our entering the war. More Tea Party nonsense, from a NY congressional candidate. For people who like to stand on history and tradition, their ignorance is appalling.

Police Find Car Bomb in Times Square — I will bet money on conservative terrorism, probably Christianist. Islamicists know how to build a working car bomb, for one thing.

Cuccinelli targets UVA papers in Climategate salvo — So according to conservatives, using public grants to research climate change is fraud. This is weirder, worse and more alarming than the usual textbook defacing and media manipulation of the Right. Now they're using the power of the government to directly suppress inconvenient facts.

?otD: Will there be phantoms and fires by the road? 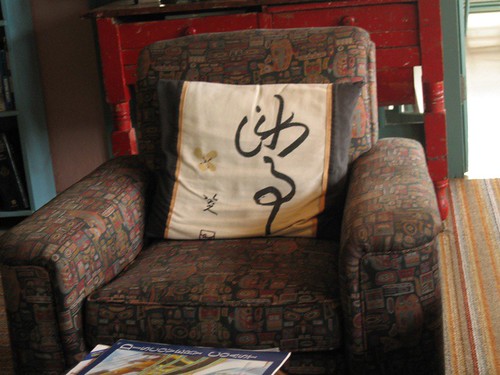 Had a dream last night that crossed over my writing life and Day Jobbery. Dreamt that a bunch of the Aussie SF krewe were visiting the Day Jobbe as consultants. Since I knew them, I spent a lot of time helping them, but somehow kept missing the parties. I was eventually sent out for beer, a trip which involved driving a rented hot rod, I think a late 60's GTO. The sound track kicked in about then, my hindbrain producing a credible cover of Leonard Cohen's "The Future" done at half tempo in industrial punk style with a mandolin driving the melody. Imagine Laibach and Gogol Bordello collaborating, with Marylin Manson on vocals. I was trying to eat a bag of McDonald's french fries and navigating an increasingly bizarre series of accidents, car fires and police roadblocks. Post-apocalyptic music pr0n?

And somehow, cancer never entered in to it!

Yesterday was a good day.

shelly_rae was here, along with

e_bourne. We Did Stuff, including watching

the_child dance the Maypole with her class at her school's May Faire, then lunch with all three of my parents plus visiting Aunt V—, then some needful erranding that wound us up at Powell's buying brag copies of F&SF with

e_bourne's new story in it. On the down side, they have returned to Seattle. Also on the downside, yesterday I was dealing with a fair amount of stress from the last week, and a pretty spectacular set of lower GI issues of the usual sort, albeit somewhat more intense.

I'm coming to terms with the fact that I can see the light at the end of the chemo tunnel, and that it isn't a burning locomotive racing toward me. Up til now I've been unwilling to look that far ahead, but "that far" is only about seven weeks now. If nothing slips medically, I'll come off the pump for the last time on June 20th. Which means sometime in July I'll start feeling like myself. I cannot wait to wake up one day and not feel tired, for the first time since Thanksgiving of last year.

Today I am well-rested from a decent night of non-chemically-assisted sleep, but still pretty wrung out. Other than a trip this morning to the Apple store to deal with my iPad 3G hardware issues, I am staying home and laying low, and for the first time in weeks, writing. Back to Day Jobbery tomorrow, Fireside Writers on Tuesday if my energy permits, and

calendula_witch returns to these here parts on Wednesday. (Her house purchase closed on Friday, btw, and you should go congratulate her.)

shelly_rae will be back on Thursday evening. Friday is chemo infusion session nine of twelve.

Here's hoping for peaceful day, and no phantoms or fires on the road for any of us. 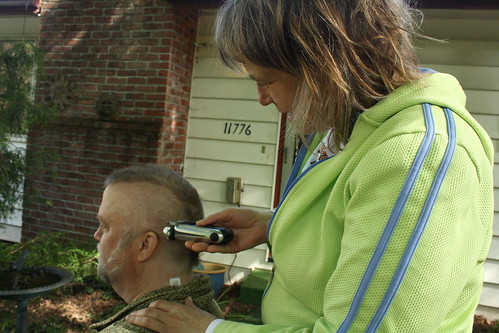 This work by E. Bourne is licensed under a Creative Commons Attribution-Noncommercial-Share Alike 3.0 United States License. 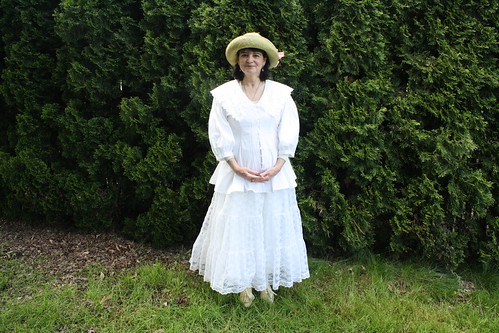 Mother of the Child, prepared for Mayfaire. 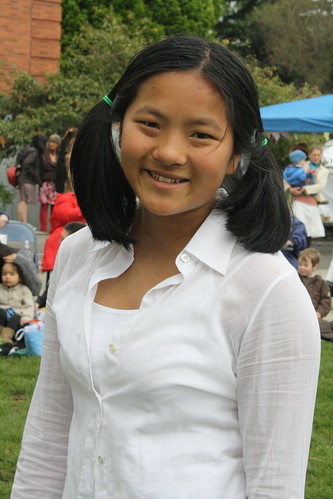 the_child in her Maypole costume. 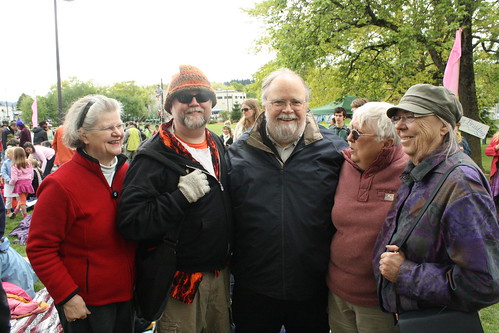 Me with Mom, Dad, 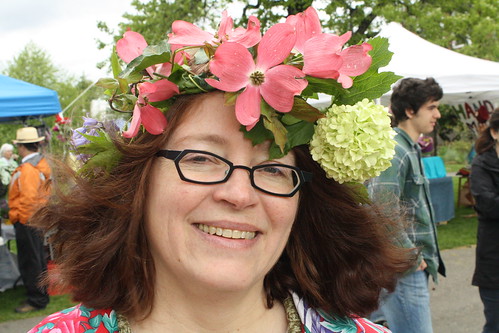 e_bourne in her lovely garland. 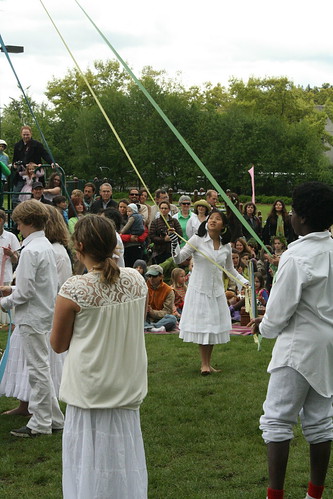 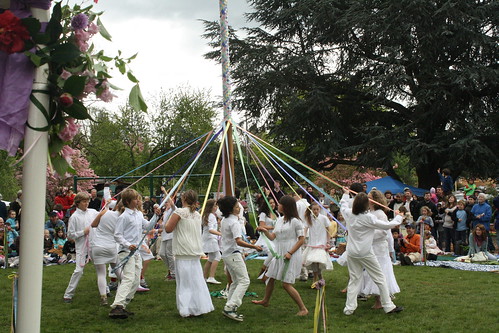 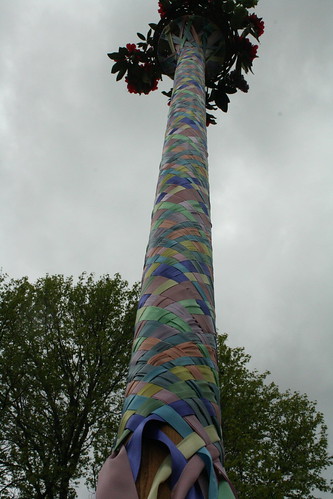 This work by Shelly Rae Clift and E. Bourne is licensed under a Creative Commons Attribution-Noncommercial-Share Alike 3.0 United States License.

Back from the Apple store. The very patient lady at the Genius bar sorted out my hardware problems with the iPad 3G (failure to sync correctly and failure to recognize the full memory available) as being a bad USB cable. I'd been using my existing iPhone cable, but somewhere along the line I'd crimped it at the head. When we used a clean, new cable, that set of issues vanished. Very simple fix that I should have thought of myself, as component swaps are troubleshooting 101. Apple win, with a side of user error.

The problem of iTunes not recognizing the newly configured iPad when it is plugged in for the second time is apparently a feature, not a bug. iTunes does in fact recognize the iPad, but the dialog box is misleading. Seems nutty to me, but it's also a one-time thing, so I'll get over it. Minor Apple fail, resolved.

AT&T fail continues in full cry. I will be pursuing it as time and energy permit.

Two more points, for now. This thing really is very cool, but man do I wish it had tabbed browsing. The iPhone's browser model is tolerable if disappointing on a phone, but for the iPad to really live up to its promise for me, more normal web browser behavior is critical.

Also, I owe a post expressing my depth of gratitude to the shadowy consortium of friends, fans and a few kind strangers who chipped in to buy me this thing. You guys are awesome beyond words.

And yes, I'm making this post from the iPad.

Now that the iPad hardware issues have been resolved, I did turn my attention back to the AT&T problem. (Which, for those just dropping in, is that AT&T will not allow credit cards with a PO Box billing address to be used to establish iPad 3G data plans.) I called my credit card issuer and had a long talk with a rep there. In the process, we went ahead and did a temporary address change to my street address so I could at least sign up for data and give it a shot. I'll be changing it right back to my PO Box (they don't have a provision for permanent reflecting two addresses) so it will be interesting to see if AT&T renews the plan next month.

The rep was astounded that I couldn't use the card for AT&T. They had never heard of such a thing. (Which confirms I'm not just mistaken here.) They searched their internal database and found no references to disallowing PO Boxes as billing addresses. After discussing it with them and doing some research on the Visa site, I'll be calling in tomorrow during business hours to lodge a merchant complaint against AT&T. Per the Visa site, I am encouraged to notify my credit card issuer of "any merchant practices that you feel are inappropriate." Not honoring a card with a legal address and no evidence of fraud certainly counts as inappropriate. I'm also planning to call Oregon's consumer affairs department, once I figure out which one (there are several) and lodging complaints against AT&T there as well.

In the department of minor ironies, I was trying to view one of the Apple guided tour videos on the iPad section of apple.com, to see if I'd missed anything about how to use Safari on iPad. The lack of tabbed browsing is a real issue. It took about ten minutes for Safari on iPad to stream me the 90-second video about how easy it is to view videos on Safari on iPad. I watched in 5-7 second blocks, repeatedly restarting. Um, yeah. And they say irony is dead.

Woke up this morning after a good night's sleep feeling fairly decent. Other than my morning trip to the Apple store for the iPad problems, I had a free day ahead of me. My energy was high. No medical crises were in evidence. I planned to log some hours on Endurance and just generally get back into writing after a multiweek absence due to stress and fatigue.

Instead, chemobrain decided to present me with a full scale emotional meltdown. I'll spare you the details, but I wound up going back to bed for an hour, and have been miserable and frazzled ever since.

Guess what? Another day without writing. I've been able to divert myself some with the iPad business, but quite frankly I continue to feel like crap. Angry, resentful, cranky and deeply antisocial. As anyone who's spent more than five or ten minutes with me can attest, these are not my usual behaviors by a long shot. And of course, Not Writing only reinforces my negative feelings.

Cripes I hate this. Seven more weeks til I begin to see some relief.