Stuff No One Told Me (But I Learned Anyway) — Hilarious. And somewhat thought-provoking. (Via @inkhaven.)

Seeing New York: 1904 — Electric buses and the Flatiron Building. It's just like today!

Palm-Size NMR — The portable but powerful magnet could be used to find archaeological artifacts or to detect contamination in products. Seems like a handy thing to have around the house.

Beta Pictoris b: A New Planet and Its Implications — More crunchy exoplanetary goodness from Centauri Dreams.

Autism and the search for simple, direct answers — PZ Myers with a very detailed and cogent analysis of some of the new evidence on autism. Note that it does not involve vaccination denial and the deaths of children through preventable epidemics.

Kids of lesbians have fewer behavioral problems, study suggests — Obviously we need to stop gay marriage in its tracks. Otherwise we might have well-behaved children. (Note to the literally minded, English orthography does not include a sarcasm punctuation mark.)

New Policy on Gender Change in Passports Announced — Very nice to see our government doing the right thing here. I'm about as GLBT as your desk chair, but I have a lot of GLBT friends, and very glad to see this, simply as a matter of principle and basic human rights.

Souter's Theory of Interpretation — Justice Souter said he well understood, and indeed had shared, that "longing for a world without ambiguity, and for the stability of something unchanging in human institutions." But he said he had come to accept and even embrace the "indeterminate world" in which a judge's duty was to respect the words of the Constitution's framers "by facing facts, and by seeking to understand their meaning for the living."

On this ground, zero tolerance — Arab-American Christians protest proposed New York mosque near 9-11 site, threatened by white Christians, then removed. No racism here, nope nope. Nothing but Real Americans. Nothing to see citizen, move along.

?otD: How many countries have you visited? What's your favorite? 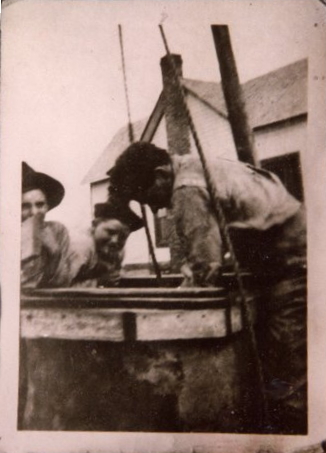 Yesterday was all about family. I'd had a talk the day before with

tillyjane (a/k/a/ my mom) about her medical followups wherein I expressed significant disappointment and worry about the very slow nature of same. Yesterday she called and told me she'd taken my words to heart and gone back to her medical team, with the result that instead of waiting two months to check out the suspected primary cause of her recent hospitalizations, they're doing it today.

Meanwhile, my brother flew into town yesterday for his more-or-less annual visit. We have our moments, but I love him dearly. Unfortunately, in a family full of motormouths (my sister

lillypond excepted, she could silently outwait a tulip blossoming), he has perhaps the most to say. He said it at length, and in some cases at volume, in a flood of long-time-no-see mixed with cancer fear. I know I'd so much rather see him engage than retreat, but it was tough to track along with and left me exhausted.

They finally swept out and I was preparing to go bed about 5:30 when

the_child came rushing in with her math workbook and an air of desperation. The school year ends next week, she has much to turn in, and she needed a lot of help. At this point in the chemo cycle, my brain is just emerging from dyscalculia, so while I don't have any trouble with the principles of arithmetic, geometry, algebra, et cetera, my ability to track and correct the details of her efforts is just wrecked. Not to mention having to explain the basic theory behind graphing at a time when I'm literally falling asleep with a nigh room temperature IQ. Which I did, successfully.

All of which is to say, I have a family and a life and they go on whether or not I am struggling with cancer and chemotherapy. It so wears me out, and I resent that.

More thoughts to come on post-chemo strategies and testing, when I get the chance. As it is, tomorrow is my dad and (step)mom's 39th wedding anniversary, so I'm working on having enough energy to be part of the family's celebration.

I don't think this was a cancer dream, not directly, but it was still fascinating.

At first I was on a large, rambling farm, possibly post-apocalyptic. Sort of a cross between Mad Max and Little House on the Prairie, minus Michael Landon. A number of other writers were present, and we were trying to get the farm equipment working. Lots of bits of business, as they say in the theatre, until I was exeunt, pursued by pickup trucks.

After that Mother of the Child and I were staying, separately, in a big old seaside hotel. It was pretty much the Inn at Spanish Head, filtered through dream architecture, including the spectacular views of the Pacific Ocean. She and I were trying to organize a party, the logistics of which kept slipping away from me in dream-logic fashion. We had a room, but not a time. Then we had a time, but not a room. Then we'd lost the guest list. That sort of thing.

I was called in to sit down to dinner with some visiting friends in a gorgeous dining room overlooking the ocean. My dinner guests were an older African-American woman and her three sons, a sullen teen-ager in dreads and giant t-short, and a pair of twins about

the_child's age dressed like kids in her class. Despite the invitation, I knew none of them. The mother was dressed traditionally in kente cloth with cowrie jewelry, much like the Yoruba women of my youth in Nigeria, and kept speaking to me softly, in a good-humored tone, in a language I absolutely could not follow, but suspected within the dream was Gullah. She would occasionally say something to her children, and the twins — very Americanized &mdashl chattered away at me like any ordinary American kids would. I kept wondering what the older boy wanted as he picked at his food, but he never would look at me.
...

What does it all mean? Heck if I know. Survival, competence, transition, acceptance, family, race, alienation, familiarity — enough themes here to fill a book.
Collapse