Two Weeks to Viable Paradise Application Deadline — If you're interested, go go go! Despite a strong desire to do so, I never made it to Clarion/Clarion West (application rejected) or VP or Odyssey or any of the other workshops as a student. One of my few regrets in my career so far. I hope to someday be lucky enough to make it as an instructor, but that's a tale for another time.

The excellent Doug Lain is teaching a writing workshop with Portland Parks and Recreation starting July 1st — Guest instructors include MK Hobson, Mary Robinette Kowal, Eileen Gunn, Ken Scholes, Tina Connolly and me. If you're in the PDX area, check it out.

Joe Haldeman on writing — I'm impressed with this one.

What Did Jesus Do? — Reading and unreading the Gospels. Part pop theology, part literary criticism, interesting reading in any case.

Windsor Shades: 1935 — Good gravy. Look at the chimneys on this thing.

Three Isn’t Always a Crowd: The Third Gender — The latest essay from Science In My Fiction, a fascinating survey of a complex, difficult topic. Which also led me to Sworn Virgins, which is a rich, strange story mine waiting to happen.

Arizona's Next Immigration Target: Children of Illegals — Given the widespread conservative rhetoric regarding strict Constitutionalism, why is it okay to throw out the parts you don't like? As in, say, the Fourteenth Amendment. If you're going to practice textual fundamentalism (Christian or otherwise), you don't get to pick and choose. If you're going to go for context and nuance, you've lost your claim to absolutist inerrancy pretty much by definition. If as some Arizona Republicans seem to be asserting, the meaning of the Fourteenth Amendment has changed with the times, why not the meaning of the Second Amendment?

The Hallmark of a black hole — This one boggles me. There's more than enough real racism in the world that needs dealing with. Why go looking for it in places where it just isn't there?

Because There Are No Racists... — Ta-Nehisi Coates on Rep. King's charges of black-on-black favoritism by Attorney General Holder. This reminds me of the conservative notion that gay-identified judges shouldn't rule on cases involving gay rights issues. Yet somehow, I've never seen or heard a conservative arguing that white male politicians favor white men, or that white male judges shouldn't rule on cases involving white men. Why is that?

?otD: How can we dance when our Earth is turning? 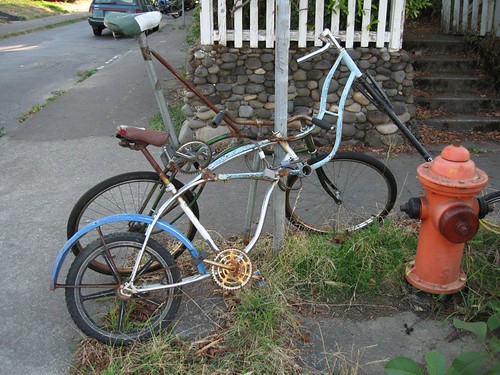 Slept uneasy last night. Don't know if it was a continued grumpy hangover or what. Day Jobbery shortly, then (hopefully) a quiet afternoon followed by an early evening's sleep.

calendula_witch arrives tomorrow on her last drive up here.

I've been thinking about two things: exercise and cussing.

I'm increasingly convinced that the reason I made it as far as I did through chemotherapy with any useful energy (such as it may be) is that I've exercised every damned day. I think I've missed perhaps two (non-pump) days in the last six months, plus when I'm on the pump it's different anyway. Every morning I spend at least thirty minutes getting my heart rate up and making my body move. I do it when I first wake up, because whatever energy I do have for the day is at its maxima then. Early in chemo I'd collapse around 4 or 5. These days, if I make it til noon in full-on mode, I'm lucky. But without the exercise, I might have wound up bed-ridden or nearly so. A thing that drives my heart.

Another thing that drives my heart is my commitment to kindness. For example, in social matters, one way I evaluate a person (friend, date, whatever) is whether they're nice to waitpeople. The "be kind to waiters" test tells you a lot about a person. Yesterday, my memory jogged as it occurred to me where I had first turned the inner corner on that. It was when I stopped cussing at other people while I drive. (Well, okay, it still happens on occasion, but far more rarely.) When I was younger, I'd scream my frustrations in the form of obscenities and nasty remarks at the people going too slow/too fast/where I wanted to in my way/cutting me off in the crosswalk/etc. I said a lot of things to rear windshields I'd never have dreamed, even then, of saying to people's faces. Anonymity is mightily empowering to rage, and not much is more anonymous than an automobile in traffic. What I finally realized was that I was programming myself to respond to incidents with anger instead of thoughtfulness, to drive (and behave) more dangerously, and ultimately, some really crappy behavior modeling for my daughter when she came along. None of that was worth the momentary warm glow of righteous indignation brought on by telling off some idiot who really deserved it. (Not to mention how wrong I probably was about other people most of the time.)

These days when someone blows by me in the crosswalk, breaking the law and endangering my life for the sake of a fraction of a minute's more progress down the road, I step out behind them with a big cheery smile and wave and shout "Thank you!" It's fairly passive aggressive of me, but it beats the hell out of just being aggressive, amuses me, and often amuses other drivers and pedestrians. More to the point, if they actually notice me, I'm not retroactively justifying their misdeeds by flipping them off or something. Maybe they'll even think about what just happened in some mode other than dismissive, defensive anger. I'm not quite so demonstrative behind the wheel, as frustration still leaks in and such broad communication is rarely possible (unless I have the top down), but I also try not to say or do anything I wouldn't say or do to the other driver face to face, in public.

One thing I'm still wrestling with, significantly so, is managing my expectations with respect to coming off of chemo. When I come off the needle this coming Sunday, I'll be done. Except I won't.

First of all, I have the same two-week post-infusion cycle. Which is to say, horrendous fatigue, disastrous lower GI behavior, the same nine yards I've been experiencing with ever-increasing intensity for the past five and half months. So while my brain will be thinking, "Hey, chemo is over!", my body will actually be more stressed than ever.

I don't expect to see even the beginning of bounceback until I pass into the second weekend. Which happens to be the weekend of JayCon X, my tenth annual 37th birthday party [ jlake.com | LiveJournal ]. So another big psychological lift, but only beginning to crawl from the wreckage physically.

Meanwhile, the recovery timelines will unfold at their own pace. Immune system bounceback will come in fairly short order, as I've never really crashed out my blood chemistry. Fatigue bounceback will unfold in July, though I won't be surprised if I have issues for months to come. I'm told to assume body toxicity for three months, so that's September. I have no idea how the cognitive stuff will reset, but I'm hoping for fairly swiftly once we stop pumping drugs into me. As for peripheral neuropathy, anything up to two years or possibly permanent. And lower GI has been strange ever since the colon surgery in 2008, so I do not know what recovery curve to expect there. Most importantly, my writing brain, which is already hammering at me, and just wants enough energy to express itself. So that recovery probably ties in with the fatigue bounceback.

All of this gives a very elastic definition of "over" as in "Hey, chemo is over!" And in a sense, it will never be over. It's not like I get to walk away from cancer. Every three months for a CT scan, all the other followups.

So I'll be eager and excited next Sunday afternoon. And I'm just as likely to do a faceplant as anything else. I must guard against frustration and even anger as the days flow by and I'm not immediately my old self. I know better, I really do, but this will be the long, slow "hello" to normalcy, which will return not like the sweeping tide, but like the summer rain, one drop at a time.