Reading Recommendation: The Specific Gravity of Grief — Brenda Cooper with a review.

Spring thaw on the North Slope — I have seen these Arctic meltwater lakes from the air and from the ground when I visited Barrow a few years ago, and they are very curious. The land looked like a gaming board.

Banished by the FBI — American citizen trapped overseas on the no-fly list. Civil liberties 'r us. (Via

How to Prevent Language Extinction — Offer not valid in Arizona or within 1,000 yards of Sarah Palin.

Are the Ten Commandments really the basis for our laws? — Some analysis of a cherished Republican talking point. (Thanks to

Psychoanalysis of a Republican — Political humor. He, to list but a few examples, rails against government while lauding the Medicare that pays for his sessions; believes the government to be simultaneously incapable of any competent action and yet skilled enough to remake a foreign country or stop a gushing oil well a mile beneath the ocean's surface; insists that the President is alternately the dupe of foreign countries and the mastermind of a vast globalist conspiracy. When these contradictions are brought to his attention, patient reverts to hostile accusations of bias directed against the therapist or he changes the subject.

Rand Paul's ideas crash into reality — The Lexington Herald-Leader editorializes on home boy Rand Paul. At the the junction of principle and pragmatism, Paul denounces big government and its costs and intrusiveness, but depends on the little things that big government does for him.

?otD: Does the paper holds your folded face to the floor? 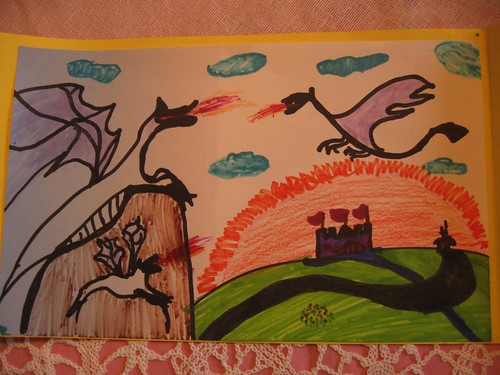 This work by B. Lake and Joseph E. Lake, Jr. is licensed under a Creative Commons Attribution-Noncommercial-Share Alike 3.0 United States License.

I swear, it's always something new. And usually unpleasant. Just in the past few weeks, my fingernails have begun to split on almost a daily basis. I'm talking snags and small cracks in the end of the nail, as anyone might get occasionally. They're also thinner, as evidenced by the reduced amount of pressure required to clip them. It might be my imagination, but their quick seems to have more ridges than they used to.

Uneasy dreams last night, mostly about awkward, failed teen-style attempts at sex, and travel frustrations. Imagine Planes, Trains and Automobiles combined with American Pie, except there was never this one time at band camp. Ah, to have a life of the mind.

shelly_rae arrives tonight. We get the needle set today, and my blood chemistry done. Tomorrow is infusion session twelve of twelve. I'll be bringing copies of The Specific Gravity of Grief to give to my oncologist and to the infusion center's reading library.

This is the last time I go in for the FOLFOX/Avastin cocktail. It seems both a trivial moment and a huge one. My (step)mom,

the_child and The Niece are baking today, so I can bring the family's traditional chocolate cake in as a thank you to the people at the infusion center. Then, well, life begins to change again.

Speaking of life changes, I direct your attention to this conversation between

We all change, then we change some more. I could just do without the medical drama.

One of the things that continually pops up in political discourse is false equivalency. "[X] was bad, but both sides do it." The media does it, presumably in an attempt to present balanced stories. Extremists on both the Right and the (American mainstream version of) the Left do it, to justify their own rhetoric and behaviors. Centrists and independents do it as an expression of frustration, or a justification for not getting involved.

You see this especially in the problem of incivility and destructive rhetoric.

But the equivalency here is false. Remember the outrage in the media over a Bush-Hitler video in the MoveOn contest some years ago? Republicans in Congress grandstanded against one anonymous contributor somewhere out of thousands. We were told this poisoned the process, this was typical of the left. Yet during the Obama administration, leading Republican political figures have routinely compared Obama to Hitler and his policies to Nazism, without a hint of protest from the media or the public.

This ties back to Newt Gingrich's GOPAC memo of 1994, and conservative pollster Frank Luntz's ongoing updates of keywords for Republican use. Likewise the widespread use of eliminationist rhetoric in the Right wing commentariat and the edgier fringes of conservative political establishment.

There simply is no Democratic equivalent of the GOPAC memo or Luntz's word lists. There is no Left wing commentariat with even a fraction of the audience and market share of Limbaugh, Beck, et alia, and such as they are, Maddow and so on, they do not engage in eliminationist rhetoric directed at the Right.

To say that "both sides do it" with respect to political incivility and calls for violence, intimidation and other forms of rhetorical attack is both untrue and ignores the specific, well-documented facts on the ground. One of the many reasons I'm a committed liberal-progressive is that I find the rhetorical tactics of the Right distressing and often disgusting. Even if they have something to say I might want to hear, it's so often cloaked in a combination of aggressiveness and dismissiveness that closes my mind.

If you think I'm wrong, show me. Show me how conservatives have stood up and challenged the use of Nazi rhetoric to refer to Obama to the same degree they challenged the MoveOn video. Show me where the Democratic equivalent of the GOPAC memo is, and who uses it. Show me liberal talk show hosts with Limbaugh's ratings, Beck's attitude, who use eliminationist rhetoric to delegitimize the right.

Because so far as I can tell, the current poisonous climate of political discourse has been deliberate fostered by the Republican Party and their media proxies since at least 1994 in an attempt to energize their political base and polarize the sought-after undecided center. I don't see good faith, or meaningful rhetoric about policy, politics and process. I see highly organized nastiness directed at a large segment of American society, an attempt to separate "Real America" from the rest of us. Yes, there's always some leftie nut saying outrageous things, but those people don't host major talk shows or hold national elective office, unlike the lengthy list of conservatives who say outrageous things.

Where am I wrong?
Collapse