Scrivener's Error is sensible on protecting your ideas — A lot of paranoia occasionally erupts on this topic. Worth the read.

Housing, Superbugs, and Mosquitoes — MG Ellington on low-end, critical futurism, at Science In My Fiction.

Brown Dwarf Planets and Habitability — Centauri Dreams with more on one of my favorite astronomy topics, especially as this relates closely to Sunspin. I especially like the note about temperature and intelligence.

Inferior Blood — If it's OK to reject blood from gay men, what about blacks? (Thanks to

The Argument over Aging — Can a drug extend good health and postpone the effects of aging? Anagathics don't help me much if cancer doesn't let me live to be old.

Islands of Four Mountains from Above — APOD with an eerie, alien-like image of four Alaskan volcanoes.

The Speedway: 1905 — New York City, with the least amount of traffic you will ever see. (Via Shorpy, of course.)

Staying Off The Bandwagon — Conservative commentator Daniel Larison on rhetoric, among other things. ...outrage is no substitute for good judgment and critical thinking and that the impulse to score quick, emotionally satisfying victories at expense of unsympathetic, relatively weaker parties frequently leads to terrible abuses and errors.

ACLU chief 'disgusted' with Obama — Yep. We wanted better, not more of the same. If I preferred abusive security policies, runaway deficits, extraconstitutionalism, uncontrolled power and a unitary executive, I'd be a Republican. That's what we got the last time they were in power, that's what we tried to get rid of.

?otD: How many mountains have you climbed? 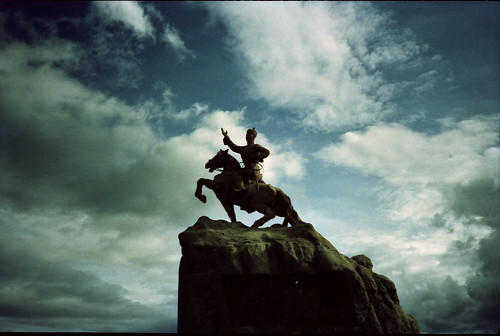 Coming down is hard. My body continues with the usual sleep issues and GI fail, as always after an infusion. Tears are close, and have flowed a few times, once heavily. I am wrestling the fear of additional mets into place as I make appointments for CT scan, oncology followup, colonoscopy and related followup, dental cleaning, et cetera. Plus a little growth on my ankle which probably has nothing to do with anything, but these are medically paranoid times for me.

Underneath it all my attitude is good, as always, but you couldn't tell it from my affect today.