A review of several books, including Mainspring and Escapement — Good stuff.

Lifesaving drugs may be killing health workers — A darker side to chemotherapy. (Via

The pool at Marina Bay Sands Hotel in Singapore — Um, no. (Thanks to

Adolfo Farsari – The Man Who Shot Old Japan — This is fascinating. Photos from 19th century Japan. (Indirectly via

Seeing Infrared in Maps — Infrared imagery in online maps lets homeowners see their energy efficiency. This is kind of cool.

Online, We Pay With Our Time Spent Searching — An interesting look at time/value calculations for our leisure and entertainment efforts. (Thanks to my dad.)

The third Bush term — The Edge of the American West on where Obama continues to fail those of us who believed in him. Not just environmental policy, but the war, Guantanamo, civil liberties — a wide array of that peculiar Bush-era admixture of idiocy and evil continues to be propagated by the man we elected to reverse the damage.

?otD: What's your word for world? 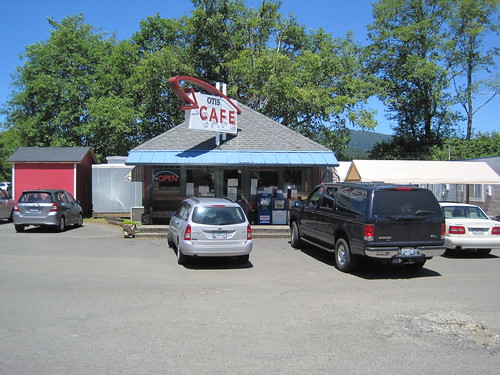 Otis Cafe, Otis, OR. © 2010, Gary A. Emenitove. All rights reserved, reproduced with permission.

It's funny what I'm afraid of and not afraid of. Surgery followed by six months of chemotherapy gave me a lot of negative experiences and emotions, but it didn't make me very afraid. Don't get me wrong, I had a lot of fears through that period, including my recurring fear that I'm dying, or that I'd never be myself again after chemo. But not the mind-numbing, nigh hysterical panic that I call "the Fear".

That one seems to be reserved for times of uncertainty. Like, say, when I have a CT scan imminent (this coming Friday) to see if there are further metastatic tumors that chemo did not put down. Or an oncology consult (next Monday) to discuss said CT scan. And for some reason, I tend to focus on the scans as the frightening part, when in fact all you do is go into a little room and lie still for while as a machine makes funny noises. A CT scan is kind of like bad sex — a brief, boring, pointless time spent horizontal, wondering what the heck you're doing there.

You'd think the oncology consult would be the panic point, since that's where the truth is sung. But no, me, I get hung up on the tech. I'm not having the Fear today, or at least right now, but I can hear it sniffing around in the psychic distance.

I want to be clean. If I have to face surgery again, that won't weird me out too much, because surgery is a one-time event that you then get over. But if I have to face chemo again... ah. You will see some true rage and panic from me.

There's a lot of emotion driving me into this Friday's test. And it's a test, as well as an emotional pinchpoint, that I'll have to go through every three months, possibly for years.

Sometimes I wish I was stronger.

I'm going to say something here that I've said before, specifically about myself: It is possible to write too fast. Speed in writing is not inherently a virtue. As writers, a great many of us track word counts, and can readily get hung up on them. This is sensible enough, in that word counts are one of the few nominally objective metrics of progress which are within our control as writers. That and submittals.

But not all word counts are created equal. For a writer who is a multiple pass reviser, the first draft word count may be almost irrelevant. For a writer who's a write-and-send type, the first draft word count may be just about all there is. In my case, my first drafts tend to read like other people's second or third drafts. One of my truly great gifts as a writer is a very active subconscious ("Fred") who does an enormous amount of pre-writing for me somewhere deep in my head, working out things offstage that some writers have to work out on the page.

Which is not to say my first drafts are perfected instances of the story-teller's art. In many cases, especially novels, they are very far from it. (Just ask

casacorona, who has to edit me, or

calendula_witch, who reads it all fresh off the griddle.) It does mean I write clean copy that's usually not terribly difficult to fix. And I tend to do it swiftly, which is another great writerly gift.

The true struggle of my writerly career, my personal maturation challenge, has been to slow the heck down as I write. Because I am quite capable of slamming through 2,500+ words per hour. For hours on end. (I once calculated my theoretical maximum drafting rate, based on my typing speed, as being 4,000 words per hour. I believe I've hit 3,400-3,500 words per hour once or twice.) And it's pretty clean copy (see above) and can be pretty good prose.

Fast writing is not bad writing. But it's not the best writing. Because while I can keep a pretty clean, crisp skin on prose churned out that quickly, the story bones don't necessarily have time to set correctly. Some pieces of story require deliberation, even when Fred is all over it behind the scenes. A project of the few years before cancer swallowed me up in 2008 was reducing my draft throughput speed. I worked to get it down to around 1,800 words per hour, which is apparently about as slowly as I can move without falling over. (Imagine trying to ride a bicycle very slowly.) Much slower than that and it all just stops working. Combine a slower drafting speed with an increasing focus on revision as I move through my career, and the quality of output increases, at least in theory.

Another exception is right now. Thanks to chemotherapy, I'm coming off a silent period a little over two months long, which is the longest period of time I've gone Not Writing in at least the past decade. It's made me crazy. Story, both in specific and as a Platonic ideal, has been boiling in my head for the last several weeks. A lot of pent-up energy is trying to get out through my fingertips. Furthermore, I have two major deadlines (Sekrit Projekt and Endurance revisions) in the next six weeks, both which are already postponed due to cancer and its discontents. I must move swiftly to meet my commitments.

So now is when I trust to the same speed I've been working for years to moderate, and trust to my experience as a writer not to make the speed-mistakes I used to so blithely gloss over. Also, trust

casacorona. Because for the next five or six weeks, I am required to move very, very quickly. Luckily, speed has always been one of my gifts. Perhaps by now slowness has taught me sufficient wisdom to make speed my servant instead of my master.