7 Wonders of the RV World — Americana at its finest. (Via

The Lizard, the Catacombs, and the Clock: The Story of Paris’s Most Secret Underground Society — (Via

The American Aristocracy — On the repeal of the estate tax. Remember when the GOP was on and on about how family farms could be lost to the "death tax", and Farm Bureau couldn't find a single example of that happening? Yes, this is definitely another conservative win for the little guy.

GOP Reps Align with Muslim Nations Against Gay NGO — Wait, I thought the GOP tells us Muslims are the enemy? Anything to stop teh gay, I guess. How these people can sleep at night is beyond me. 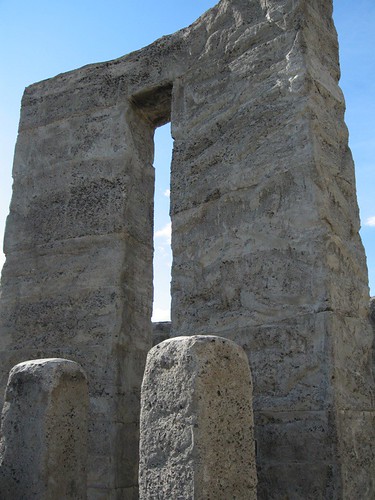 Well, the PET scan result yesterday was confusing. On Monday, when we met with the oncologist, she was quite convinced this was a metastasis. My oncologist is not an excitable person, she always hedges. This time she didn't. Then the PET on Tuesday showed the growth in my liver failing to exhibit the high level of metabolic activity associated with tumors.

A few things I know, or reasonably assume here.

Once I get a consult with the liver surgeon, I'll know more, but my current understanding is that we'll go ahead with the surgery, then rely on the biopsy to guide what comes next. I find it improbable this is not a metastasis, but the evidence is showing mixed.

Weirdly, in some ways this new ambiguity is more upsetting to me than simply being on the path to another round of surgery and chemo has been. That says a lot more about the quirks of my psychology than it does about medical science.

calendula_witch and I spent quite a bit of time yesterday discussing the implications of all this. I am feeling very vulnerable, all too aware of my own mortality. If this proves out to be a met (which is still my belief), my survival odds have taken another nose dive. They're already pretty spooky, but I do understand the difference between statistics and prognosis.

My fear — and here I am talking about emotional reactions, not logic or sound medical judgment on anyone's part, least of all mine — is that this cancer will continue to be aggressive, and throw mets faster than we can treat them with surgery and chemo; that I'll spend the next few years grinding myself to pieces trying to catch up to something that's killing me slightly faster then we can cure it; that I'll become too sick to work, too sick to write, and within a few years, too sick to go on living.

I recognize I've had all of this news less than forty-eight hours, and mental/emotional whiplash twice already, once with the Monday consult and again with the PET result. This is no time for me to be drawing firm conclusions or making major decisions. Yet the New Zealand/Australia trip impends, Endurance is due, my life hurtles onward, and everything is inflected by this problem.

Ugly mysteries, life and death stakes, colliding schedules and commitments. If I were a character in a book, this would be fascinating. Living through it, not so much...

Good thing I'm seeing my therapist today. Gee, I wonder if we'll have enough to talk about?

calendula_witch and I are off to Writer's Weekend tomorrow, whereat I am pro'ing with

davidlevine. A cast of dozens — well, about two dozen — will be there at a resort in the Olympics, but no longer the Iron Springs of memory. (For those newish to the blog,

calendula_witch and I met at this workshop two years ago.) I'll also be putting in some serious spadework on Endurance revisions.

We'll be back in Portlandia Sunday evening. Monday I am off to Omaha, my first such trip since last October. I'll fly back from Omaha to Seattle on Friday the 30th, to attend the Clarion Party there that night. Home on the 31st, then off to New Jersey on August 4th.

Once I get back from all that, I will see the liver surgeon on August 11th. After that, quien sabe? (Except for continued Endurance revisions, of course.)

If you're playing along with the home game version of "Where's Jay?", this update should suffice for now.