The Rookery: 1938 — Some serious story telling embedded in this Shorpy photo.

The danger of safety — All of which reminds me of why I gave up using radar detectors many years ago. (Via

Boeing's New Crew Spacecraft — The company wants to be the first from the private sector to build a human-rated capsule.

Senator Lies About Roommate — I don't get this argument that extending unemployment benefits prevents people from taking jobs. The only people who could possibly think unemployment benefits incentivize the unemployed to remain jobless are those who have never tried to survive on the very meager funds paid out. Or idiots. Or both. It's a deeply specious argument made from the ignorance of privilege and some very flawed assumptions about the working class and the poor.

I'm Telling You, Palin Has No Chance — Conservative commentator Daniel Larison on Palin in 2012. We have already given one obviously unqualified Western governor a chance to wreck the country in the last decade, and not even the Republican Party that continues to defend and like Bush is so clueless and self-destructive that it would go to the country with a female version of the disaster we just experienced

?otD: How hot is it where you are today? 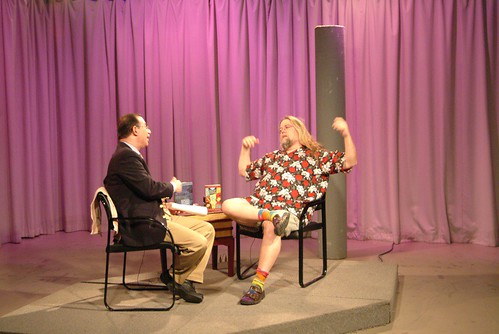 Me being interviewed for Fast Forward TV at the Channel 69 studios in Washington, DC. © 2006, 2010, M. Lake. All rights reserved, reproduced with permission.

At Writer's Weekend in Moclips, WA. There's Internet access here, slow but existent, if you happen to be in the right part of the right room facing in the right direction. No phone, though. So expect very limited blogging and email while I'm off doing critique, walking on the beach and hanging with my writer homies.