Generating Power from Electricity in the Air — A researcher describes a potential new source of renewable energy. This is nicely SFnal.

Poul Anderson's Answer to Fermi — Centauri Dreams on one of my favorite topics.

Penn and Teller take on vaccines — Antivaxers are endangering their children and everyone else's. Period.

'The Illustrated Man' — Obama's enemies have painted him as an alien threat. Can he fight the flight from facts? But fact-free outrage is so much more fun!

?otD: Where does your electricity come from?

Your Monday/Tuesday moment of zen. 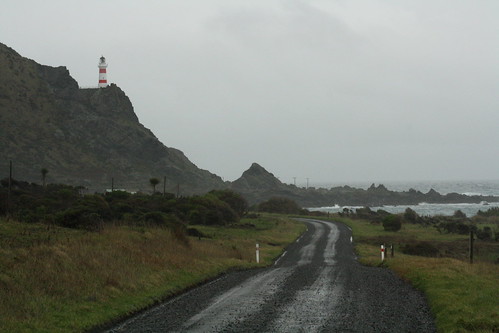 calendula_witch hath promised, here is a post about sheep, seals and bulldozers. Oh, my.

Yesterday the four of us headed out in

khaybee's state limo (a surplus stretch Volvo S90 retired from diplomatic service) and drove from Wellington to Cape Palliser. The trip went via the very winding, tiny Highway 2 through the Rimutakas, then into the charming town of Featherston, then to Greytown, where rugs and chocolate were purchased. From Greytown we drove to Martinborough for lunch, then on out Cape Palliser Road to Ngawi and then to the cape itself. The route, for them what is interested.

We saw a lot of beautiful countryside. Early flowers are in bloom, including daffodils, kowhai trees, and down by the coast, enormous lupens. The weather was increasingly gloomy as we progressed, but we always had good visibility. The road was increasingly grim as we progressed, but the state limo kept up to the bitter end. And it was beautiful. The Wairarapa Valley reminded me rather a lot of the Willamette Valley back in Oregon, but they're at roughly the corresponding latitude, with similar rainfall and weather patterns, so this is unsurprising. The coast looked a bit like the Mendocino coast in California, except with more dramatic irruptions of volcanic rocks.

There were sheep. Lots of sheep. (I think I took about a hundred pictures of sheep.) 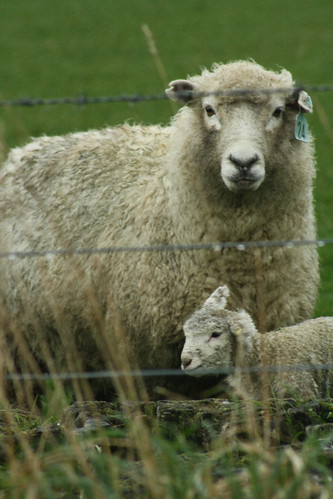 The lambs had just come in. Some were still orange with their afterbirth. Others staggered around in a state of surprise and wonderment. Others were dead, stillborn or weather-struck, providing a feast for the hawks.

Later, as we got to Ngawi, we saw a rare coastal bulldozer colony. (I took about hundred pictures there, too.) 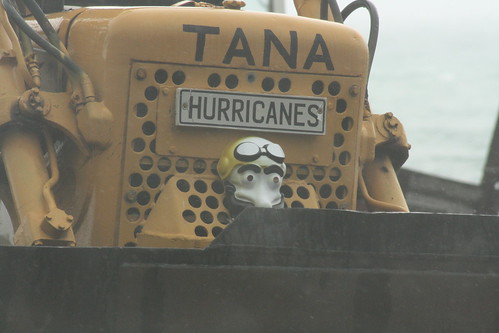 Ngawi is a fishing village without a harbor, just a beach. When the boats come it, they're set on handbuilt trailers and hauled up the beach by bulldozers. This is lieu of a launch ramp, or a jetty and moorage. Several dozen bulldozers line the road, each hooked to a largish fishing boat. Some of them are seriously antique, others quite modern. It's a very curious sight, and an interesting solution to the obvious problem of protecting the boats from the chronically rough seas there.

Finally, on the last stretch of the road — one lane of gravel and mud — we saw the permanent colony of fur seals that live around Cape Palliser. (I took about a hundred pictures of seals as well.) 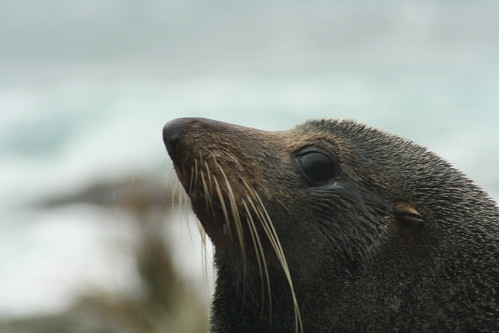 These are big seals, rather larger than the harbor seals I'm familiar with. It was a rainy day so a lot of them were up on the grass by the road, above the rocky beach. They were also quite indifferent to our presence. When I got out of the car and walked around with the camera several times, I was sharing their immediate space. Mostly I got a yawn and a blink. Things might have been different if I were wearing a coat made of fish or something.

It was a beautiful drive. We got to see a lovely slice of New Zealand, and some unusual things. Plus a long, fun day in the car. Today we lay a bit lower. Tomorrow we are off to Melbourne, Australia.

Also, due to bandwidth limitations here, I can't upload the bulk of my photos yet. Watch for photo essays on sheep, seals and bulldozers to come.