Best SF reviews my story "Permanent Fatal Errors" — It's from the Sunspin cycle, and appears in Is Anybody Out There?.

Blind Prejudice — An interesting squib from Bad Science on judging by appearance.

Where Dams Once Stood, Prospectors Spur Anger — Panning for gold... (Thanks to Dad.)

The Hunt For Liberaltarian Candidates — Socially liberal? Fiscally conservative? Too bad for you!

Your Saturday/Sunday moment of zen. 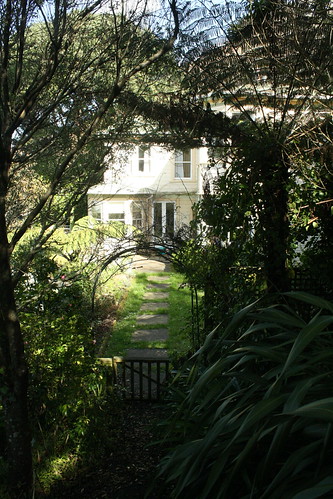 House, Wellington, NZ, near where

Another good day yesterday. Had a panel on steampunk that went well, then a signing next to George R.R. Martin. See this hilarious photo. I have no idea what was actually going on in that moment, but I look like I'm in extreme pain.

dinogrl, then back to the hotel for my usual nap. (Sigh.) We hied off to the bar, then to a rather curious dinner in good company, including several Not Usual suspects (

carolryles and A.A.A.). Strange stories were told concerning long pig franchises, carnival junk yards and fatal pornography fires, among other thing, Moreton Bay bugs were eaten (though not by me!), I had an odd food reaction that featured undulating floors and a vanishing South Asian gentleman, then

danjite got the entire meal comped.

Back at the bar things turned into something of a who's who of speculative fiction, but I turned into a pumpkin and headed for a long night's sleep, leaving

calendula_witch to hold down our partying responsibilities.

Today a panel on what comes after steampunk, then the Hugos with all they entail. Will be a difficult but fun evening for me, methinks.
Collapse