Testing, the Chinese Way — (Via

Family win $1.5 million in autism-vaccine payout — If you read this story carefully, there seems to be a legitimate thread of science in it given that a rare genetic disorder is involved, but the anti-vaxers are going to run hard with this as if it were applicable across the general population.

Anthropology and Changing Myths vs. "Eternal" Scripture — Ah, Truth as an absolute. So much of the world would be so much more peaceful if people could let of that conviction. (Via

Tom Ross, Delaware GOP Chair, Threatened With 'Bullet In The Head' — Once more we hear the reasonable, measured tones of conservative rhetoric at work.

Newt Gingrich Is So Off, He's Not Even Wrong — This story in regard to Gingrich's bizarre remarks about Obama's alleged African socialism. Of course, the headline is generally applicable, along the lines of "Sun rises in east." More on this from Ta-Nehisi Coates, examining the underlying assumptions.

Intolerance — Park51 and Islam in America, as we betray our own values.

The Talibanization of America — Viewed from Pakistan, the rise of U.S. Islamophobia looks depressingly familiar. Another wonderful gift from your Republican Party and the American conservative movement.

?otD: Have you been taught how to play Monopoly and how to sing in the rain? 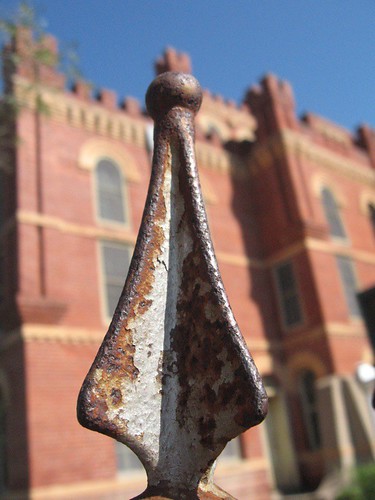 Just a mile or two past Ngawi, we came upon the seal colony that lives on and around Cape Palliser. This are fur seals, much larger than the harbor seals I'm used to seeing — the bulls were nearly the size of sea lions, or so it seemed.

The day was still cloudy and wet, which meant they were up on the grass by the road. (Understand at this point the road is a rutted track meandering close to the rocky shore.) Apparently sometimes cattle graze down by the ocean, and the seals and cows can be seen together. Sadly, we were not treated to this vision of bucolic utopia. I will observe that the dozing seals were supremely indifferent to our presence, to the point of being virtually comatose. This even though I could have reached out and touched them.

"The definition of insanity is doing the same thing over and over and expecting different results."
— Rita Mae Brown (often misattributed to Albert Einstein)

Doing the same thing over and over and expecting different results is also the definition of parenting. Kids don't learn on a smooth curve, they progress in stairsteps. The same child that acts out in a restaurant or has a candy tantrum at the grocery store will eventually stop, if you work hard to deal with those problems. In the mean time, you still go to restaurants and grocery stores because that's part of life. Each time expecting a different result, regardless of prior experience.

Eventually you get a different result. That's called growth.

Building a writing career works pretty much the same way. Otherwise none of us would survive our first handful of rejections. I had over three hundred before I sold a single story. Was I insane to keep sending out, and expecting a result different from continued rejection? Apparently not, though since that first sale I've had almost fifteen hundred more rejections, and almost three hundred acceptances.

Unless you're one of those rare people who can explicitly and consciously self-direct your learning processes (I'm certainly not, and off the top of my head I can only name one person who is), almost everything about professional fiction writing, especially in the pre-published and early-career phases, seems to fall under this rubric. You write drafts with flawed characters, critiquers and editors point this out to you, so you write more drafts with more flawed characters. Then one day you write a good draft where the characterization is solid. Your next handful are wobbly, then you get another good one. About then, the feedback you get shifts to complaints about your endings.

Developing as a writer is a game of pound-the-peg. And the peg-pounding part is a process of repetition with expectation of change. My advice? Be insane, just be insane with feedback and effort at self-improvement.

1,700 words on "The Decaying Mansions of Memory", a novelette for a Sekrit Projekt. Written in a florid style which is entertaining me greatly. We shall see what the editor thinks... I may have to write some splatterpunk or nurse romance or something to clear my palate once I'm done with this. Moving a tad slower than usual through this draft, but that's ok. Words is words.