Big old pile of reviews of my work — At Fantasy Literature.

That Jay Lake Fellow — A very nice plug from Lawrence M. Schoen for The Sky That Wraps.

Genre writers on their own works — I am included in SF Signal's latest Mind Meld.

The church and homosexuality — My friend

daveraines asks about LGBT experiences of Christians. This one's worth commenting on, I think, if you have something to say about this.

Mandates and Moral Calculus — Ta-Nehisi Coates with some interesting thoughts on the Tennessee fire story. (See also the substantial comment thread on this topic in yesterday's link salad.)

Cantor On Gov Shutdown: 'We Don't Want To Be Seen As A Bunch Of Yahoos' — Wow. Self-awareness from the GOP leadership. What's next? World peace?

?otD: What's your favorite story of yours? Or mine? 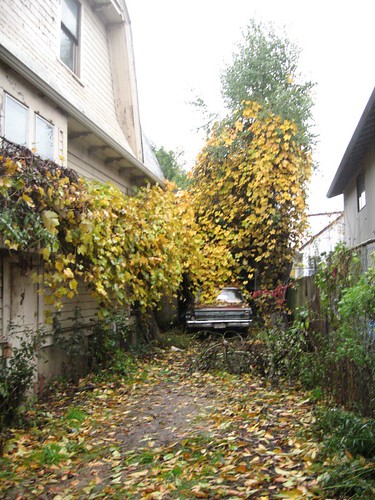 The day after the Great Ocean Road tour, we met up with a passel of folks under the guidance of

australianjoe for a day long tour of Melbourne. As two in our party with mobility-impaired, Our Host had worked out a route that included plentiful tram hops and many rest stops.

Our first destination was the National Gallery of Victoria. We weren't there for the art, but for the architecture.

The voting poll for the current caption contest is now open here. Prize is an inscribed copy of my new collection from Subterranean Press, The Sky That Wraps. Go give 'em a look!

I'm pleased to announce that on November 16th, Audible.com will release METAtropolis: Cascadia. This is the sequel to METAtropolis, was nominated for both the Hugo Award and the Audie Award (the top honor in the audiobook industry), as well as being published in print by both Subterranean Press and Tor.

This project was edited by me, with work from five other very fine writers. The intention was to focus on just one of the regions covered in the original METAtropolis. This audio anthology deals with the Pacific Northwest, and the successors to Cascadiopolis, subject of my story in the original volume, "In the Forests of the Night." My own story is a direct sequel, some forty years after the first piece, which explores the direct consequences of the fate of Cascadiopolis. The others take different directions into this same future.


Here's the blurb for the anthology:

As the mid-21st Century approaches, the Pacific Northwest has been transformed — politically, economically, and ecologically — into the new reality of Cascadia. Conspiracies and secrets threaten the tenuous threads of society. The End of Days seems nearer than ever. And the legend of the mysterious Tygre Tygre looms large.