Peer Review — An archaeologist discusses the process. In some ways very similar to how fiction manuscripts are vetted. (Via

Fresno court case alarms wrestling community — Controversy over 'butt drag' could further damage sport's fragile reputation. I can't decide if this is funny, or tragic, or what. 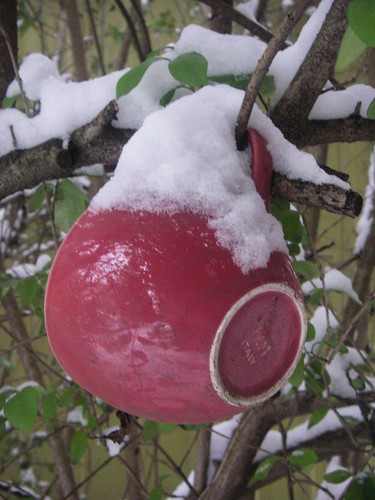 I went for a two-hour pre-dawn walk along the beach this morning. This had its own challenges, ranging from not tripping over ducks and rabbits, to keeping an eye for sneaker waves (they kill a few people almost every year here in the Pacific Northwest), to noting the progress of the tide, to well, walking in the nearly pitch dark. Still, there is something profoundly calming about the breaking of waves, their foam fingers a gray gleam in the deeper darkness of the oceanic night.

I've found things on the seashore before. Right here on the Oregon coast, I once found a diamond ring rolling in the water's thinnest edge as the ocean encroached upon the beach. Sea shells, love, lucky rocks, forgiveness, dead seals, inspiration, the green flash at sunset... Eventually everything in life comes to this margin between land, sea and sky.

This morning I found a measure of acceptance.

Acceptance is something I'm not especially good at. That same psychotic persistence that I have oh-so-successfully applied in my writing career manifests as a sort of manic attack on problems. Viz my turbulent journey thus far through cancer. Not that I indulge in denial. My lack of acceptance rather expresses itself in new forms of resistance. Or attack. In never letting go.

Hearts are like the sea. Boundless, layered, benthically deep, ever restless, especially in their intersections with the world and with other hearts. You can bring yourself or someone you love to the sea and give it to them. But you cannot take the sea. It cannot be grasped in your hand, or pockets, or taken by storm or siege or subtle subterfuge. It just is.

Neither can you take a heart. It can only be given. Freely and with joy. And sometimes, love is not enough. No matter how much you love.

So I walked in the dark, between my heart and the sea. The ocean had no new wisdoms for me, only its same old, slow-rolling thoughts. My footing was treacherous and my eyes made tears faster than the wind could pluck them away. And at least for a while, I let go of everything but my love.

Acceptance is much more difficult than fighting on.

I went out a while today with a couple of cameras in search of scenic, which is hardly in short supply here on the Oregon Coast. Unfortunately, a rather odd combination of high wind, extremely heavy rain, and fog (yes, all at the same time) made this an impractical goal. I gave up at Nehalem and headed back up the coast. However, between Nehalem and Manzanita, I did manage to come across some amusing signs. 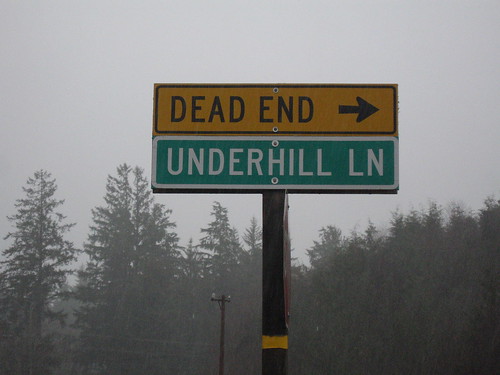 From the Department of Unfortunate Juxtapositions 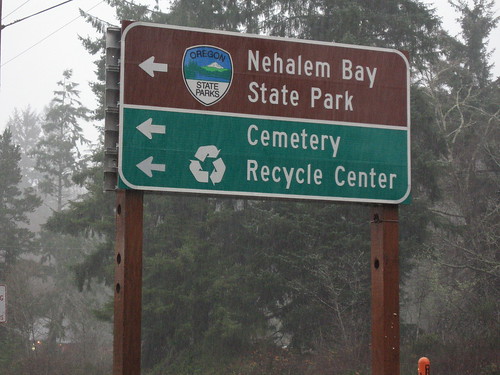 Just up the road from the previous sign, those lower two are a pairing that begs some significant questions 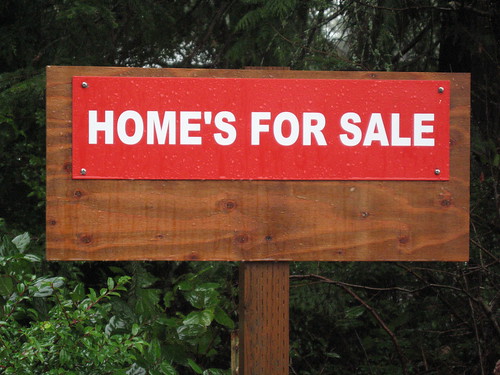 I swear this went through Link Salad in the last year or two, but I cannot run it down.

Is there a stable configuration for extremely long-term orbits (millennia or more) for artificial satellites? I recall reading that at least one satellite has been placed in such an orbit. I'm trying to sort out if that's true, and if so, is there a name for such an orbit?

Why, yes, this is rocket science.