A 1944 Christmas miracle for Gen. Patton — The World War II general's holiday greeting to troops in Europe that winter included a prayer entreating God to end the rains that were bogging down the United States' 3rd Army. Interesting and vaguely weird bit of cultural and military history.

What a gay Marine taught me — A little note for all the bigots and fools on the conservative side of DADT.

?otD: Does the fighter still remain? 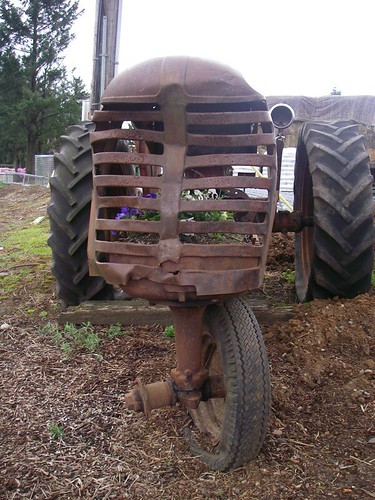 Last night, I finished reading Riddley Walker by Russell Hoban (1980) [ Powell's ]. Brighter minds than mine have spent much thought on this book over the years [ Wikipedia | Riddley Walker Annotations ], but oddly enough I still have a few things to say.

This book could be a type specimen in the argument Daniel Abraham was exploring just yesterday about the dynamic tension between sentence and story. One could write a perfectly decent bit of post-apocalyptic science fiction about the recovery of lost knowledge and the dynamics of social and technological power using the plot, characters and setting of Riddley Walker. That's not what Hoban did. He wrote a puzzle story, where the puzzle is in the framing, phrasing and vocabulary of the story — a technique for example much deployed by Gene Wolfe among others, but Hoban takes it to a grand scale. That layer of linguistic manipulation completely shifts the book away from the underlying story it tells and pushes it into another sphere entirely.

Riddley Walker is written in a mode very reminiscent of eye dialect. In point of fact, this is not eye dialect, in the sense that the narrator is explicitly writing things down rather than having his speech quoted. He lives in a world that barely has orthography, let alone dictionaries. Spelling is remarkably eccentric, yet largely phonetic. The sense of the culture that comes through Riddley's word choices, and the reader's efforts at comprehending how the meanings have shifted, is a huge part of the experience of the book.

Science fiction writers especially use linguistic evolution as a story telling and worldbuilding tool, but most of us don't do it with every damned word on the page. This is impressive, and challenging. To say the least.

One thing I struggled with was sorting out which of the linguistic transformations were literary devices of the book, and which were my own misunderstandings of the substrate of English culture embedded in the story. For example, it took me quite a while to recognize that "Pry Mincer" was a corruption of "Prime Minister", and I didn't grok the connection between the Eusa shows and Punch-and-Judy until that was explicitly stated fairly well along in the book. This is not a complaint, just an observation. And in fact, it's that selfsame lexical detective work that makes the book both so much fun and so much work. Sorting out the subtle expansions of meaning in the words "hevvy" ("heavy") and "foller" ("follow"), for example, occupied me considerably.

My best advice, swiped from

tillyjane (a/k/a my mom) is to read it aloud. Much like Huckleberry Finn, this book makes more sense that way. Though I never did figure out what "sarvering" meant in the phrase "sarvering gallack seas and flaming nebyul eye". (The Internet has since informed me that "sarvering" means "sovereign", but I'm not sure that makes much sense, either.)

At any rate, you will likely either love or hate this book. I don't see much room for ambiguity. Enjoy.

Another day with hours spent in the trenches of the Sunspin outline. If writing a short story is like spitting watermelon seeds, and writing a standalone novel is like biting off chunks of watermelon and spitting them out one at a time, I have to say working on this monster is like trying to barf out an entire watermelon at once, whole.

I've tried several approaches to actually hanging a plot on the fabric of the outline, which is largely dozens of pages of worldbuilding and continuity notes. This morning I finally hit what I wanted. I then promptly hied off to see Black Swan at the cinema, about which more anon. On returning, I broke out the whiteboard again to work through the implications of tracking characters across settings. I'm not having too much trouble managing everyone's agendas so far, but figuring out who is where when was getting dicey.

That produced a whiteboard that looked something like the flight of the bumblebee as rendered by a drunken John Venn. 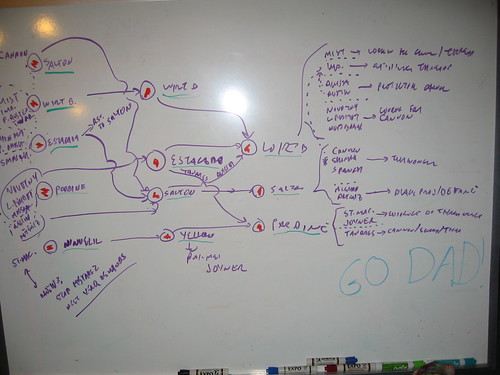 Drawing on my most recent whiteboarding experience, I promptly set about cleaning up the mess in an electronic file using the Drawing function of Google Docs. This created its own information management problems.

the_child was moved to critique my visualizations, offering several cogent and useful suggestions which I incorporated. She also continues to ask excellent questions about deep background and character motivation. It's sort of weird, brainstorming high concept space opera with a thirteen-year-old, but she's pretty good at this.

My favorite bit was when I realized I'd had two characters appear in the narrative's midstream without knowing where they'd come from, in an astrographic sense. The following exchange ensued:

jaylake: "Where do they come from? Some other planet. I can't call it 'Some Other Planet."

the_child: "Just use a different language."

No wonder I keep this kid around.

Anyway, I seem to have the first third of the trilogy (Calamity of So Long a Life) diagrammed. This diagram itself broken down into something like a three-act structure. I now need to go back to my plot narrative, which only covers the first act of this visualization, and follow the structure I've laid out to the breakpoint between books one and two.

I will also observe once again that Fred is a heck of a lot smarter than I am...