A hilarious and decidedly NSFW conversation with

alumiere asks how do you know her — Interesting question. How do you know me? Through the blog? Reading my fiction? Have we met in real life? When and how?

The Museum of Scientifically Accurate Fabric Brain Art — As featured in Science, Knitting Help, and the National Review. From here in Oregon, no less. (Via MH.)

Former Spy With Agenda Operates a Private C.I.A. — Hmmm. (Thanks to my Dad.)

?otD: Really, why did you eat that? 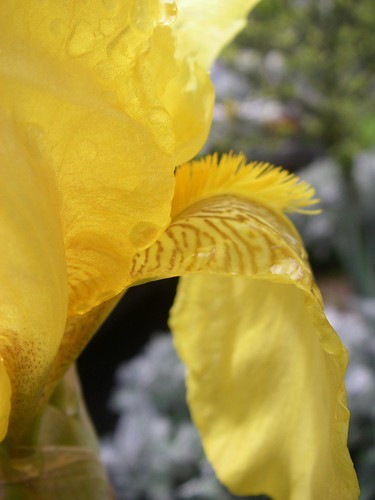 Yesterday I attended the Portland Chocolate Fest with a small, assorted rogue's gallery of local high tech ne'er-do-wells. It was quite something. I ate myself very nearly sick on samples, and had a lot of fun.

Highlights including sampling the "Don't Eat This Chocolate" hot chili chocolate bar, from a chocolatier who told me that adding bacon to his blue cheese truffles was over the top; checking out the truffle woman; and eating some righteous food.

My three favorite samples were the rose caramel from Cocoa Velvet Chocolates, the Thai chocolate truffle (with lemongrass and curry powder) from Snake & Butterfly, and the white chocolate espresso bar from Forte Chocolates. Wow. 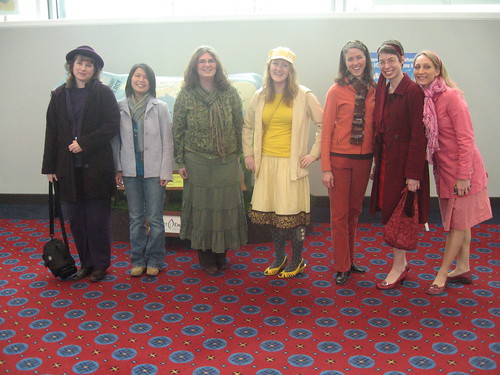 The Roy G. Biv all-girl precision team in the lobby 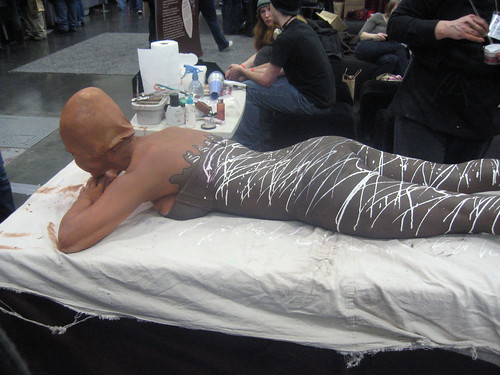 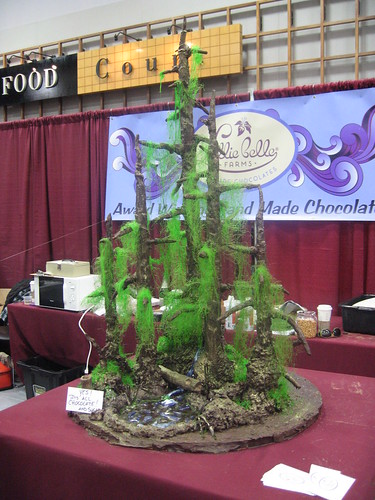 Per my recent call for questions, here's another reader interview with me. I hope you enjoy this as much as I did.

djelibeybi: During all your cancer treatment, how did you manage to continue to motivate yourself to write and to keep up your regular blogs? If there were days when you didn't manage it, what impact did this have upon you?

jaylake: The fiction writing eventually fell away, during month four of chemotherapy. That part of my brain essentially went to sleep for about three and a half months. Which was tough, because it's a huge part of my identity, as well as being a very important activity. The blogging never stopped. In fact, if anything it stepped up. While I was in treatment I seemed to be able to focus on that kind of brief, non-fictional narrative in a way that was very distinct from my fiction.

I never really fell down on the blogging except on infusion days and in the time immediately around my surgeries. I was frankly very depressed and upset about losing the months of fiction writing time.

djelibeybi: Are there particular characters (of yours) which have helped you through the treatment and recovery?

jaylake: I don't suppose I think of it that way, mostly because I don't think in terms of character so much as I think in terms of story. At one level, the character of Jay Lake in The Specific Gravity of Grief might fill that role. Though in truth I did not expect to become him so much as I have. I've also spent a lot of time this last year with Green, of Green, Endurance and Kalimpura, as well as the Before Michaela Cannon of Sunspin. Their stories have been important to me.

djelibeybi: Do you have a favourite book or story to which you return when you need a "comfort blanket"? (Mine is Ringworld by Larry Niven)

jaylake: Two series, actually. Discworld by Terry Pratchett, and the Miles Vorkosigan books by Lois McMaster Bujold. My tolerance for re-reading books is actually fairly low, but I've returned to both of those time and again. Plus I discovered while on chemo that I couldn't process new books mentally, but I could re-read familiar stuff. Which, incidentally, did include Ringworld. But also most definitely Bujold and Pratchett.

eljaydaly: You've spoken about how challenging it was to make the shift from short stories to novels (at least, I think you have!), and the difficulty with changing from one span of control to another.

jaylake: You are right. I certainly have addressed those issues before. And it was quite an intimidating transition. I ran scared of novels for a long time before I embraced the process and let myself become absorbed in them.

eljaydaly: Speaking as somebody who's made the difficult transition from writing "voicey" short stories to novels... how did you do that? How did you manage to stretch your thought process (or shrink it) so that muscles that were used to working in short, dense idea-chunks got used to handling a very long span? How did you teach yourself to switch from making a single very dense dish to making a seven-course meal?

jaylake: Essentially my early mistake was to assume that short stories and novels were the same craft. For me, at least, they are not. (Note, this is not generic advice, merely my observations concerning my own experiences.) A short story is like a piece of cabinetwork — finely crafted, with many carefully executed details. A novel is like framing a house — lots of big strokes and long runs of heavy, rough material. No matter how carefully one crafts a novel, it's simply a different animal than the supple twistiness of a short story.

The deceptive aspect, to further abuse my metaphor, is that both crafts use similar or analogous tools. Saws, hammers, braces. They just use them differently.

So the retraining of my thought processes was rather like the retraining of a cabinet maker to become a framing carpenter. I still bring my cabinetry skills into the housebuilding. The lessons learned from housebuilding have improved my cabinet making. But realizing and embracing the notion that short stories and novels are distinct-yet-related arts was a huge step for me.

As to how I taught myself to make the switch... The same way I've taught myself everything else I've learned in my career. Practice, practice, practice; leavened with editorial feedback, critical commentary from other writers, reader response and plentiful self-examination. But mostly practice. That is to say, writing more. Thinking about what I've written. Then more writing more.

eljaydaly: Day to day, how did that process look? How did you manage to wrap your head around it all? Compared with the eleven years it took you to start selling, how long would you say it took you to get a comfortable handle on such a different way of thinking and writing? Or did you actually not find it so very different? (I don't want to make an inadvertent assumption.)

jaylake: Well, it took me eleven years from when I first started writing short stories seriously to when I began to sell them. I wrote my first novel in 1994, The January Machine. Someday I might even produce a Lulu.com/ebook edition of that, just for laughs, but trust me, it's definitely a first novel. Post-millennial religious terrorism amid the collapse of the Westphalian model of statehood. With rogue AIs, zombies, global warming, and time travel.

Did I mention that it was a first novel?

So figure about ten years from that effort until I sold Rocket Science, my first novel in the independent press. And yes, as discussed above, very different. Along with lots of practice.

Did I mention how important practice is to developing as a writer?

eljaydaly: I'm not sure that question (er... bunch of questions) even makes sense. But there it is. I'd be interested in your insights, as always.

jaylake: Well, I hope I covered what you intended to ask. Certainly the questions made sense to me. Let's see if the answers make sense to you or any of my other readers.

ruralwriter: You've mentioned that you wrote hundreds (or some value of "a lot") of stories before publishing a pro story; are you ever tempted to return to any of those pieces and revise them? Or do ideas from those stories sometimes reappear in your newer work without your consciously returning to revise those stories?

Oh, wait, you probably wanted more detail than that. Off the top of my head, "The Rose Egg" (Postscripts issue one) was one such story idea pulled from the deep trunk and re-addressed. My short novel Death of a Starship is another. And certainly the old ideas re-appear in the newer work. I am occasionally alarmed at how closely I can unknowingly repeat myself. On the other hand, if I'm repeating myself, that probably means the idea was strong in the first place.

An example of this is my realization about two years ago that cancer has been a long time recurrent theme, albeit on a minor note, within my work. For years before it became a concern in my daily life, in fact. I'm not sure I ever would have noticed the trend if I hadn't fallen down that particular rabbithole myself.


That was fun. Feel free to ask followup questions in comments here. In a month or so, I'll probably post another call for new reader interview questions. My thanks to those who participated by asking this time.

Went alone to my oncology follow-up today. No scan this time, just bloodwork and office chatter with the doctor. As good as could be expected. The oncologist tells me that my 5-year survival odds have improved to 50%, which is excellent news. Her exact words were, "You're in as good shape as someone with stage IV cancer can be."

Scans in mid-April, with oncology appointment to follow. All right before Norwescon. So, three more months of being healthy before the next checkpoint.