Macmillan posts an excerpt of my novel Green — In support of the forthcoming trade paperback release.

The Ads Were More Boring Than the Super Bowl — Scrivener's Error with a number of interesting things to say about economics, publishing and the economics of publishing.

Welcome to Beautiful Jay Lake Family Campground and R.V.Park — I really need to go there. (Thanks to

The Entabulator — A hilarious short video snippet of pseudobusiness/pseudotechnical B.S.

Waterloo Teeth — Ok, this is just weird. As so much of history is. (Via @lilithsaintcrow.)

Some fins up! 100,000 sharks mass off Florida's beaches — Just when you thought it was safe to go back into the water.

Anonymous to security firm working with FBI: "You've angered the hive" — We are definitely living in the future.

Droughts, Floods and Food — Paul Krugman on the link between climate change and revolution. Warning: Facts and informed analysis not valid if you are a Republican.

Colbert on O'Reilly — The tides smugly and confidently presented as otherwise inexplicable evidence of God's hand? Also, this just in, Mars has no moons. And you people wonder why I think conservatives are basically nuts.

Faith Healing Parents Get Probation — I have always felt a very strong tension between my respect for religious freedom and the rights of parents on the one hand and the rights of children on the other. It's one thing for people to choose faith healing for themselves. Every adult has the freedom to be as wrong-headed as they wish to be in their private life. But to choose it for their children, who have no other recourse? Like vaccination denial, so far as I'm concerned, that's child abuse, pure and simple.

Fact Checking Palin on Reagan, Budget — Hmm. facts, meet perception. Perception for the win! Like I said before, Ronald Reagan was no Ronald Reagan. The man was a maundering fool who made no sense in 1980, he did not improve during office. He is virtually worshiped for things he is believed to have said by people who willfully ignore the deep and abiding hypocrisy of the man's actual historical record. I listened to the Reagan-Carter debates on the radio in 1980. I heard President Carter stammer and earnestly grope with facts to try to answer questions. I heard candidate Reagan genially thank the moderator for the question then go off on long, content-free riffs that neither addressed the issues under discussion nor made a whole lot of sense otherwise. But his smooth, confident delivery clinched the television audience. I have never, not from the very beginning, understood the cult of Reagan.

?otD: Can you hit the high notes? 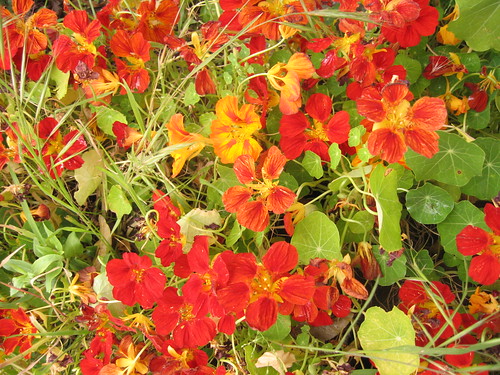 As usual, I've been busy. Last night was OMSI Science Pub, this time with game designer Jane McGonigal giving her talk, "Reality Is Broken: Why Games Make Us Better and How They Can Change the World." I believe her TED talk covers much of the same territory. Fascinating stuff.

Otherwise it was a day of Day Jobbery, editing Sunspin, helping

the_child make brownies and catching the male black widow spider we found in the kitchen cupboard while looking for the Crisco. Because life around Nuevo Rancho Lake is nothing if not exciting.

Today more of the same, hopefully with fewer black widow spiders, plus a girls' basketball game this afternoon.

Looking forward, once I wrap the current editing pass on this chunk of Sunspin, I'll be taking a few days off from the project to work on the newly-arrived Endurance copy edits, and possibly write one or two short stories. This is very unusual behavior for me on a novel project, but Sunspin is just too big to keep powering through, and other projects have due dates.

Any interesting insects in your life right now? Or copy edits?